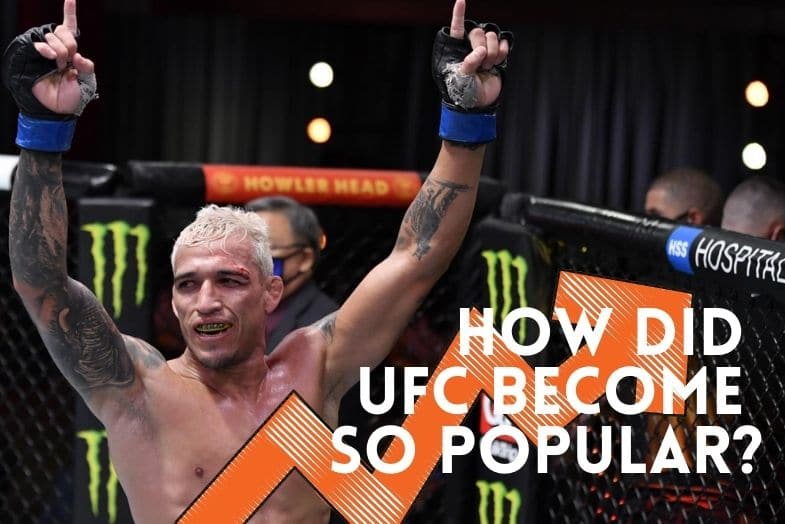 Every year we’re seeing more and more competitors within the UFC, with every mixed martial artist dreaming of being in the number one promotion.

The UFC is based in America, but the company is filled with global superstars, who’ve been a big part in the progression over the years. Let’s take a look at how the UFC has become so popular in this day in age.

When Did UFC Start?

A business plan and 28 investors came together to start WOW promotions and turn the intriguing tournament into a television franchise.

On November 12th, 1993, UFC 1: The Beginning was the first event hosted by the promotion in McNichols Sports Arena in Denver, Colorado. In that era, the UFC rules were extremely different to what they are now, and funnily enough there were no weight classes back then.

So, basically, it was a free for all between eight men in a one-night showdown. The winner of the first tournament was the all-time great and one of the most talented mixed martial artists of all time, Royce Gracie. The show proved to be a hit with 86,592 television subscribers on pay-per-view, which seems nothing now with the numbers these days, but it’s also a sign of it’s progression.

From being a bellboy in a hotel in Boston, to becoming the president of one of the biggest organisations in the world, is certainly something people normally only dream of. Whilst living in Boston, White claimed he was threatened by mobster Whitey Bulger and his associate Kevin Weeks. At a time where White was struggling, he didn’t realise, having no choice to leave Boston was the greatest decision he’s ever made.

White worked in the boxing scene, but after moving to Vegas, he dipped his feet into MMA with the UFC being a new organisation then. White started working as the manager of UFC Hall of Famers Chuck Liddell and Tito Ortiz

When he learnt Semaphore Entertainment Group, the parent company of the Ultimate Fighting Championship owner Bob Meyrowitz was looking to sell the UFC, he turned to his childhood friend Lorenzo Fertitta, who he pitched an idea of buying the company to. In January 2001, Lorenzo and his older brother Frank Fertitta bought the UFC for $2 Million and installed White as the UFC president.

How Did UFC Become So Popular [Key Moments]?

As we’ve touched up on the beginning of the UFC, since its creation, a number of reasons are behind the successes of the promotion becoming so popular today.

Under the new ownership, the company started to rise in popularity due to greater advertising. At UFC 40, the MGM grand arena was close to selling out with 13,022 people in attendance. The PPV buys reached 150,000, roughly double the previous events.

The ‘famous’ names within MMA made the event reach these heights, with a highly-anticipated dogfight between Ortiz and Ken Shamrock headlining the event. It’s said the event saved the UFC from bankruptcy, but the problems weren’t over.

By 2004, Zuffa had $34 million of losses since they purchased the UFC. The answer was to give the fans something they deserved. The Ultimate Fighter, a reality television show, debuted on Spike TV. It was free for viewers, and for fans to see up-and-coming MMA fighters, who competed in a tournament to win the ultimate prize of a spot in the UFC and a six-figure-contract.

White credited The Ultimate Fighter for saving the UFC. A light-heavyweight finale between Forest Griffin and Stephen Bonnar goes down as one of the most brutal, extraordinary fights in UFC history. The successes of the show are proven with it still running to this date, currently on Season 29.

For the UFC to become one of the world’s biggest organisations, they had to branch outside of the USA. We’ve seen events held all around the world, starting with Japan, all the way to Abu Dhabi, where they now have their very own ‘Fight Island’.

In November, 2012, the UFC signed their first female fighter, Ronda Rousey. She was on the roster of Zuffa’s own Strikeforce, before signing a contract with the UFC. This attracted a female audience, and female fighters knew they had the opportunity to join the biggest MMA promotion in the world, with a chance to beat the most dangerous woman in MMA at the time.

Rousey built a legacy that people wanted to destroy. Since, several names such as Holly Holm, Miesha Tate and Amanda Nunes have built their own legacies in the sport. The UFC started with only the women’s bantamweight division, now they have four divisions, with three different champions.

Ireland’s own Conor McGregor was the biggest influence on the UFC becoming so popular. Since his arrival to the promotion in 2013, his trash talk and talent has made him the millions he has in the bank today.

McGregor dominates the record books with seven of the top 10 PPV buys in the UFC. The top five buys are when he’s competed, with his matchup against Khabib holding the reins for the number one PPV at 2.4 million buys.

With the company being close to bankruptcy 17 years ago, and now worth in the region of $4 billion dollars, is a statement right there of how much the UFC has grown.

To say, UFC is coming close to boxing on PPV buys shows the expansion of the UFC. Floyd Mayweather vs Manny Pacquiao may still hold the record at 4.6 million buys, but McGregor’s Boxing bout against Mayweather is in a close second at 4.3 million.

Yes, this is still boxing, but in third place is the Khabib and McGregor fight, four other events from the UFC are in the top 10 PPV buys, which shows they are well and truly competing with a prestigious sport like Boxing.

The UFC’s global fan base grew to more than 278 million in 2017, with the promotion reaching 1.1 billion households in 163 countries.

In 2019, UFC reportedly had $900 million in revenue and smashed all the financial records out of the park. Even with the pandemic, White reported the promotion did even better in 2020, breaking company records.

Social media is massive in today’s world and the UFC’s number’s are surging by the year with a sky-high amount of followers. Their Instagram has 28.7 million followers, YouTube has 12.2 million subscribers, another 8.7 million followers are on their Twitter page, with Facebook pushing on with 28.3 million likes.

How Much Has the UFC Grown?

To sum it up in two words… A boatload. The company’s brand value has improved ridiculous amounts in recent years, having increased by 335 percent in a single year at one stage, with the popularity of their star fighters McGregor, and previously, Rousey building the promotion.

Every year, the promotion looks to host 40+ events, with the current pandemic, majority of the events being hosted in the UFC Apex in Las Vegas. The pandemic was a reason for Fight Island to be created in Abu Dhabi, but when these hard times are over, we will be seeing the UFC back in locations such as London, Rio and Stockholm.