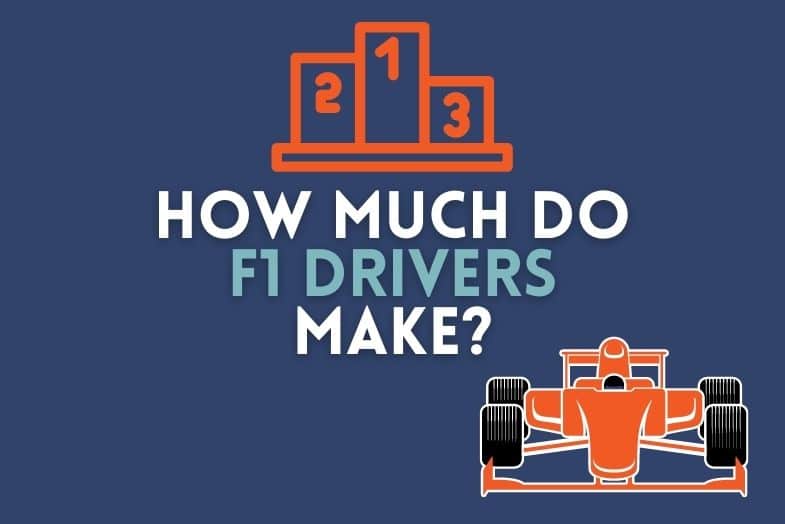 Formula 1 is a rich sport and there is a tonne of money flowing through it each year. Team owners pour billions of pounds of their fortunes into any success on the track, and that includes paying their drivers handsomely.

With so much pressure and danger involved in the sport, it’s easy to see why F1 drivers are compensated so heavily for the risks that they take. But how much do F1 drivers make? We’re going to take a closer look at how Formula 1 drivers line their pockets and who is the richest F1 driver.

How Much Do F1 Drivers Make?

Top drivers like Lewis Hamilton or Max Verstappen can earn tens of millions through their team salary but that’s not their only source of income. Personal sponsorship can play a huge role in what an F1 driver makes, with Hamilton earning an estimated £8.7 million per year in endorsements.

Formula 1 drivers are among the richest athletes in the world and a combination of their salaries and endorsements make their jobs very lucrative. Throughout their careers, drivers can amass small personal fortunes through their earnings.

How Do F1 Drivers Make Money?

Formula 1 drivers earn the bulk of their money through team salaries, but that’s not their only revenue source. Many driver contracts include performance-related incentives to encourage them to place as high as possible. Drivers also earn funds from sponsorships and brand endorsements.

Do F1 Drivers Get Paid Per Race?

Driver contracts in Formula 1 are a complicated business and no two are necessarily the same. Teams keep contract information closely under wraps and the intricate details are shrouded in mystery. However, it’s understood that Formula 1 drivers earn money through their salaries rather than per race.

Do F1 Drivers Get Prize Money?

Drivers get performance-related bonuses for successful races. For instance, Max Verstappen is projected to earn £12.29 million in bonuses this season if he wins the World Drivers’ Championship. Like most bonuses, these aren’t guaranteed so drivers have to fight hard for every WDC point.

If a driver doesn’t bring in enough revenue to a team they may be overlooked for someone who has a larger financial backing. For this reason, getting a seat in F1 is just as competitive as getting behind the wheel and racing against the fastest drivers.

How Much Do F1 Drivers Make Per Race?

A Formula 1 driver’s salary is spread across an entire season, rather than simply race by race. If the pay was per race, Lewis Hamilton’s £39.7 million contract would earn the driver £1.8 million each time he competes. This figure is based on the scheduled 22 races for the 2021 F1 season.

How Much Does an F1 Pit Crew Member Make?

The pit crew is an essential part of any Formula 1 team, and they can make or break a driver’s race. According to a report by Forbes, the average salary for an F1 team member was £84,000. However, it is estimated a crew chief can earn as much as £720,000 per year.

Other notable salaries for pit crew members include £252,000 for tyre changers and refuelling operators. Even carrying the tyres can earn a pit crew member as much as £195,000 per year. That’s pretty good going for a pit crew member considering they aren’t the star of the show receiving salaries like an Olympian athlete or UFC fighter.

Who is the Richest F1 Driver?