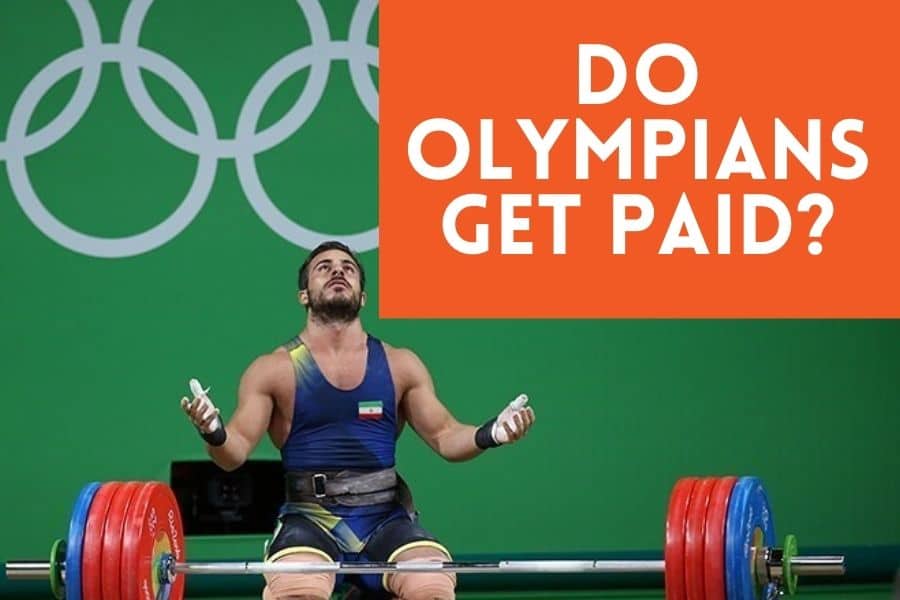 While the Olympics is one of the most famous sporting competitions in the world, it is only planned to take place every four years. So, while other professional athletes can rely on a steady income most of the year round, how do Olympic athletes get paid and make a steady income?

Indeed, athletes train for months, and sometimes even years to make it to the Olympic Qualifiers, let alone be selected to go to represent their countries. So do Olympians get paid for all of their time and efforts.

Do Olympians Get Paid to Train?

Depending on the sport, several athletes do not make enough income, whether it be the Olympics or other tournaments/competitions throughout the year, to the point where they are forced to take on a second job.

However, some athletes get financial support for expenses leading up to the Games, such as training supplies, equipment, etc, but this is only ever covered by sponsors, grants or scholarships (e.g. those provide by the country they represent or companies)

Athletes don’t receive any money from the Olympic Committee in order to prepare for the competition.

Do Olympic Athletes Get “Paid” to Take Part?

Olympic Athletes don’t receive any money from the Olympic Committee to take part in the actual games.

However, athletes may be paid by the country they are representing or by other institutions or sponsors that back them. So while there is no “Olympic salary” per se, athletes do usually get paid by other interested parties for taking part.

Olympic athletes pay is also often incentivised, with significant bonuses handed out to medalists. For example, in the 2018 Winter Olympics, the U.S. Olympic Committee paid out $37k for gold medalists, $22.5k for silver, and $15k for bronze winners.

Meanwhile, Singapore swimmer Joseph Schooling received a pretty pay day for his gold medal in the 2016 Summer Olympics, as Singapore reportedly was giving $1 million incentives to their Gold medal winners. Schooling is in small company, as he is Singapore’s only gold medalist in their Olympic history.

How Do Olympic Athletes Make Money?

Olympic athletes make money mainly through sponsorship deals, medaling in the Games, or participating in leagues for their sport outside the Olympics. Some athletes also receive grants or scholarships by countries or institutions which helps to cover the cost of their training.

How much money Olympic athletes can make through sponsorships largely depends on the profile of the athlete and the sport they are taking part in. Usain Bolt, for example, made $32 million in the year running up to the 2016 Olympics, with several of his sponsors (such as Gatorade, Virgin Media and Puma) paying him between $1 million to $4 million per year, while most athletes in most other sports will make just enough from their sponsorships to cover their training and travel costs.

Can Olympic Athletes Get Paid for Endorsements?

Yes. Endorsements are often the main source of income for many of these Olympic athletes and you’ll often find many commercials and other forms of merchandise (never forget the Wheaties box) shortly before and after the Olympics.

Olympic athletes are typically paid or receive funding from the country they represent, any institutions that provide them with a scholarships or grants, and sponsorships from companies they endorse.

Do Olympic Athletes Have Jobs?

While high-profile athletes from mainstream sports like football or basketball make a good living from their respective sports, many Olympic athletes have to get jobs alongside their training in order to make ends meet.

Canada’s Lanni Marchant, for example, competed in the 10,000m event in Rio but she is also  criminal defence attorney. Then there’s Australian’s Paul Adams who participates in the shooting events, between working as a nurse in a hospital in Brisbane.

How Much Do Olympic Track Athletes Make?

After Usain Bolt’s dash (pun intended) into the spotlight several years ago, the Jamaican’s accomplishments landed him world-wide fame, especially from one of his main sponsors, Puma. Due to his on and off the track accomplishments, Bolt is now worth a little over $90 million.

However, with track and field athletes being as competitive as they are, it’s hard to get recognized and anywhere close to Bolt’s level of fame and influence. Due to this, many runners, with both the Olympics and tournaments outside the Games, can make a little north of $100k.