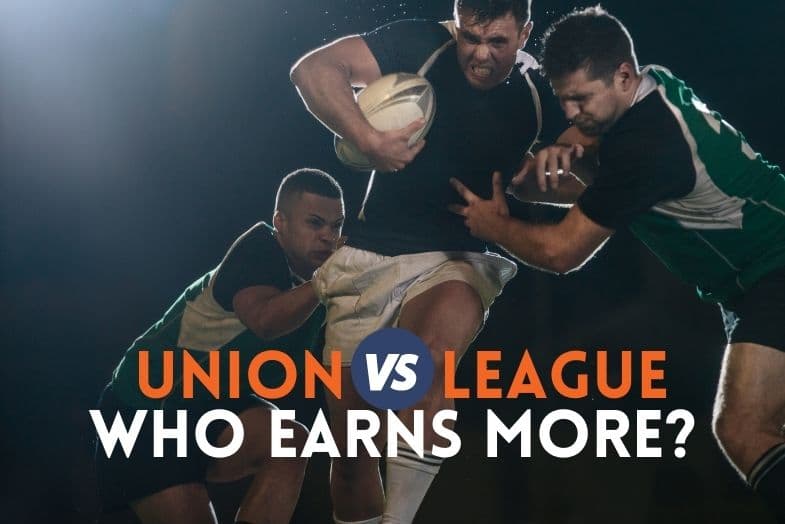 The game of rugby may be played on a pitch very similar to its cousin, football, but the money which swathes around the latter is not so freely available in the former.

However, the two codes of rugby – League and Union – have their own salary comparisons.

How Much Does a Pro Rugby Player Make?

Depending on the code of rugby and the agreement made upon signing a contract, professional rugby players can earn it can be anywhere from just £8,000 k a year for younger players right up to £1 million.

Due to the recent pandemic, a lot of sports clubs around the world have negotiated wage cuts for some of their players. Both rugby codes already had caps on their overall salaries for playing staff in order to help their leagues stay as competitive as possible.

Judging by the figures given by various outlets after details released from rugby club accounts, it does seem that Union players – who only went professional as recently as 1995 – tend to be paid more than their League counterparts.

However, as in any industry some will earn more than others – usually the ‘marquee’ members of the squads. These will be exempt from the budget, especially in the NRL (League) in Australia and the Gallagher Premiership (Union).

How Much Do Rugby Union Players Earn?

In club Union in England, the salaries for players range from £8,000k (academy players) up to £1 million. In Asia, the Japanese Top League is able to attract some of the game’s top names and their brackets are closer to £140,000k-£1 millionm.

Following Covid-19, the Union salary cap has been reduced to £5 million in the Gallagher Premiership, although there are different levels within, as explained on the official site link.

How Much Do Rugby League Players Earn?

Who is the Highest Paid Rugby Player in the World?

The Rugby Paper reported early in 2021 that both players are thought to be paid figures equating to around £1 million per year.

Although the salary caps being introduced have indeed made the leagues more competitive, there are calls for these to be scrapped from different areas – including fans groups, media commentators and ex-players and coaches.

This is because rugby clubs – especially those in the Super League – are being hamstrung by enforced financial restraints and more likely to lose players to the NRL. The Australian outfits can offer more by way of money, in addition to a hotter climate!

Is it possible that we will see a change to the game’s funding that will make it competitive around the world? We shall have to see what the powers that be decide is for the best.