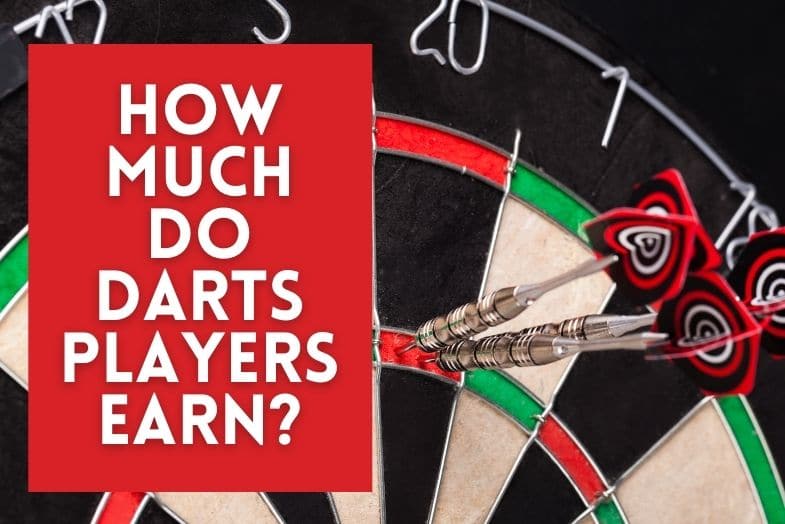 Darts, like any other sport, has big earners at the top of its tree. The current world champion, Gerwyn Price, earned £500,000 for winning his first world championship in January 2021.

However, not every player reaches the highs of winning world championships of course.

So, how much do professional darts players earn?

How Many Professional Darts Players Are There?

The Professional Darts Corporation (PDC) lists 166 players on their Order of Merit list. The world’s other professional darts outfit, the British Darts Organisation, was liquidated in 2020.

Darts is among the fastest-growing sports in the world, and has seen an upturn in female players following the successes of Fallon Sherrock against the top male players.

Put simply, darts players, like any other professional sportspeople, make money by being successful and winning tournaments. Since the PDC was formed in 1992, the money on offer for the top players has increased hugely.

Phil Taylor, world champion in 1995 and arguably the most successful player of all time, earned ‘only’ £12,000 for becoming the best player in the world that year.

Darts, like snooker, pool and boxing, is now under the control of Matchroom Sports, run by Eddie Hearn and before him his father Barry.

Matchroom has been credited with revolutionising darts, and the other sports it has control over, and has made household names of the likes of Phil Taylor, Raymond van Barneveld and Michael van Gerwen.

Sky Sports in the UK, which has a multi-billion-pound deal with the English football Premier League, has also spent big money to show the most popular darts tournaments exclusively live, including the PDC World Championships.

However, many professional darts players still supplement their income by playing in lucrative exhibition matches during breaks in the season.

How Much Do Darts Players Earn?

The earnings of darts players vary hugely. The two-year order of merit has world champion Gerwyn Price at the top with £1.3 million, and Scott Williams in 166th place with only £500 to his name.

So it is clear that as with any sport there is a huge disparity between the top players and the lesser lights in the darting world.

Who is the Highest Paid Darts Player?

In darts, and any sport, with success comes the rewards in the form of cash. So it is no surprise that three world champions are at the top of the PDC order of merit – Gerwyn Price, Peter Wright and Michael van Gerwen.

The PDC Order of Merit comprises the top-earning players over the past two years of competition: