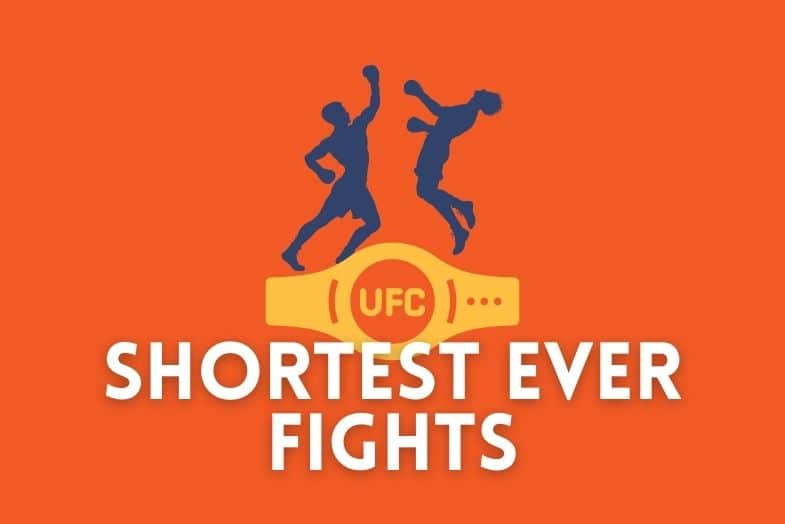 In the crazy world of mixed martial arts, the pre-fight hype plays a large part in the big picture. From the trash talk to the heated press conference and the stare-off at the weigh-ins and all the way to the fighter’s walkouts and introductions, the sport wouldn’t be the same without these ceremonial acts.

But in MMA, hours of hype could strangely lead up to a fight that ends in a handful of seconds. We’ve seen this phenomenon occurring on several occasions in the Ultimate Fighting Championship, with a fighter making short work of his opponent.

So which were the shortest fights in UFC history? Who holds the record for the fastest knockout in the organization? And what about the fastest submission victory.

It’s time to find out.

In the table below, we’ll list the the fastest 22 fights UFC history.

The shortest fight ever in UFC history took place on July 6, 2019, when Jorge Masvidal knocked out Ben Askren in just five seconds at UFC 239.

Usually, the first few seconds of a fight is reserved for the touching gloves, but after all the trash talk that preceded this welterweight bout, both fighters headed straight to business.

For Askren, wrestling is his bread and butter, thus, he immediately tried to take his opponent down, surging forward with his head down. Unfortunately for the former Bellator champion, Masvidal had anticipated this move, and punished him with a devastating flying knee to the head that spelled Askren’s first UFC loss.

As we can notice from the table above, the majority of the shortest fights in UFC history ended with KO/TKO. That’s because submissions require a bit more time to apply and force the opponent to tap.

So let’s take a look at the six fastest submission ever in the UFC.