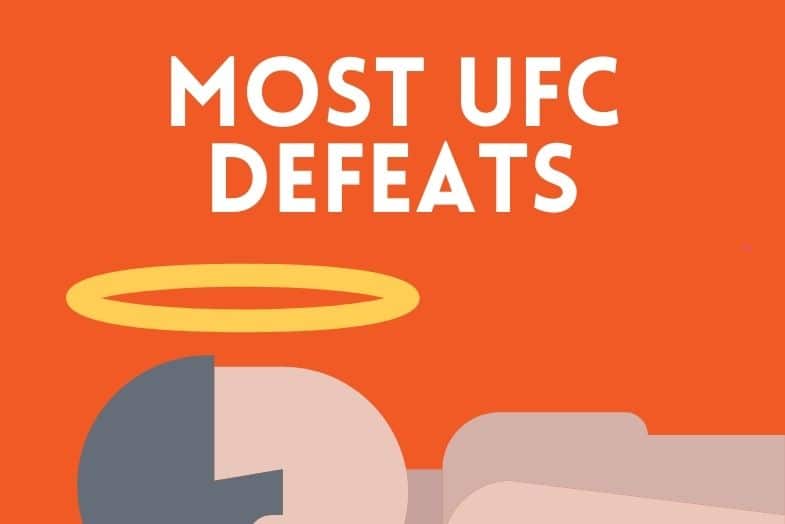 In the current day and age, the vast majority of mixed martial artists around the world dream of a long and prosperous stint in the Ultimate Fighting Championship.

After all, the sport’s biggest organization offers its fighters the chance to compete at the highest level while making a decent financial return.

Some fighters manage to maintain their job at the UFC for an entire decade or even longer, which naturally paves the way for them to break several records inside the organization.

However, a long UFC stint can be counter-productive in this regard, as instead of setting positive records, a fighter can unceremoniously find themselves on the top of some undesirable lists.

So who are the fighters with the most losses in the UFC’s history? And which fighter has been knocked out the most inside the Octagon?

First, we’ll begin our study with a table containing the names of the top five (who happen to be eight) fighters who have amassed the highest number of defeats in the UFC. We’ll also include the total number of fights they had throughout their stints with the company.

Who Has the Most Losses in the UFC?

Jeremy Stephens is the fighter who suffered the biggest number of losses in UFC’s history. On the 17th of July 2021, the American was submitted by Mateusz Gamrot, marking his 18th defeat under the organization’s banner.

This turned out to be his final fight for the promotion, as the management opted against renewing his contract.

Unfortunately for ‘Lil Heathen’, he’s also known by a section of casual fans as the one who was publicly mocked by Conor McGregor during a live press conference.

Nevertheless, the die-hard fans of the sport would tell you that the hard hitter deserves better. One of the reasons why he amassed such a large number of defeats is the fact that he continuously competed against the very best of the divisions (whether at lightweight or featherweight).

The American’s long list of defeats includes fights against José Aldo, Frankie Edgar, Charles Oliveira, Max Holloway and Anthony Pettis, all of whom held UFC gold at some point of their respective great careers.

Although he was never regarded as an elite fighter nor enjoyed a memorable trilogy against another UFC fighter, Stephens admirably served as a gatekeeper at his weight class for the majority of his UFC stint and was a popular figure amongst the fans and the promoters thanks to his entertaining fighting style and vicious knockouts.

Which UFC Fighter Has Been Knocked Out the Most?

As of February 2022, there are five fighters who share the record for the most KO/TKO losses in UFC. Gabriel Gonzaga, Frank Mir, Alistair Overeem, Stefan Struve and Donald Cerrone have each assembled eight knockout losses.

Unsurprisingly, four of them are heavyweights, which is the division that witnesses the highest percentage of KO finishes.

But despite being the intruder on the list, Cerrone might eventually end up on top, considering the fact that he remains an active UFC fighter.