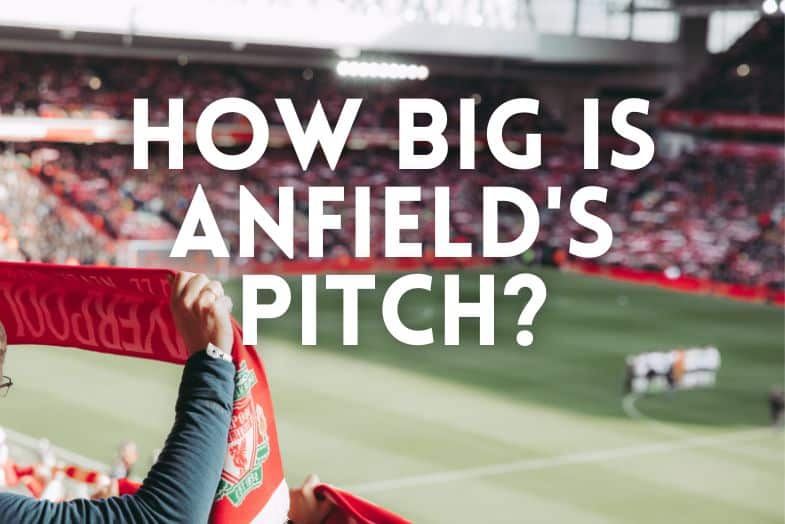 Seating over 53,000 supporters and being home to one of the greatest teams in the world, Liverpool’s Anfield Stadium has grown a special reputation for iconic moments, passionate fixtures, and an unforgettable atmosphere.

Finished in 1884, the historic ground took 76 years to complete, making Anfield one of the oldest grounds in the English professional game.

While other top European sides have moved to flashy multi-million-pound stadiums and abandoned their traditional home grounds, Liverpool have remained in Anfield and kept its original pitch dimensions from the 80s.

But how does Anfield compare to modern pitch sizes? And does its historic size affect Liverpool in any way?

The Football Association (FA) set the legal range for a pitch to be between 90m-120m in length and 45m-90m in width. Most of the Premier League pitches are different sizes however they must all be longer than they are wider as stated by the FA.

Is Anfield a Small Pitch?

Although Anfield is considered by many to be a narrow pitch, with the stands located very close to the touchlines, the famous ground is actually the seventh largest pitch in England.

Built-in 1884, Anfield is one of the most iconic grounds in the world with the pitch and stands still keeping the dimensions that were originally built. Unfortunately, new rulings and regulations have deemed it possible for Premier League sides to have pitches as large as 105m-65m, leaving Anfield’s historic size in a constant debate between football’s governing body.

UEFA’s official ruling is that pitches for international fixtures must be 105m-68m, meaning that if England were successful in their bid to host the 2028 Euros, Anfield would not be eligible as a usable stadium due to its narrow dimensions.

As the second largest football ground in the United Kingdom and seating 74,879 people, Old Trafford is considerably bigger than Anfield with a pitch dimension of 105m-68m.

Old Trafford was opened in 1910 and is second in size only to the famous Wembley Stadium which is an amazing 115m-74m.

Why Do Liverpool Use a Smaller Pitch?

Liverpool uses a smaller pitch than many top European football clubs because they have kept the original dimensions that were constructed in 1884.

This smaller ground has also benefited Liverpool greatly in recent years as the club has adopted a much higher pressing style of play, a style easier to use when there is less ground to cover in a short burst attack.

Historically, attacking sides thrive on larger pitches as they can dominate games whilst more defensive teams favour smaller grounds in order to limit the available space for stronger sides.

Liverpool’s high pressing style, mixed with a pitch just a short distance from passionate home supporters, has made Anfield a difficult ground to visit for the opposition in recent seasons.

Interestingly, from 2018-19, Liverpool averaged 1.33 points per game on pitches bigger than 7000sqm, however, they averaged 2.6 points per game at Anfield which is 6868sqm. This further highlights how Liverpool has been able to use the smaller Anfield pitch to their advantage with a different style of play.