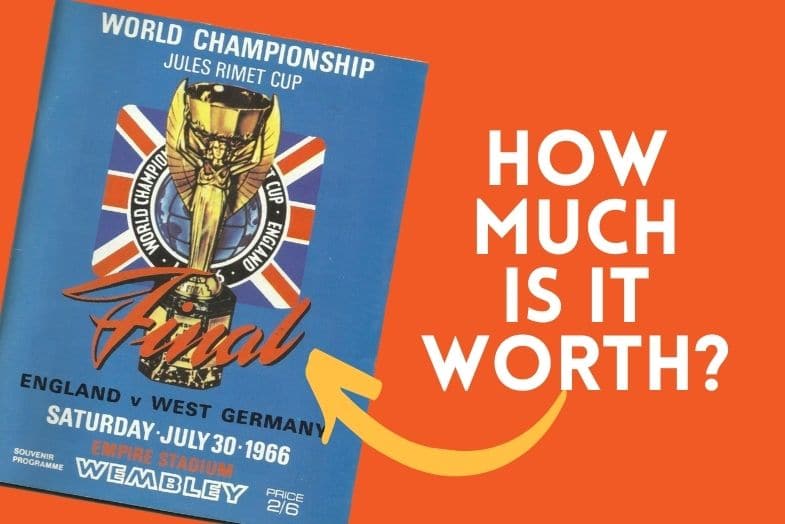 The 1966 World Cup Final is England’s greatest footballing achievement in recorded history with the Three Lions earning their first-ever and only World Cup – the ultimate level of international football success.

A hat-trick from Geoff Hurst and a 78th-minute goal from Martin Stanford Peters helped the Three Lions famously beat West Germany 4-2 at Wembley Arena on July 30th, 1966, marking an occasion that will likely never be forgotten in English football history and making icons of the international players.

A great way for fans to remember this incredible feat is through match memorabilia such as tournament programmes – small booklets associated with a live sporting event containing the proposed starting lineups and other details of the match.

However, with the internet offering scammers easy access to selling fakes and reprints, many devoted memorabilia collectors may unwillingly be purchasing fake programmes believing them to be the originals from 1966.

With fakes often being difficult to identify, join us as we go through how to decipher an original programme from a fake and how much your 1966 World Cup programme is worth.

How Can I Tell if My 1966 World Cup Final Program is Original?

An original 1966 World Cup Final program will have several distinctive differences to a fake including signs of age. This can be seen through possible fading of the colours, less mint shiny conditioned paper, and paper edges being less sharp.

FootballProgrammes.net offers a great insight into the comparison between original, reprinted, and fake final programmes as there are several elements that an average collector may not think to examine when purchasing a 1966 World Cup Final programme.

Original programmes should have thicker outer cover pages with the inner pages being much thinner, if the thickness and weight of the pages are all similar, this could be a fake.

The total weight of programmes can also be a solid giveaway if the item is fake, original programmes should weigh 130 grams whereas reprints will often weigh 95 grams or slightly more.

Colour Differences Between Original and Fake

A useful way to identify whether your programme is original or not is through the colours used on the copy. The original version has a distinctive Chelsea blue on the front cover with the lettering of “England v West Germany” also a slightly blueish colour.

On page two of the original, the Players No.6 cigarette packet picture will have a two-tone black and white stripe on the cigarette pack. This is also a sign to look out for on the rear of the programme, as the original has a picture of a Cadet cigarette packet, the colour of the stripes should be a scarlet red colour with many fakes showing an orange colour instead.

Despite being a great way for collectors to gather rare programmes, reprinting causes issues when collectors are unaware if their purchase is an original or not. The final programme has been reprinted on three different occasions, each version looking very similar to the original.

Some printers will include the reprinted date when printing, as the original one is from 1966, this should be a solid sign whether you have an original or reprinted copy.

The first reprint of the 1966 World Cup Final programme was just after the final in 1966 as England won, making the programme a great collector’s item to own. The second was reprinted in 1970 and the third, and most recent, in 1999.

Page four of the original final programme has a distinctive difference to any reprints, with the Earl’s tie having a distinct pattern whereas the reprints are a simple dark colour.

On the day of the World Cup Final, the programme was printed in two separate stages as the team lineups were added to the prepared version on the day. The reprints use the same paper throughout the programme as they did not need a two-stage process.

The second reprint in 1970, although very similar to the original, has some noticeable colour differences to help collectors. On page two of the programme, the logo on the cigarette box should be light and dark grey, however, on the reprint, it is one single shade of grey. The front cover of the reprint also has a background with a lilac colour which is not shown on the original.

Reprinted even more similar to the original, the third and final reproduction of the 1966 programme is harder to distinguish between the original compared to the first and second versions.

A good indicator is the colour of the Union Jack flag on the programme, with the reprint from 1999 having a navy colour on the flag rather than the Chelsea blue used for the final original.

Perhaps the easiest sign that the programme is a reprint is on the back cover bottom’s right-hand corner. In black print on a white margin, it will say “REPRINTED 1999”. FootballProgramme.net suggests checking to see if this may have been removed on suspect copies, so look for the signs of its removal.

How Much is the 1966 World Cup Programme Worth?

The estimated value for an original 1966 World Cup tournament programme is between £60-£100 depending on its condition on websites such as eBay.

As a famous tournament in England football history, the tournament programme for the competition is a sought after collector’s item. Despite this, it does not sell for as much as the original 1966 World Cup Final programme due to the importance of the final.

As a piece of memorabilia that signifies the greatest achievement in English football for the Three Lions, the estimated value of a mint condition 1966 World Cup Final programme is in the region of £400-£500 with some even listed for £1,000 on websites such as eBay.

In 1966, the programme would’ve been sold for roughly 50p further emphasising how the value has incredibly skyrocketed since the famous tournament.

For those looking to add this incredible piece of memorabilia to their collections, the 1966 World Cup Final programme can be purchased on websites such as eBay.

Whilst eBay is the most popular destination for people looking to buy sports memorabilia, other specialist sites like FootballProgrammes.Net and VintageFootballProgrammes.com can sometimes also offer these sought after items.