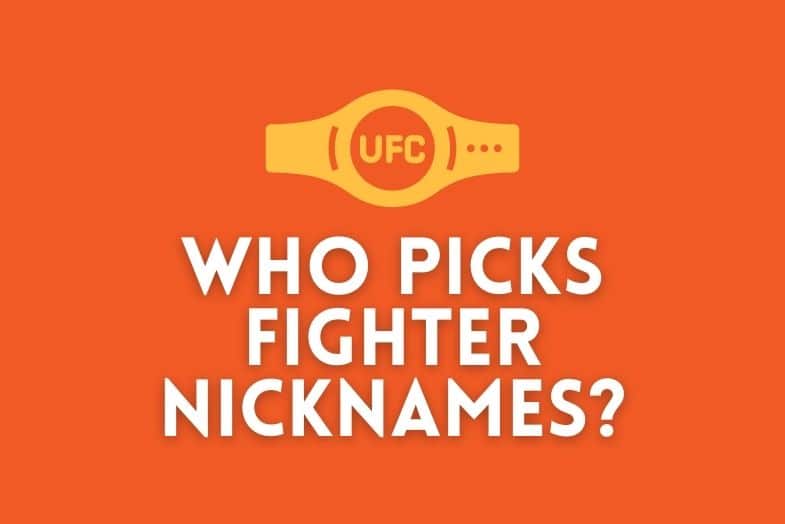 Let’s imagine for a second the crazy world of mixed martial arts without the fighters’ colorful nicknames. It just wouldn’t be the same.

Even though a large percentage of these monikers can be a bit cheesy or simply meaningless, they still add a certain flavour to combat sports in general.

In this regard, the Ultimate Fighting Championship isn’t any different. Whom amongst us doesn’t get goose bumps when hearing Bruce Buffer screaming a fighter’s nickname from the bottom of his lungs?

But where do these nicknames come from? Do fighters invent their own nicknames? And which are the best monikers in UFC history?

Do UFC Fighters Pick Their Own Nicknames?

Every UFC fighter is entitled to choose the nickname that he wants prior to a fight, and the company’s ring announcer (who’s mainly Bruce Buffer or Joe Martinez) will add it to the fighter’s name during the pre-fight introduction.

In most cases, the fighter would want their nickname to be placed in the middle, between their first name and their surname (e.g. Anderson ‘The Spider’ Silva, Randy ‘The Natural’ Couture, Chuck ‘The Iceman’ Liddell).

But in other cases, the moniker can be placed before the fighter’s first name (e.g. ‘The Notorious’ Conor McGregor, ‘The Axe Murderer’ Wanderlei Silva).

However, some nicknames can become so catchy that they end up replacing the fighter’s first name altogether in the fan’s mind (e.g. ‘Shogun’ Rua, ‘Rampage’ Jackson, ‘Minotauro’ Nogueira), or even his last name as in the case of heavyweight legend Mirko ‘Cro Cop’.

How Do UFC Fighters Get Their Nicknames?

There are various ways in which an MMA fighter can get his nickname, and the UFC roster is filled with all sorts of stories. Some are made by the fighter himself, while others are created in the gym by a teammate or a coach, and it can also be born from a personal story or even have a funny tale behind it.

For instance Chang Sung Jung – better known as ‘The Korean Zombie’ – earned his nickname while sparring at the gym. A teammate noticed how the featherweight keeps coming forward despite eating punches and never seemed to get tired, just like a zombie. The term ‘Korean’ was later added to the moniker by a Japanese promotion.

In other cases, the nickname could be completely unrelated to fighting. For instance, former UFC flyweight contender Ian McCall earned his nickname because his friend’s child simply called him ‘Uncle Creepy’. The fighter immediately thought it would work perfectly as a nickname, and the fans agreed.

Sometimes, a fighter’s nickname can prompt him to launch new antics. For instance, knockout king Derrick Lewis revealed that pounds his chest like a gorilla after a fight because he has to live up to ‘The Black Beast’ tag.

Throughout the organization’s history, we’ve witnessed countless great UFC nicknames within all weight classes and this is our pick of the best ten ever.

As we can see, our Top 10 list is filled all sort of nicknames. From frictional creatures like Zombies and Minotaur, to light-hearted ones like ‘Uncle Creepy’.

But perhaps ‘Shogun’ remains the most iconic of all monikers. After all, this nickname completely replaced Rua’s first name, and it absolutely fits him due to his legendary run in Japan.