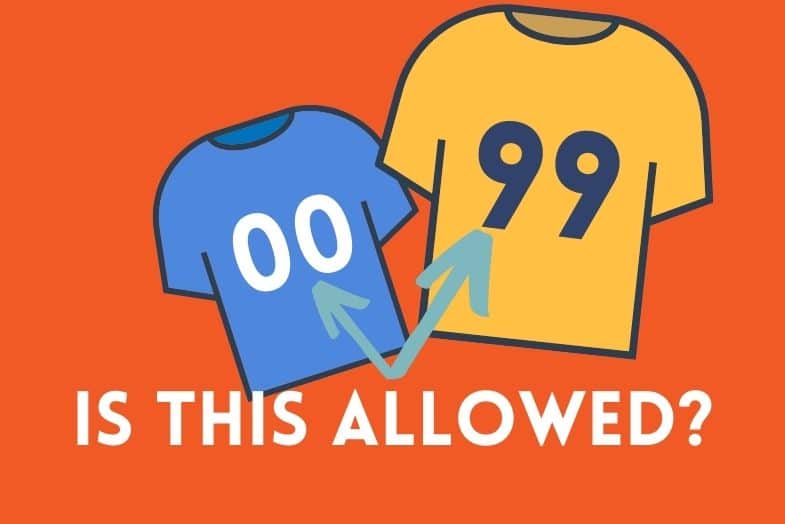 Today, Premier League clubs have an ever-expanding reach to connect to fans and anyone even slightly interested in football. This also means English clubs have more ways than ever to make money.

When it comes to gear, footballers’ boot deals might generate the most income. Monetarily, squad numbers may only be a drop or two in the financial bucket. However, famous players sell kits by the thousands upon thousands every year.

Every time a new kit comes out is a new opportunity for clubs to cash in. But that isn’t the end of it, players can even change squad numbers, demanding the most loyal of fans to once again reach deep into their wallets.

But squad numbers haven’t always been part of the game. When did they first come about? And what numbers are allowed anyway?

In the Premier League, players can wear any number on their kit as long as it is unique within their squad. The only stipulation from the league is that the number must be between 1 and 99.

In the rules of the modern game, players can wear just about any number regardless of position. However, most outfield players in the starting eleven will usually wear the numbers 2-11 which are traditionally correlated to the position.

Following this time-honoured tradition, most goalkeepers will wear the number 1 or 13.

Can You Wear Number 0 in the Premier League?

In the Premier League, players cannot wear the number 0 on their kits. However, they can wear any other number from between 1-99.

Can You Wear Number 99 in the Premier League?

Players in the Premier League can wear the number 99. This is the highest squad number allowed by the league.

While the Premier League allows players to wear numbers between 1-99, it is rare to see numbers on the higher end of that scale. It is especially rare to see a player sporting the number 99.

History was made in December 2019 during an EFL Cup quarterfinal between Aston Villa and Liverpool. No, we’re not talking about Villa’s spanking The Reds 5-0! We’re talking about Tom Hill being the first player in the history of English football to wear the number 99 in a competitive match.

The highest number worn by a player in the Premier League was 76. When Man City’s Manu Garcia made his league debut, his squad number 76 beat out that of his teammate Kelechi Iheanacho’s number 72 worn during the same season.

Players are allowed to change their squad numbers in-between seasons. The only exception for a player to alter his number during the season is if he has been transferred or loaned out to a new club.

At a scheduled date before every season, each of the 20 clubs must submit their squad numbers to the league. These squad numbers will be announced by both the clubs and the league itself once the deadline has been met. You can typically find a squad number list on the Premier League’s website.

When Did Squad Numbers Come into Football?

The first recorded use of football squad numbers dates back to 1911. The match was between Sydney Leichardt and HMS Powerful of Australia.

The first club to use squad numbers in England was the amateur football club, English Wanderers. The amateurs donned their squad numbers while taking on Corinthians at Stamford Bridge in 1914. There must have been some magic dust on those kits because the Wanderers emerged victorious in a 4-2 outing.