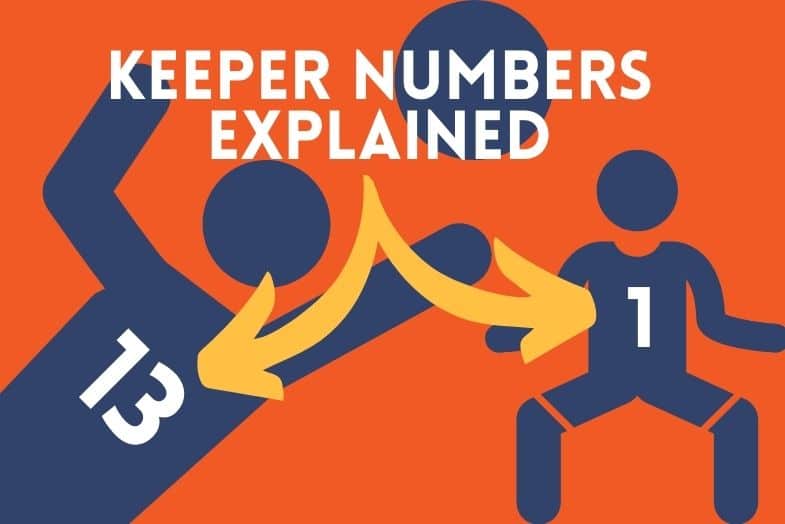 Today, footballers all over the world must have more flexibility then ever when it comes to shirt numbers. Many may forget that squad numbers weren’t always part of the game. And even when they became the norm, it was essentially to designate player positions.

In the modern game, FAs all over the world have laid down rules and restrictions concerning squad and shirt numbers. These changes have created virtually endless possibilities for goalkeepers and outfield player numbers.

So why for instance in the Premier League, do a majority of goalkeepers wear the number 1 shirt? As with all things steeped in tradition, many choose not to deviate from the mean. Let’s look at why some numbers seem to be reserved for goalkeepers only.

The most common shirt number for a first-choice goalkeeper in the Premier League is the number 1. The second choice or backup keeper will typically wear a shirt number of 12 or 13.

Why Do Goalkeepers Wear Number 1?

Normally in football, the first lineup will be numbered 1 to 11 with the goalkeeper taking the number 1 shirt. This is because, from the goal line, they are the first player on the pitch. Moving towards the opponent’s goal, player shirt numbers will increase up to 11.

While quite a rare occurrence, it is possible for outfield players to wear the number 1 shirt. This would be in place of one of the many goalkeepers on the squad. Since the 70s, both the Netherlands and Argentina national teams have adopted a policy of assigning squad numbers alphabetically.

Edgar Davis famously lifted the No 1 shirt from Barnet’s starting goalkeeper Graham Stack. He was able to do this because he had been appointed player-manager for the Bees.

In the Scottish Premier League, Derek Riordan wore number 10 for Hibs but was transferred to Celtic in 2006. After a rather unsuccessful two year stint, Riordan returned to Hibs but found another player already wearing the number 10. Instead, he opted for the number 1 shirt as a short-term solution.

Other famous No 1 shirt-wearing outfielders include Partizan’s Simon Vukčević in 2004-05 and Atletico Mineiro’s Diego Souza in 2010.

Why Do Goalkeepers Wear Number 13?

Traditionally in football, the first choice goalkeeper wears the number 1 shirt. Backup goalkeepers were introduced to the Premier League in the 1992-93 season. With squad numbers introduced the following year, most clubs opted to give the second choice keeper the new and unused number 13 shirt.

For much of football history, outfield players would be numbered 2-11, but in the modern game, squad numbers are persistent and not necessarily related to the position. This has resulted in goalkeeper and outfield players breaking tradition and wearing different shirt numbers than expected.

Other European football associations have different squad number rules and restrictions. For example, in France backup keepers must wear the number 16. And in Spain, goalkeepers can only wear the numbers 1, 13, or 25. Some clubs dedicate a squad number to their fans, with the number 12 commonly chosen to represent the fans being the ‘twelfth man’ on the pitch.

Why Do Goalkeepers Wear Number 31?

In the Premier League, the numbers 12 and 13 are common squad numbers for backup keepers. But they can wear any shirt number that falls within league rules. The number 31 is a common choice for keepers as a mirror-image of the number 13 and may also indicate the player is the third-choice option.

There are instances where the first-choice goalkeeper has donned the number 31. Manchester City’s Ederson is perhaps the most famous example.

Football purists may not like it, but the days of position-based shirt numbers are well, for lack of a better term, numbered. Some keepers have become quality sweepers and even goal scorers.

But like every component of the beautiful game, every tradition has a reason or at least a story. Squad numbers will continue to evolve until one day, we may even see characters on the back of the football shirts that we could have never imagined!