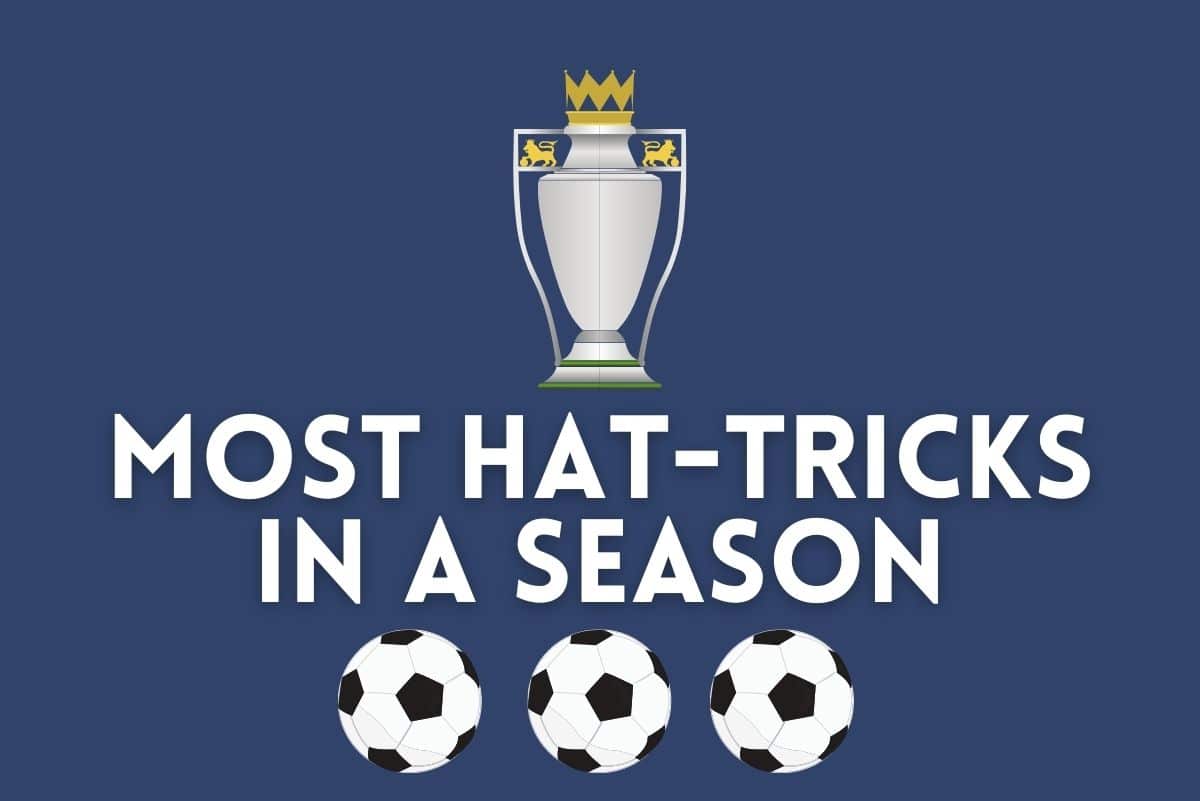 As scoring a goal is one of the most important actions a player can do in a football match, scoring three of them in one game is always remembered as an iconic moment in a player and club’s history.

Transitioning from cricket in the early days of football, when a bowler would take three wickets in three consecutive bowls, the phrase hat-trick is always used to state when a footballer has scored three goals in a single match.

The ‘perfect hat-trick’ is often seen as a hat-trick where the player scores three goals with his right foot, left foot, and header. This can be in any order as it is one of the most difficult feats to achieve on a Premier League football pitch.

But which players have scored the most hat-tricks in a single Premier League season? And are there any players likely to set a new record?

Most Premier League Hat-Tricks in a Season

Footballing legend and highest Premier League goal scorer Alan Shearer was always going to have a place on this list with the former Blackburn and Newcastle striker netting 283 goals in 559 games during his career.

Current England and Tottenham captain Harry Kane is one of the most clinical finishers the league has ever seen and in the 2017-18 season he showed just how dangerous in front of goal he can be.

Kane managed to score four hat-tricks in the campaign, netting three goals against West Brom, Stoke City, Leicester City, and Hull City. In the process he finished the season with his highest goal tally to date, scoring 30 goals in 37 league games.

Devastatingly powerful, merciless in front of goal, and the joint third-fastest sprinter in Premier League history, Erling Haaland is unlike anything the Premier League has ever seen before.

Joining Manchester City for the ongoing 2022-23 season, the Norweigan striker has hit the ground running at the Etihad, scoring 17 goals in 11 league games at the time of writing this.

Haaland netted three hat-tricks in his first eight games for Manchester City, an unbelievable record for a 22-year-old player in their first Premier League season.

His first hat-trick came in a 4-2 win over Crystal Palace, followed by another hat-trick in a 6-0 win over Nottingham Forest. Haaland’s third hat-trick is one for the history books, coming in a 6-3 demolition of rivals Manchester United.

As Haaland still has a potential 22 games left to play in the 2022-23 season, he could well be on the way to set the new record for most hat-tricks in a single Premier League season.

Ruthless in front of goal, deceptively quick, and one of the greatest technical players of his time, Sergio Aguero was born to score goals.

The Argentinian forward became a Premier League icon when he scored the title-deciding goal for Manchester City in 2012, helping the club lift their first EPL title in 44 years.

That goal was just one of many, with Aguero scoring 184 goals in 275 games for Man City – an impressive goal ratio of 0.67 goals per game (the second-best in Premier league history).

From 2017-2019, Aguero was at his most lethal, scoring three hat-tricks in two different seasons, further adding to his already impressive legacy in the Premier League.

His first of three hat-tricks came in the 2017-18 season in a 6-0 win over Watford, the second in a 3-1 win against Newcastle United, and his third hat-trick when Man City dominated Leicester City 5-1.

After being nicknamed ‘The King’ and finishing as a top scorer in a team called ‘the invincibles’ it should come as no surprise that Arsenal legend Thierry Henry is on this list.

The prolific Frenchman dazzled the Premier League after signing for the Gunners in 1999, netting 175 goals in 258 EPL games.

During Arsenal’s unbeaten season in 2003-04, Henry scored two hat-tricks to add his name to this list – scoring against Liverpool and Leeds.