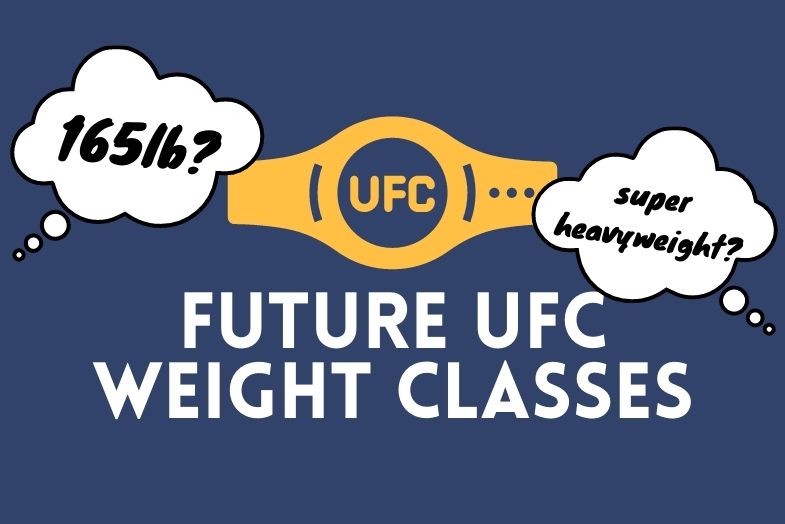 As the vast majority of observers would agree, mixed martial arts is one of the biggest rising sports in the world, if not the biggest.

Despite the emergence of new competitors from left and right, the Ultimate Fighting Championship remains the main the flag bearer for the sport.

While we could name several reasons that justify the company’s meteoric rise since the beginning of the new millennium, the limited number of weight classes have probably played a significant role in the process.

Unlike boxing organizations that crown an excessive number of champions, the UFC makes it much easier for the fans to track the championship picture and identify the cream of the crop.

But will the company maintain a limited number of weight classes? Or will we witness the launching of new divisions? And which weight classes could they possibly be?

How Many Weight Classes in UFC?

As of 2017, the Ultimate Fighting Championship has adopted 12 weight classes in total; eight for men and four for women.

The current divisions are as follows:

Why Does UFC Have So Few Weight Classes

The UFC prefers to adopt a limited number of weigh classes in order to increase the competition and pit elite fighters against one another.

UFC president Dana White likes to call the shots, and as long as he’s in charge, a top fighter would find it hard to dodge big fights.

Due to the limited number of divisions, the best fighters in the world often end up crossing paths inside the Octagon, which is the exact opposite of boxing, where the large number of weight classes allows a champion to hide behind his fences and dodge a tough fight against another champion in a different division.

The newest weight class in the UFC remains the women’s flyweight division which was introduced late in 2017.

When the company first started back in 1993, the concept of weight classes wasn’t even adopted, it was only introduced later in 1997 with the creation of two weight classes; heavyweight and lightweight (which was the equivalent of today’s light heavyweight division).

During the organization’s early years, the branding of the divisions and the weight limits changed back and forth, but thankfully, order was restored once and for all when Zuffa bought the UFC back in 2001.

This is when the format that we see today began to take shape, with the company adopting five weight classes; heavyweight, light heavyweight, middleweight, welterweight and lightweight (although the latter remained practically inactive between 2003 and 2006).

At first, White wasn’t a major fan of the smaller weight classes, but after purchasing another organization called WEC and merging it with the UFC in 2010, the new talent at his disposal convinced him otherwise.

Therefore, two new divisions were created – featherweight and bantamweight – with the last two WEC champions (José Aldo and Dominic Cruz) automatically crowned as UFC champions even before stepping a foot inside the company’s infamous Octagon.

However, Dana’s new-found passion for the smaller weight classes didn’t stop there, as the organization launched a four-man tournament in 2012 to crown a new flyweight champion.

White had previously reiterated that he doesn’t want women fighting inside his Octagon. But Ronda Rousey’s charm and stardom were just too tempting.

So in 2013, Rousey made history as the first Woman to hold UFC gold, with the company crowning her as the bantamweight champion.

A women’s strawweight division was then added in 2014, before the introduction of two additional weight classes for the ladies in 2017; featherweight and flyweight.

The UFC is is yet announce the launch of new weight classes, and the year 2022 started with the same 12 divisions mentioned above.

Nevertheless, there has been constant talk in the media concerning the addition of new weight classes in the future. So, let’s check out the most discussed potential divisions and rate their likelihood.

However, president Dana white has fiercely opposed the idea every time someone brings it up. The UFC president labels the super heavyweight division as a “freak show”, claiming that its fighters lack the required athleticism and technical skills.

While it might sound like a harsh criticism to say the least, White does a have point. Perhaps we can find some super heavyweights who can be described as legitimate MMA fighters, but their number would probably be insufficient for the creation of a new active division.

Once upon a time, the smaller weight classes had no place in the UFC. However, the featherweight and bantamweight divisions treated us to some thrilling fights following their introduction in 2011, encouraging the company to add a flyweight division.

As for the strawweight division, it’s one of the most popular weight classes for women. But would the UFC adopt one for men?

The strawweight and super heavyweight divisions lie on opposite ends, but they face a similar problem; the lack of fighters.

However, the organization proved its willingness to bet on the smaller weight classes, which keeps some hope for every strawweight dreaming to compete in the UFC one day.

Some organizations in Japan have strawweight divisions, so perhaps the UFC will one day take a page from its Asian counterparts and launch their own division if they find enough fighters to fill the roster.

This is one of the most discussed potential new divisions as of late, especially following Khabib Nurmagomedov’s latest announcement.

The former UFC lightweight champion decided to launch a new organization called Eagle FC, and it will apparently adopt a 165 pounds division.

Today, lightweight (155 pounds) and welterweight (170 pounds) are arguably the two most exciting and studded divisions in the UFC.

However, some fighters claim that they don’t fully fit in either division. They are too small for their welterweight competitors and at the same time too big to make the weight cut for 155 pounds.

Therefore, a new 165 pounds division could offer a fitting home for a host of fighters, while the welterweight limit would be raised to 175lb.

An interesting idea for sure. Let’s see if it receives Dana’s seal of approval in the future.

In the current day and age, the organization is struggling to maintain an interesting featherweight division for women due to the lack of elite talent.

Therefore, a women’s lightweight division comes out as an absurd and unfeasible idea, as the UFC would find it incredibly difficult to sign a host of legitimate fighters who can compete at 155 pounds.