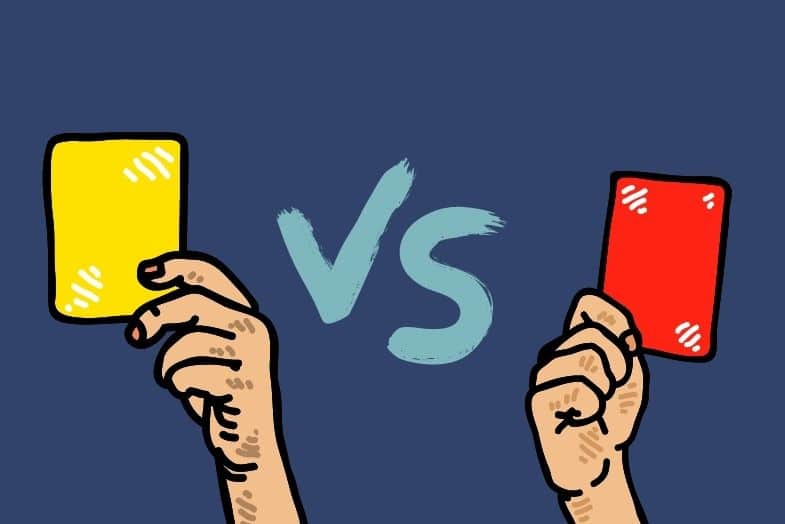 Used as a means of maintaining order and dealing the correct punishment for any offences in the game, yellow and red cards have been used by match officials in almost every game of football since their introduction in the 1970 World Cup.

While referees have the final decision, there are a solid set of rules listed by the Football Association that determine whether a certain incident in a game requires a caution or official sending off for the committing player.

But what is the difference between a yellow and red card? And what makes a challenge worthy of being sent off?

Booking vs Sending Off

Being booked in football means that a yellow card is shown by the referee to a member of the playing squad or coaching staff when they have committed an offence, the yellow card serves as their first official warning that they have broken the rules.

If a player or staff member repeats this or any other offence, known as a second yellow, they will receive a red card and be sent off by the referee, forcing them to leave the pitch.

The referee has the authority to book or send off any member of the squad from the moment they enter the field for pre-match inspection to when they leave the pitch after the final whistle ends the game.

The offending squad member has their details (name and/or kit number) recorded by the referee in a small notebook that the referee keeps on them throughout the game. This is why receiving a yellow (first warning) is known as a booking.

A player who has been booked can continue playing in the match; however, if they receive a second yellow they will be sent off when receiving a red card.

Yellow card offences can include anything that the referee deems as an infringement of the laws of the game, dissent by word or action or delaying the restart of play.

As a yellow card serves as a warning, the referee can choose to brandish the caution to a member of the staff or playing squad before, during and after the game if he believes that it is the correct decision to make.

Being guilty of unsporting behaviour and showing dissent are official offences for a yellow card if the officials believe the incident is deserving of one, whereas more obvious offences such as infringing the laws of the game through fouls on opponents also warrant a warning from the officials.

A red card can be given by the referee if the individual being sent off has delayed the restart of play, shown dissent towards the match official, deliberately ignored the referee’s instructions, obstructed the movement of a player, or kicked the ball away when play has been stopped.

As an important factor in many games, a red card is often reserved for the most serious incidents with the referee’s judgment of physical fouls and challenges needing to be as accurate as possible.

The introduction of VAR (Video Assistant Referee) has allowed officials to have help in reviewing potential red card offences during a match however it still ends with the referee’s final judgment and decision for the committed foul.

Only a player, substitute, substituted player, or team official may be shown the red card.

What Can Get You Sent Off in Football

Any player, substitute, or member of staff can be sent off if they commit any of the seven offences set by the Football Association.

• Spitting at an opponent or any other person.

• Denying the opposing team a goal or an obvious goalscoring opportunity by deliberately handling the ball (this does not apply to a goalkeeper within his own penalty area).

• Denying an obvious goalscoring opportunity to an opponent moving towards the player’s goal by an offence punishable by a free kick or a penalty kick.

• Receiving a second caution in the same match.

Any of these offences will earn the individual a red card, signifying that they must leave the vicinity of the field of play and the technical area.

The differences between a yellow and red card challenge can be differentiated by the type of offence committed by a player, the amount of times an offence is committed, and whether the offence was deemed deliberate by the match officials.

Players can receive a red card if they slide tackle or lunge with their studs showing, strike their opponent with a body part in a violent manner, deny a goal-scoring opportunity through a foul, or by challenging in a dangerous way that could injure their opponent.

Players can receive a yellow card for challenges deemed less violent and more controlled by the fouling player. Handball is also a yellow card offence unless the player is preventing a goal-scoring opportunity or the last defender, in which case, the player is punished with a red card.