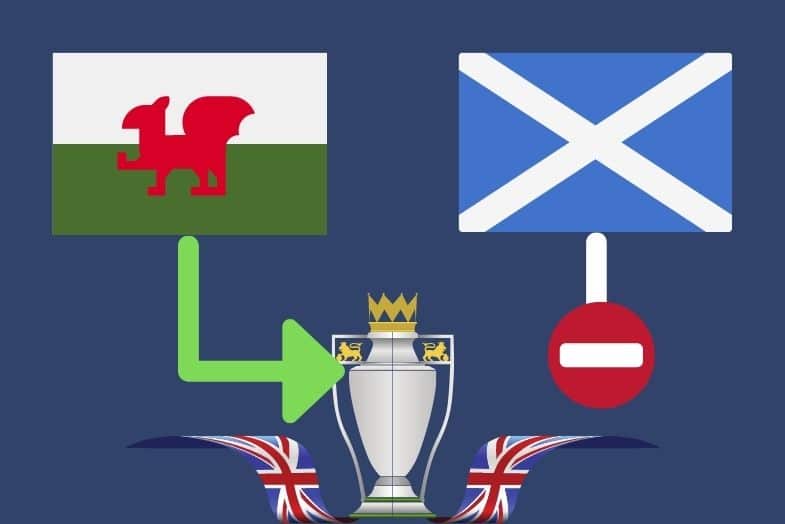 The idea of football clubs from one country playing in another country’s football league set-up may seem bizarre, but it is not as rare as you might think.

Perhaps the most high-profile example of this sporting anomaly occurs in England, where clubs from Wales have even played in the country’s top flight – the Premier League.

So how have clubs from another country managed, or been allowed, to achieve this feat?

And why are clubs from England’s other footballing neighbour – Scotland – not allowed to follow suit and participate in the English football leagues?

Can Welsh Teams Play in the Premier League?

Yes – the Welsh teams that compete in English football can earn promotion through the league system and ultimately play in the Premier League.

After winning the League Cup in 2013, Swansea became the first Welsh club to earn the right to represent England in European competition, while in 1927 Cardiff became the first and only non-English side to win the FA Cup.

How Many Welsh Teams Play in English Football?

These Welsh teams were permitted to join the English league system because when they were formed there was no Welsh football league, leaving England as their only viable option.

Although a Welsh Premier League was eventually formed in 1992, the five Welsh clubs predictably opted to remain part of the English football structure.

Welsh Teams That Play in England

Can a Scottish Team Play in England?

All Scottish teams are members of the Scottish Professional Football League (SPFL) and therefore are not permitted to compete in English football as the rules stand at the moment.

There has been talk over the years about the possibility of Rangers or Celtic joining the English Premier League.

However, given both the current rules and the previous lukewarm response of English clubs to the idea, it would appear that neither half of the so-called Old Firm will be leaving the Scottish Premiership any time soon.

Ironically, two clubs geographically based in England actually play their football in the Scottish system.

Both clubs are based in Berwick-upon-Tweed, which is a few miles over the border from Scotland in the very north of England.

Has a Scottish Team Ever Played in England?

Gretna is the only Scottish team to have joined and played in the English league system, which it did until being elected to the Scottish Football League in 2002.

The club is based in its namesake town in Dumfries and Galloway, close to the border with England, and despite originally playing in the Scottish junior leagues it moved to the Carlisle and District League in 1947.

From there, the club was eventually promoted to the Northern Premier League and participated in the FA Cup several times prior to 2002.

There are also historical examples of Scottish clubs participating in the early years of the English FA Cup, with Queen’s Park, the original dominant force in Scottish football, reaching the final in 1884 and 1885, beaten on both occasions by Blackburn Rovers.