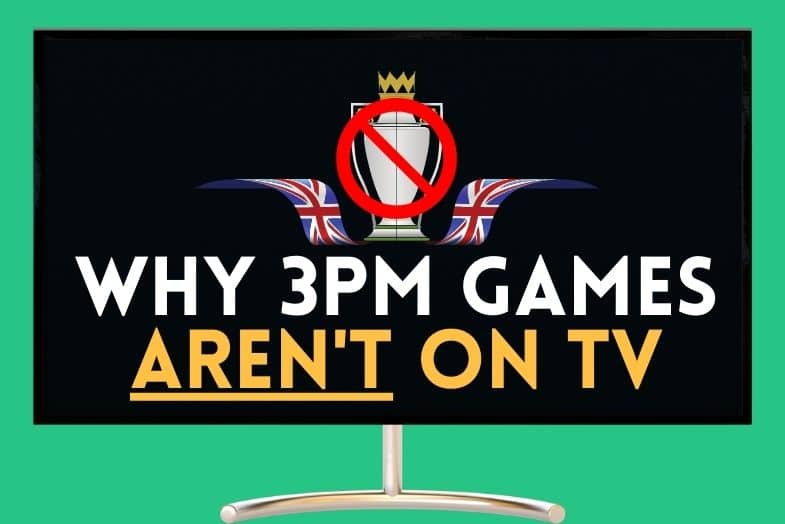 The Saturday 3pm kick-off time is enshrined in English football history, dating back to a bygone time when almost every match played across the country got underway at that time.

Now of course kick-offs in the Premier League are staggered in terms of times and the days on which the games are played.

Money talks in modern football, and matches are regularly rescheduled from the traditional 3pm Saturday kick-off to suit broadcasters’ needs – after all, they pay the big bucks to secure the rights to show live matches.

Television deals have played a huge part in the Premier League becoming the richest and arguably most popular football league in the world.

So, given this popularity, why can’t fans in England watch live matches at 3pm on a Saturday from the comfort of their own homes?

Are All Premier League Games Shown on TV?

There are ten matches played during each of the 38 Premier League game weeks – making up the total of 380 – and it is common for five or six of those to be available live to viewers at home.

During the latest round of negotiations between the Premier League and broadcasters, Sky bought the rights to show 128 live matches each season until 2025, BT Sports picked up 52 matches and Amazon got 20, all for a staggering combined cost of £4.7 billion.

So plenty of choice for viewers and subscribers to these channels and services, but 180 matches remain only available to those who actually go to the stadium to watch in person.

Why Are So Many Premier League Games Not Televised?

Each season, 180 Premier League games are not televised, essentially because these kick off at the traditional time of 3pm on a Saturday and it is illegal to show games live at this time in the UK.

The Premier League’s current television deal sees 200 matches shown live on Sky, BT Sports or Amazon, but the remainder are not sold to TV companies, which is also seen as a way to ensure good or capacity attendances at these games.

Why Are 3pm Premier League Games Not on TV?

Premier League games that kick off at 3pm on a Saturday are not on TV because of a British law that dates back 60 years that states no live matches can be shown between 2.45pm and 5.15pm on a Saturday – known as the Saturday 3pm blackout rule.

The blackout idea was put forward by the-then Burnley chairman Bob Lord, who lobbied support from his fellow Football League chairmen for the notion that allowing televised matches on a Saturday afternoon would negatively impact attendances, and thus reduce clubs’ income.

The rule does not only cover English Premier League games being broadcast in this timeslot, with the thinking being that even broadcasting big matches played on a Saturday in other countries could deter fans from going to matches.

Recently, Spain’s El Clasico between Barcelona and Real Madrid has fallen foul of the blackout, with British viewers missing 15 minutes of action several times due to its 5pm Saturday UK kick-off time.

The Saturday 3pm blackout rule states that no live games can be shown on British television between 2.45pm and 5.15pm on a Saturday; it has been part of UK law since the 1960s.

However, the law only applies in the UK, and it is common for 3pm games on a Saturday to be shown in many other countries.

For instance, broadcasters NBC and Peacock between them show every Premier League match live in America, whatever the kick-off time or the day the game is played.

Given the evolution of football since the 1960s, many groups are now calling for the 3pm blackout rule to be removed.

Match tickets are far more expensive nowadays, and many fans argue that it’s unfair there is no reasonable alternative for them to watch the game when most games are on TV anyway.

Clubs also have more fans spread across the country these days, and not just the thousands of local fans who would have attended matches every week decades ago.

And the elephant in the room is that Saturday 3pm matches are available to watch live on illegal streaming services in the UK. Technically, the Premier League could agree to show these matches and ensure more control over their “product” and earn more money.

No – it is illegal for pubs to show live matches played at 3pm on a Saturday. They can be taken to court by the Premier League and fined if they are found to be showing games live via an illegal source or stream.

Have 3pm Premier League Games Ever Been on TV?

Saturday 3pm Premier League games were shown live on TV during the Covid pandemic when no fans were permitted to attend the matches. This is the only time that the traditional Saturday 3pm blackout rule has been breached given the exceptional circumstances.

Given that only England, Scotland and Montenegro still enforce the Saturday 3pm blackout in Europe, and with broadcasters demanding more and more kick-off slots for live matches, it seems likely that the blackout rules will change sooner rather than later.

Figures of authority within the game have also admitted to being open to the change, including English Football League Chairman Rick Parry.

Speaking in 2021, Parry said: “I don’t see (an end to the blackout) as being essential. Having said that, I don’t necessarily rule it out.

“We are almost unique in Europe now in having a blackout period. I’m not presuming that it goes, but equally, if we’re looking at streaming, at new technologies and new broadcasters, we will probably have to be open-minded in terms of scheduling.”

So when the next broadcast rights negotiations begin in 2024, there may be scope for the decades-old Saturday 3pm blackout to finally end.