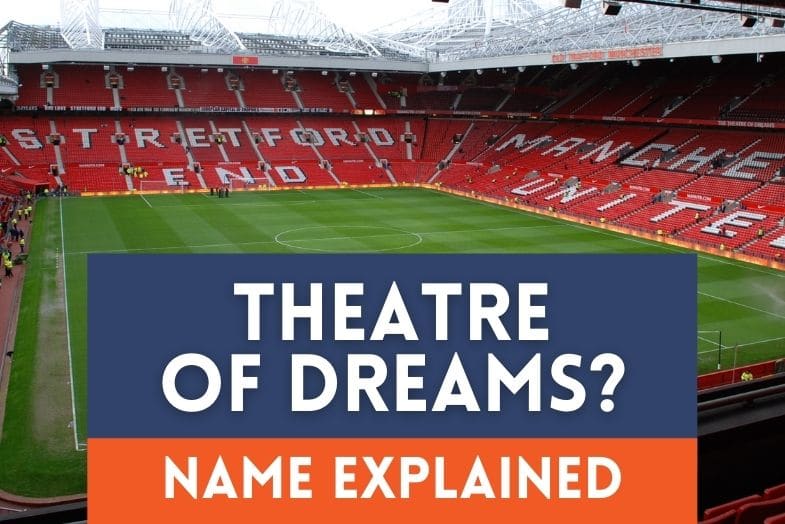 Manchester United is one of the largest football clubs in the world. Success for Manchester United has been enjoyed both on the field and through the commercial revenue it rakes in. That level of sustained success has permanently put Manchester United on the map, so it’s natural for football fans to want to find out more about the team.

One question many fans ask is why Manchester United’s home ground, Old Trafford, is also called ‘The Theatre of Dreams’. Let’s take a look at how the iconic stadium developed its famous nickname.

Why is Old Trafford Called the ‘Theatre of Dreams’?

The name ‘Theatre of Dreams’ comes from one of Manchester United’s icons, Sir Bobby Charlton. The legendary United player coined the phrase, “This is Manchester United football club, this is the theatre of dreams.” This phrase was published in John Riley’s 1987 book, titled ‘Soccer’ and it stuck.

Since that book was published, the term ‘Theatre of Dreams’ has been associated with Manchester United’s home ground. With Sir Alex Ferguson at the helm during the team’s peak, fans’ dreams came true as they saw their team conquer all before them. The fans played a crucial role in their team’s success thanks to the sheer numbers; Old Trafford has been the largest Premier League stadium for decades.

When Did Manchester United Move to Old Trafford?

Moving to Old Trafford in 1910 came during a spell of success for the fledgling Manchester United team. The team managed to win a First Division title in its inaugural season at Old Trafford, ushering the new ground in with championship gold. However, after the 1910-1911 season Manchester United wouldn’t taste league success again until the 1950s and the Busby Babes.

Before Manchester United moved to its iconic ground, there were a few other stops along the way. Life for the team that became the Red Devils started in 1878 at North Road. The ground was shared with a cricket club and when their seasons increasingly overlapped it was time for the football team to move on.

Manchester United moved into Bank Street in 1893, with an improved capacity of 50,000. The team then moved to Old Trafford in 1910 after the then-owner John Henry Davies didn’t think it could be expanded any further.