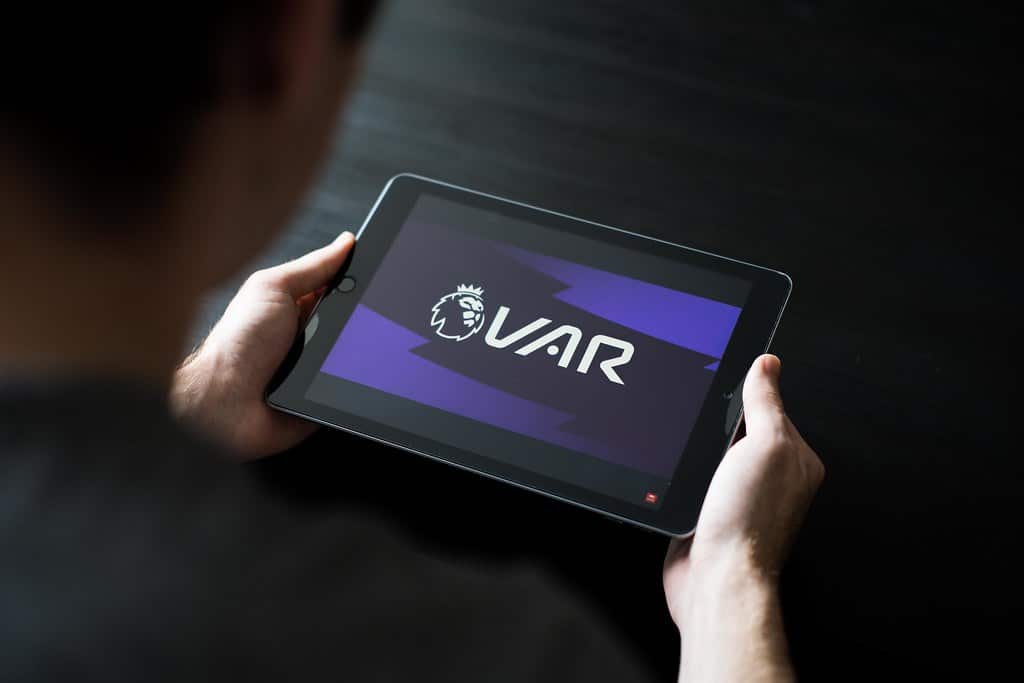 It wasn’t meant to be like this, of course. When VAR started, it was supposed to be football’s great cleanser, the ironing-out of grey areas, the full stop to endless, tedious conversations. Yet instead, we find ourselves discussing whether players’ toes were offside while watching arbitrary wonky lines be drawn on our screens.

Let’s take a look at how VAR works in football and in other sports, do a little ‘VAR: For and Against’ table, and suggest what the future holds for the technology.

What Does VAR Stand For?

Which seems pretty self-explanatory: the referee on the pitch makes the initial decision and then, if need be, the Video Assistant Referee can assist in double-checking if he or she made the correct ruling.

When Was VAR Introduced?

Why VAR Was Introduced

VAR works on the theory of ‘minimal interference, maximum benefit.’ Of course, whether you think it transpires in this fashion is for you to decide for yourself.

But it was introduced as a way to correct errors that are ‘clear and obvious,’ as well as highlighting ‘serious missed incidents.’

VAR involves three people who, together, review contentious decisions made by the on-pitch referee by watching video replays.

Where are VAR Decisions Made?

In a special ‘VAR Hub’ where all games are watched – they’re not also made from inside the stadium.

In England, for example the Hub is in Stockley Park in West London, while in Spain, this is the Royal Spanish Football Federation’s Ciudad del Fútbol headquarters in Las Rozas, Madrid.

Italy recently followed suit having previously used VAR booths either in or just outside the stadium, but have had a centralised Hub since the start of 2020-21 at the Coverciano training ground, the base for the Italian national team.

Who are VAR Referees?

There are typically three of them – a VAR, an assistant VAR, and a Replay Operator. Certainly, the man in control of VAR usually also works as an on-pitch referee in other games.

In the Premier League, VAR has access to all pitch-facing cameras, with some offering slow-motion replays, too.

There are also further cameras specifically for checking offsides with, as we all well know by now, the ability to project computer-generated lines on to the pitch to help make a decision.

If play continues while VAR checks an incident, the assistant VAR will monitor the match for any further events.

Meanwhile, if the ground has a big screen, it will inform the supporters that VAR is checking, as well as what it is checking for. If not, the stadium announcer will tell fans this information via the PA system.

When VAR Can Be Used

There are four main instances in which VAR can be called upon:

Either the referee requests a review after making a decision, or the VAR team recommend one. In the even of the latter, if VAR rules that a clear error has been made, he or she can then inform the on-pitch referee through their earpiece.

The referee can then do one of the following:

How VAR is Ruining Football

For starters, it’s worth saying that, teething problems or not, England hasn’t been the only country with VAR sceptics.

In March 2018, several hundred Lazio fans protested outside the Italian Football Federation’s Rome headquarters, for example, after they felt a number of mistakes by VAR had cost them that season.

Meanwhile, when it first arrived in Germany in 2017, there were complaints about the time it took to reach decisions and the subsequent confusion in stadiums – initially, nothing was shown on the stadium screens, so fans did not know there was even a VAR check in place.

Early issues in Spain surrounding the checking of the smallest details and, again, the time it took to do so – it became commonplace for games to have seven or eight minutes of injury time as a result.

France also became littered with bad press for VAR in 2018, not least because of the fact that a VAR check for a goal drained the emotion out of the event, to the extent that fans became unsure if it was really worth celebrating immediately after their team scored.

These, in a nutshell, encapsulate the pitfalls of VAR so far. They may correct themselves over time, but the in-game lulls while it checks what at times seem inconsequential incidents, the lack of clarity, and the sapping of joy from scoring feel its greatest hurdles thus far.

In England, of course, there have also been issues of the tightest of offsides – namely Sheffield United’s John Lundstram’s big toe or Liverpool’s Roberto Firmino’s armpit – as well as harsh handballs and pretty much all of the above snags, too.

Fulham manager Scott Parker had it right after watching his team be denied an equaliser against Tottenham in March 2021 because a Spurs player kicked the ball against Cottagers midfielder Mario Lemina’s hand in the build-up. He said:

“My stance on VAR is not going to change. We are looking for perfection, and I am not just talking about football but about the world we live in.

“We are trying to create a sterile, perfect-scenario game which I think ultimately in the end is going to destroy it. The game is about raw emotion.

“From what has gone from just trying to get the real big decisions right has slowly turned into practically every decision in the game, trying to iron out any imperfection we have.”

This, really, sums up why there is such antipathy to VAR – it was introduced to deal with, in what feels like a tired cliché now, ‘clear and obvious’ errors, but has instead nit-picked every minor issue to such lengths that the game is worse for it.

Perhaps, then, the ruling is the problem. The day after Fulham were denied that goal for an Lemina’s totally accidental handling, IFAB announced an amendment to football’s handball rule from July 1, 2021. Had it been in place that day at Craven Cottage, Fulham’s goal would have stood.

It is a lack of clarity which is also proving its downfall – rather than eradicating grey areas, it seems to at times multiply them.

And it’s worth saying that, by and large, those who oppose VAR in football or sport are far from Luddites. The introduction of goal-line technology, for instance, was almost universally approved because of how it reaches inarguable decisions in a split-second.

Plus, other sports using similar technology, like tennis and rugby, have no such debate about controversial decisions because there’s no real ‘interpretation’ of the rules. It’s far more black and white, and all the better for it.

Why VAR is Good

The obvious positive of VAR is that it comes to the right decision – not always, admittedly, but more often that not. Even if the process by which the correct ruling is reached is painstaking and time-consuming.

Take the 2018 World Cup group stages. The games average seven checked incidents each, while 14 on-field reviews were made by referees and three by the VAR team on factual decisions. Games were paused for minutes at a time; spectators were left none the wise. Yet the success rate of decisions stood at 99.3 per cent. For some, then, the end will justify the means.

What feels likelier is that VAR will be fine-tuned and perfected over time; it’s easy to forget, given how prevalent it is across football, that the technology is still really in its nascent stages.

Currently, it feels as if the technology itself is fine and worth perservering with, but its implementation is the problem.

Will VAR Be Scrapped? The Future of VAR in Football

No, it won’t be scrapped, but it’s interesting that, in December 2020, one of its most prominent champions in Infantino pointed out that it’s not always necessary.

Per Goal, he said:

“VAR is not an obligation, it’s there to help. Those who don’t want to use it, they are not obliged to use it.”

“We have to remember VAR was introduced for the first time two years ago, not 20 years ago. VAR is helping football, it’s certainly not damaging football.

“We must not make a confusion between VAR and maybe sometimes wrong decisions which are taken because of the wrong way in which VAR is used, maybe in some places because of the lack of experience of those who are using VAR.

“Let’s not forget this really is a landmark change for a referee who didn’t grow up with VAR. We have to take the pulse of what is happening out there, to take the criticism and analyse them.

“It helped referees in the World Cup, it helps referees in many competitions and players and coaches agree.”

It’s hard to disagree with Infantino – too much time, money and effort has been invested into the introduction of VAR that it feels futile dispensing with it altogether at what is still an early stage in its development.

It needs modifying – a time limit on reaching decisions wouldn’t go amiss, while more leeway on when the on-pitch referee can use his own pitchside monitor might help – but we shouldn’t kid ourselves into thinking we can overthrow VAR. Evidently, it’s here to stay,

One thought on “Why is VAR Not Working in Football?”