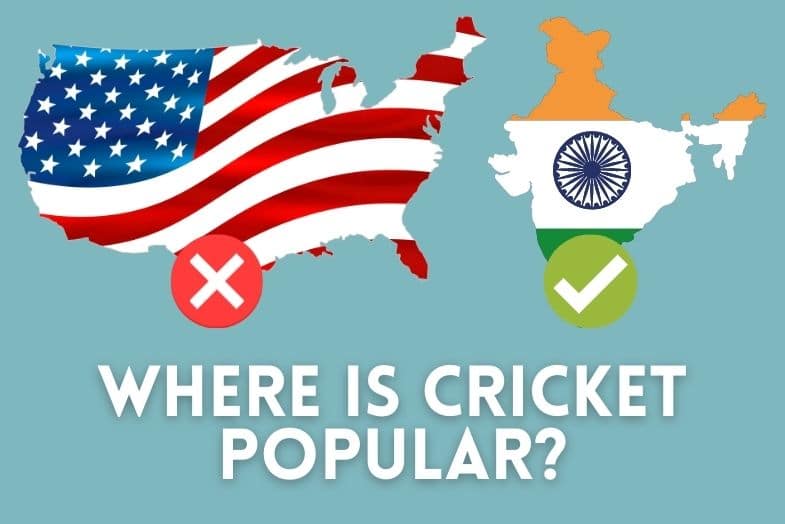 Although cricket isn’t exactly everyone’s cup of tea, one might be surprised to learn that it actually ranks as the second most popular sport worldwide, serving as a runner-up for football.

In fact, cricket’s popularity is a paradox on its own. While the sport is commonly an afterthought and relatively non-existent in large areas of the world, it is religiously followed in some parts of the globe.

In fact, all aspects of daily life can take a backseat in some countries like India and Pakistan when a significant cricket match is taking place.

So in which countries is cricket popular? And why isn’t the sport popular worldwide?

Where is Cricket Popular?

Cricket is mostly popular in the former British colonies, and mostly in the Indian subcontinent, including India, Pakistan, Sri Lanka and Bangladesh. In these countries, it is considered as the uncontested most popular sport. The West Indies can also be added to the list.

Cricket is also extremely popular in Australia and New Zealand, even if it comes second in terms of popularity behind rugby.

Despite being the origin country of the sport, cricket ranks third in the United Kingdom (behind football and rugby), which is also the case in South Africa.

Cricket is also practiced by minorities in countries like the Netherlands, the Republic of Ireland, Zimbabwe and Nepal.

Finally, the sport’s popularity is growing in cosmopolitan metropolises such as Dubai and Hong Kong thanks to the presence of large groups of south Asian immigrants.

Why is Cricket Not Popular Worldwide?

The fact that cricket hasn’t reached worldwide popularity can be attributed to several reasons, including the length of the match (which can last for five days). Moreover, a first-time viewer would struggle to understand the rules which can be confusing compared to more straightforward sports like football and basketball.

Additionally, cricket can be perceived as a rich man’s sport played by overpaid athletes, as its practice requires expensive equipment, which is another reason why youngsters and parents might resort to more affordable sports.

It’s also worth noting that individuals who adopt sport as a means to maintain fitness mostly turn to more physically-demanding games like football, tennis, rugby and others.

Why is Cricket Only Played in Some Countries?

Cricket was first founded and developed on English shores, before being exported by the British Empire to its vassal states, the likes of India, Pakistan, South Africa and Australia. Therefore, the sport remains vastly popular in the former British colonies but barely existing in the rest of the world.

While the Brits had introduced the sport to the United States in the 19th century, the Americans eventually created their own version of the bat and ball sport which became known as baseball. The fact that the USA was left out from the ICC in 1909 (at the time known as the Imperial Cricket Conference) didn’t help the sport’s case in the New World.

The USA was eventually admitted as an associate member in 1965, but by that time, baseball had conclusively won the duel against cricket on American shores.