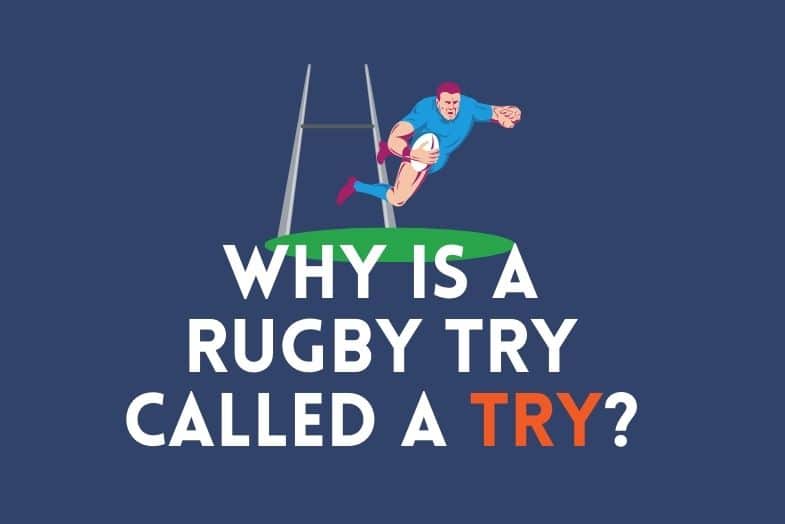 Rugby is one of the oldest sports in the world, so you would think its rules and terms are well known. However, that’s not always the case and sometimes they need explaining. Like the try, for instance, sure it means a score in rugby but where did the term come from?

Many other sports call a score something like a goal, basket, point or touchdown. These all make sense in the context of the sport.

Rugby, on the other hand, isn’t so obvious. Let’s take a closer look at why a rugby try is called a ‘try’ and what the rugby scoring rules are.

Why is Rugby Try Called a ‘Try’?

The term try in rugby comes from the sport’s original scoring system. After grounding the ball beyond the try line, the attacking team had a ‘try’ at kicking the ball into the goal. Years ago, rugby games were decided by goals but, for entertainment’s sake, multiple scoring methods were introduced.

The first international rugby union match was between Scotland and England in 1871. Scotland won the game 1-0, despite scoring two modern-day tries and a conversion to England’s single try.

These days, rugby players can score from tries, dropkicks, conversions or penalty kicks. Games are much higher scoring affairs than they used to be which helps boost the sport’s popularity.

What Does Scoring a Try Mean in Rugby?

Scoring a try in rugby involves taking the ball beyond the try line and grounding it for a score. Depending on the rugby code being played, tries can be worth four (league) or five (union) points. In either version of the game, a try is the main way of scoring points.

Rugby has loosely been around since the Middle Ages but it’s largely recognised that the modern version was created at Rugby School, Warwickshire in the 1820s. Although the rules might have changed drastically since then, the ball is still oval-shaped and the sport is stronger than ever.

Rugby is played all over the world, with professional leagues on all six populated continents. Its universal appeal sees players doing battle on the field in the name of scoring tries and kicking points.

What Happens When You Score a Try?

The scoring team is immediately awarded points for a successful grounding of the rugby ball (a try). Then, the team is given another chance to add points to the scoreboard with a conversion effort. Conversions are worth two points regardless of whether the game is rugby league or union.

Once the conversion attempt has been made, the team that conceded the score then kicks the ball back to restart the game. Mostly this kick returns possession to their opposition. This might seem unfair but it’s in both team’s interests to get themselves on the scoreboard and a scoring streak.

Besides the scoring systems, there are plenty of differences between rugby union and league, like these. Rugby union was formed first but rugby league was the first to turn professional. While rugby union remained amateur, rugby league players were earning money for playing the sport.