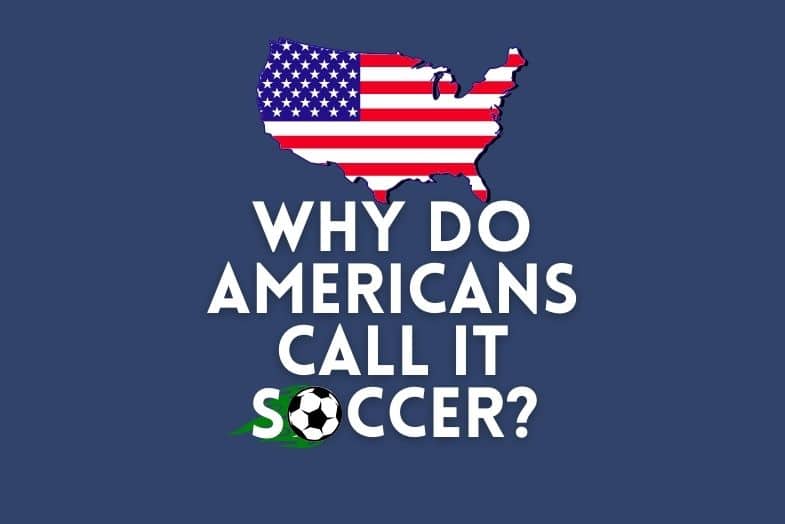 As one of the oldest team sports in the world, football has touched nearly every corner of the globe. There is a football association for every country, county and hamlet just about everywhere.

In different languages and countries, the game goes by many names: Football, ​​Fútbol, Fußball, sakkā (サッカー), soccer and much more.

But Americans speak English. So why do they commonly refer to football as “soccer” unlike their cousins across the pond? And did you ever wonder where the term “soccer” even comes from?

Is it just another American invention? Or are the Americans just confused about football in general?

Don’t worry. In this article we will explain everything you ever wanted to know about soccer.

Why is Soccer Called ‘Soccer’ in the First Place?

Football was officially born when its rules were created in England in 1863. It was then nicknamed association football to distinguish it from rugby football. A few decades later, English private schools and universities began using terms like “socker“ as an abbreviation of “association.”

The legend of the term “soccer” is that an Oxford University student, Charles Wreford-Brown, coined the term. He is also alleged to have coined shortened terms like “brekkers” for breakfast and “rugger” for rugby.

Football has been around in some form since medieval times. The first written evidence dates back to 1170 from a visitor to London. Association football and rugby football can both be traced back to this primordial game. But which came first: rugby or football?

The United States is the largest nation that calls football “soccer.” Their northern neighbours in Canada also prefer the term “soccer”. Other English speaking countries that commonly call football “soccer” are Australia and New Zealand.

Canadians, like their North American brethren, use the word “soccer” to differentiate the sport from what they call gridiron or Canadian football. Likewise, the Aussies follow suit to distinguish the game from Aussie rules football.

Other countries that use the term soccer in their common language include South Africa (Afrikaans), Japan, and Ireland.

Other countries have common unrelated nicknames for association football. Examples of these would be “calcio” in Italy or “nogomet” in Croatia.

Why Do Americans Call Football ‘Soccer’?

In the United States, association football is called “soccer” to distinguish it from the much more popular sport of American football. In America, the word football is only used to refer to that sport. However, the term “soccer” is an import from the British.

According to New York Times article from 1911, the sport appears to be have been referred to as “soccer”, “association football”, and “soccer football” interchangeably in the U.S.

The top professional football division in America is Major League Soccer (MLS). The league was founded in 1993 as part of a successful bid for the 1994 FIFA World Cup. The league’s first match took place in 1996.

The MLS has had its financial struggles but continues to grow well beyond its inaugural season with only ten teams. Known for attracting ageing star footballers, many wonder if the MLS is a retirement league.

Many could be forgiven for watching a game of American football and being confused that it isn’t called ‘handball’ or ‘pigskin ball’. But American football is the nation’s own evolution and combination of two popular sports from Europe: rugby and football.

The first game of American football took place between two universities, Rutgers and Princeton, on November 6, 1869. The game played on that day was based on the London Football Association’s rules in 1863, used a soccer ball ended with a score of 6-4 to Rutgers.

It was the father of gridiron football, Walter Camp, who would create the first rules to create a new and truly American sport. These rule changes included a line of scrimmage where the team in possession would start uncontested and having a “snap-back” from the centre to start live play.

Why is Soccer Called ‘Football in England’?

In 1863, the English FA codified rules of “association football” to differentiate the sport from rugby football. Short for “association”, “soccer” was used in Britain from the late 19th-century until losing popularity due to a backlash against its use in America and by the British upper class.

For nearly a century, the terms soccer or football was used commonly in Britain. Like many things in the United Kingdom, the use of terms came down to class. The upper class preferred the term soccer while the middle and working classes preferred the word football.

Since the 1960s, with the waning influence of the British upper class, football has dominantly supplanted soccer.

Research in 2014 by Stefan Szymanski, a professor of sports economics at the University of Michigan, found the origins of the term to be from mid-19th century Britain. Symanksi’s research found that “soccer“ was an “innocuous alternative to the word football“ in Britain.

That is until the 1980s where Brits fought against the term due to the “penetration of the game into American culture“.

America has always been a melting pot and confluence of cultures since before its founding. It is a workshop for the innovation and evolution of all things including sports. American football is a prime example of this. But America also has a growing love for the beautiful game!

There is no love for the term soccer in Britain. But on American soil, soccer is there to stay!