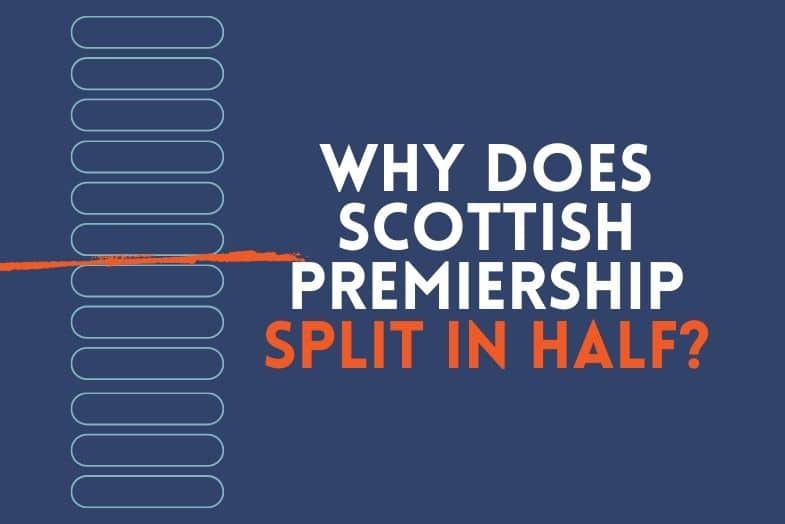 The Scottish Premiership – the latest incarnation of Scotland’s top flight – is one of the few European leagues to adopt a split format, where the league splits into two “mini leagues” towards the end of the season.

The split system used in Scotland has been much-debated and often berated, but it is far simpler than the formats found in the likes of Belgium, where post-split the teams start with only half the points earned in the regular season, or Denmark, which has single-match play-offs to decide on European competition qualification.

But why does Scotland’s top league have a split at all?

Why Does the Scottish Premiership Only Have 12 Teams?

The Scottish Premiership has 12 teams for two main reasons – first, a lack of general strength in depth in the Scottish lower leagues and second, because there has been a long-standing lack of consensus regarding how many teams should be in the league.

Indeed, in its previous incarnation as the Scottish Premier League (SPL), the top flight only had ten teams until the number was expanded to 12 in 2000.

Although there are “big” clubs currently playing in the Scottish Championship and lower – clubs such as Kilmarnock, Hamilton and Partick Thistle, who have all played in the Premiership recently – Scottish clubs have regularly failed to agree on league reconstruction that would see the top flight expanded.

As stated above, the Premiership, and the SPL before it, has had 12 teams since 2000, making for the longest period without change in the Scottish football league system, and it doesn’t appear that any change is imminent.

Over the past 21 years (and more), the league title has only been won by either Celtic or Rangers, with the latter having spent several seasons in the lower leagues following liquidation in 2012.

The last club from outside Glasgow to win the Scottish league title was Aberdeen back in 1985.

Why Does SPL split in Half?

The Scottish Premiership splits in half after 33 matches to avoid the need for a prolonged 44-match season for the top-flight clubs, and in theory to produce fewer meaningless end-of-season matches.

After the 12 teams play each other three times – so 33 matches each – the league splits into a top six and bottom six, with each team playing the other five in its half once, making for 38 matches in total.

Technically, the top six is referred to as the championship half, and the final five matches determine who are crowned champions and who qualifies for European competition the following season.

The bottom six is the relegation half, and does what it says on the tin – it determines who finishes bottom of the league and is relegated to the Scottish Championship, and who finishes 11th and faces a play-off with a Championship club to stay in the top flight.

Ironically, a team finishing in the bottom six can reach a higher points total than a club in the top half, depending on how the final five games go, but cannot move up above 7th position in the final league standings.

Celtic’s fans have enjoyed the bragging rights as their team has dominated in terms of Premiership titles, winning seven in total since the league was reformed in 2013.

When and Why did the SPL Split Start?

The Scottish Premiership split began in the 2000/2001 season as a means of preventing the top-flight clubs playing 44 league matches, a number that was considered excessive by most of the clubs involved.

The league was known as the SPL – or Scottish Premier League – at that time, which was formed in 1997 in an attempt by the top clubs to retain more of the income generated in the game.

This was prompted by envious glances across the border, where the top English clubs had already established their own Premier League in 1992 and were reaping the rewards, particularly in the form of TV deals.

The original SPL had ten teams that played each other four times a season for a total of 36 matches. The number of clubs was increased to 12 in 2000 to appease lower-league teams who saw the top flight as a “closed shop”.

Thus, the split was introduced as a means of avoiding a 44-game season, with each club playing 38 instead.