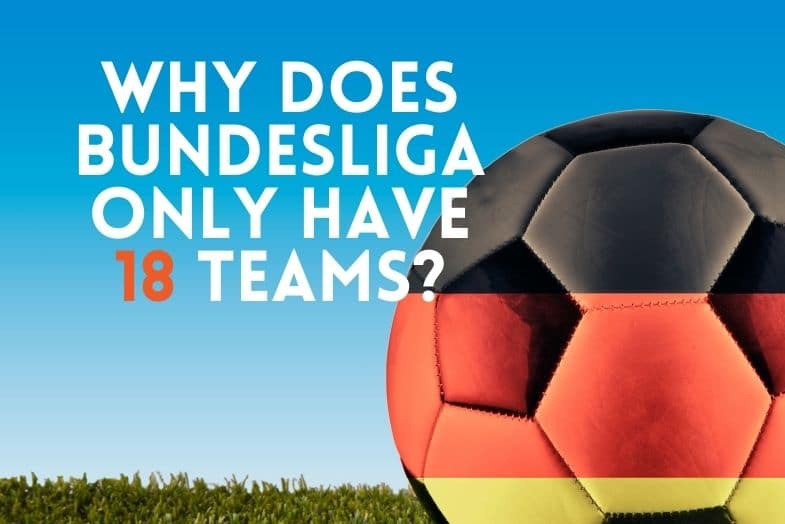 While the rest of Europe’s Top Five league all have 20 clubs competing in their first tiers, the Germans beat their own drum, with the Bundesliga famously containing just 18 teams.

Unusual? Unfashionable? Less attractive? Perhaps it is. Nevertheless, this notion has its own logic, and arguably a good one.

So why does the Bundesliga only have 18 teams? And Could it be increased to 20 teams anytime soon? Why does German football have an extended winter break? What are the pros and cons of the German formula? And Could the English Premier League adopt it in the future?

Why Does Bundesliga Have 18 Teams?

For its inaugural season in 1963/64, the Bundesliga had just 16 teams. But two years later, the number was lifted to 18 out of pure coincidence.

Hertha Berlin were demoted on account of bribery, but the federation decided to replace them by offering a free promotion for another club from the west side of the capital. This turned out to be Tasmania Berlin who acted as the unofficial whipping boys for the rest of the league for a whole season before fading into the shadows.

However, promoting an amateur team to the top tier just because it represented Berlin would have been considered an unfair decision towards the two relegated sides who finished at the bottom of the Bundesliga table (Karlsruher and Schalke).

So in order to please everyone, these two clubs were allowed to stick around in the first division, taking the number of clubs in the league up to 18.

From then onwards, the number has remained unchanged , expect for the 1991/92 season when the league integrated teams from East Germany for the first time, thus featuring 20 clubs in total. But the following season, the 18-team format was restored.

Why Does Bundesliga Play 34 Games?

In the current 18-team format, each Bundesliga club has seventeen opponents that they must face twice (home and away) throughout the season, which explains why the league is composed of 34 rounds.

The English Premier League, the Italian Serie A, the Spanish Liga and the French Ligue 1 all have 38 rounds during the season as those leagues are each composed of 20 teams.

Thus, the Bundesliga possesses the shortest calendar amongst the Top 5 European leagues.

Why Does Bundesliga Have a Winter Break?

As explained above, the Bundesliga calendar has only 34 matchdays (four fewer than the other top European leagues), which means that the German league can afford to take a winter break in the middle of the season.

This system helps the players in recharging their batteries. It also allows them to spend the holiday season with their loved ones and spares them from playing during some of the coldest weeks of the season.

Whilst the winter break used to last for around six weeks (with no balls being kicked throughout January), it has been reduced to almost three weeks starting from 2020/21.

As ever, any format will have its supporters and detractors. On the plus side, the 18-team league provides more competitiveness to the league, as the the two extra clubs would be brought from lower tiers. Moreover, this format is essential for maintaining a winter break which ensures a healthier schedule for athletes.

On the negative side, having only 18 teams in the league limits the chance for up-and-coming sides to climb their way to the higher echelon.

Additionally, this system means that the bigger sides in Germany are more threatened with relegation compared to their counterparts in the other top European leagues who are provided with a bigger number of “cushions” who usually end up taking the fall by the end of the season.

On anther note, the lighter schedule, extended winter break and lesser number of clubs are sometimes used as arguments for some of the league’s critics who label it as a ‘Farmers’ League’.

Will the Bundesliga Be Increased to 20 Teams?

The idea of increasing the Bundesliga club to 20 is one that reappears every now and then, but it had never truly materialized in the past, and it’s unlikely to do so anytime soon.

In fact, some of the big teams in Germany are in favour of reducing the number of clubs to 16 instead of lifting it, as explained by ESPN.

Whilst some of the smaller sides would love to expand the league’s size, winning a vote, perhaps due to the 50+1 rule, that establishes a new regime remains a tough task to achieve.

Will the Premier League Be Reduced to 18 Teams?

The Premier League might be the most prestigious domestic league in football and surely has the biggest prize money, however, Manchester United and Liverpool tried to lead a revolt aimed to reduce the number of the participant teams from 20 to 18.

But as the Sun tells it, these two giants (alongside the rest of the Big Six) have realized that their attempts are due to fail, as the majority of the country is unwilling to destabilize a system that proved to be incredibly successful in terms of promoting English football throughout the globe while offering major financial rewards for the big and the small clubs alike.