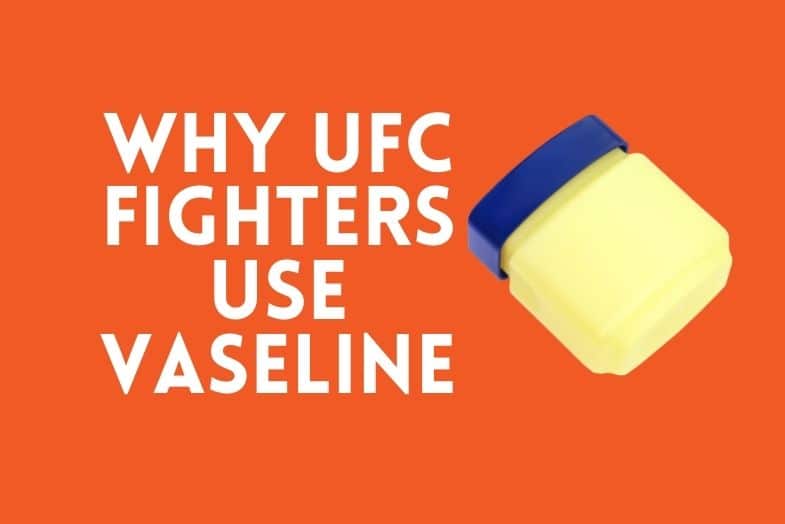 Once the walkouts are done and it’s time to get to business, fighters must stop and remove all unnecessary clothing and accessories but that’s not all. There are then a few final checks to be done by UFC officials to ensure fighters are complying with the rules.

Then, once the checks are complete, they get their faces rubbed with Vaseline. But why is this? Let’s take a closer look at the UFC’s Vaseline policy.

What Do UFC Fighters Put On Their Face?

Before a fight, a layer of Vaseline (petroleum jelly) is applied to a fighter’s face. This is directly applied to the areas of the face most likely to receive impact from striking. The Vaseline makes the skin more elastic and slippery, therefore reducing the likelihood of it tearing.

Unfortunately for fighters, biology dictates that the face is an area of the body that is vulnerable and prone to bleeding. With Vaseline applied to the face, strikes are more likely to roll off a fighter than to tear the skin. It’s important to note that fighters are not permitted to apply the Vaseline themselves and this can only be done by an official UFC cutman.

Due to the nature of MMA, there is a risk of heads colliding, which often results in at least one fighter getting cut. Reducing that risk by applying Vaseline helps keep fights going for longer and reduces the level of trauma and scarring to a combatant’s ‘moneymaker’.

Why Do UFC Fighters Have Vaseline Applied to Their Faces?

Fighters have Vaseline applied to their faces to reduce the risk of cuts. The petroleum jelly makes skin more slippery and elastic, reducing the chances of tearing. However, when cut, Vaseline is applied to the wound to pack it and slow the blood from streaming, allowing the fight to continue.

The practice of applying petroleum jelly to the face during a fight is inherited from boxing. If the skin is broken during the fight, it’s the job of the cutman to stem the bleeding between rounds. Or at the request of the referee in exceptional circumstances.

This is when you will see them press what looks like a miniature iron to the fighter’s face and generously apply more Vaseline to the cut or cuts. The metal is cooled to reduce the swelling between rounds as much as possible. However, no matter how much petroleum jelly is applied, some weight classes put the heavy hitters together, making cuts inevitable.

The UFC’s rules state that excessive use of grease is prohibited. Any cutman adding too much Vaseline to a fighter will see that grease removed by the referee. Previously, the UFC only allowed Vaseline to be applied before a fight but since 2018 it can be applied between rounds.

Why Do UFC Fighters Get Patted Down?

To ensure fighters are not smuggling a weapon into the ring, they are patted down. UFC fighters are also checked to ensure any jewellery or piercings have been removed before stepping into the Octagon. This patting down also checks whether the fighters are wearing the correct protective gear.

Fighters don’t have much in the way of protective gear, but male combatants must wear a cup in their shorts and female fighters wear a protective chest plate. Cutmen also do a final check of a fighter’s appearance.

This can include checking the length of their finger and toenails to reduce the risk of cuts or injuries to the eyes. A fighter’s hair must also be checked to ensure it doesn’t present a risk or interfere with their opponent’s ability to fight. For instance, an extra-long beard can make it impossible to know where a fighter’s chin is.