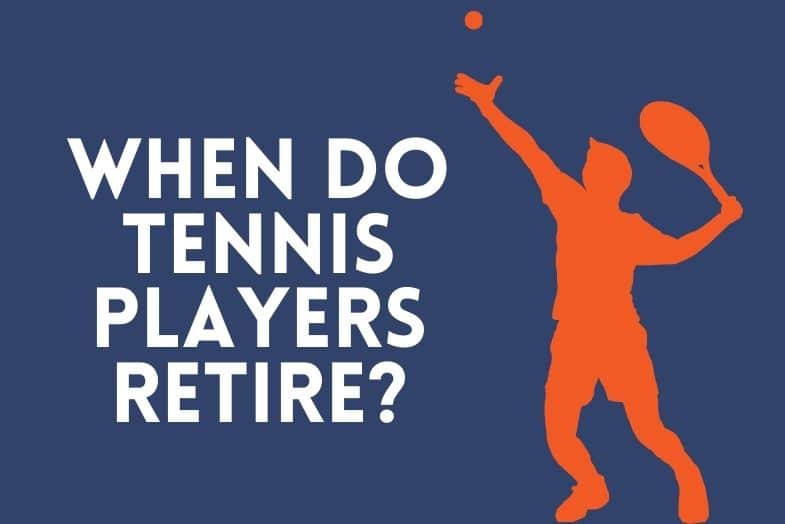 Since the 2010s, fans and observers alike have awaiting the emergence of a new generation of tennis stars that can take the torch from the golden trio of Roger Federer, Rafael Nadal and Novak Djokovic.

Although a host of younger players have been able to cement themselves on the big stage, none of them quite managed to overthrow the old guard who are still dominating the sport’s landscape, leaving us to wonder for how long will they be able to defy father-time.

So at which age do top tennis players usually retire? What are the reasons that prompt them to make the decision? And when do they hit their peak?

Let’s find out what the statistics say when it comes to the peak ages of the sport with the weird scoring.

Why Do Tennis Players Retire?

The reasons behind the retirement of tennis players can be split into two large categories: physical and financial.

When it comes to the physical aspect, some players are forced to retire at an early age due to injuries. On the other hand, others call it a day when their condition begins to decline with age.

As for the financial reasons, it should be noted that tennis is a costly sport. While the top players are backed by a number sponsors and earn large amounts of cash from prize money, the vast majority of professional players don’t enjoy such luxury.

Instead, these less renowned athletes struggle to break even and end up funding their own travels when on tour. So if a player fails to find a breakthrough and lift himself to the top level, he would naturally consider retirement, even at a young age.

As we all know, tennis is a physically-demanding sport, which could explain the relatively young age for peaking. However, there will always be exceptions.

For instance, a technical master like Roger Federer would naturally cope better with aging than a work-horse who heavily relies on speed and stamina, and the same goes for a colossal big-server like Ivo Karlovic.

When Do Top Tennis Players Retire?

However, it should be noted that the averages have significantly improved in the last decades, as they were calculated at 23.74 for men and 22.56 for women back in 1987.

Ken Rosewall remains the oldest tennis player to win a Grand Slam. He has been holding the record since 1972 when he clinched the Australian Open on home soil.

The legendary Aussie achieved this historic feat at the age of 37 years, one month and 24 days. Federer currently serves as his runner-up, winning the Australian open in 2018 at the age of 36.

In this paragraph, we’ll list some of the most famous players who still graced the tennis court beyond the age of 40 and the timespan they spent as active players.