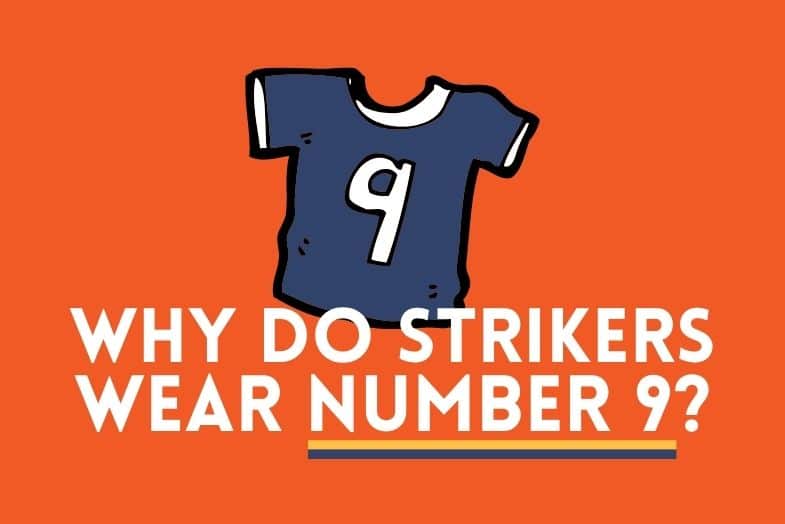 Modern football across the world now makes use of squad numbers, with some weird and wonderful numbers seen on the backs of players’ shirts.

However, when it comes to shirt numbers, one thing has remained pretty constant over the years, and that is the team’s main striker having the number 9 shirt.

So why is this the case, why is it important and who are some of the best number 9s to have played the game?

Why Are Strikers Number 9?

Strikers wear the number 9 shirt because traditionally it has been designated for a team’s most dangerous attacking threat – in other words, their best striker and main goal scorer.

Shirt numbers weren’t used in football until the 1920s, when clubs first started using shirts numbered 1–11 to identify the players.

While the goalkeeper took the Number 1 shirt, defenders were allocated the lower numbers and forward players took the higher numbers, with the centre forward or main striker traditionally given the Number 9.

Do Strikers Have to Wear Number 9?

Strikers don’t have to wear the number 9 shirt, and many (if not most) nowadays wear other shirt numbers that they largely choose themselves.

For example, two of the most prolific scorers in modern football have their own iconic shirt numbers, and neither wears the Number 9.

Cristiano Ronaldo (688 goals in 922 appearances) always wears the Number 7 shirt, and Lionel Messi (690 goals in 829 appearances) famously had the Number 10 shirt for Barcelona for many years.

However, whether either Ronaldo or Messi can be described as a real “Number 9” is debatable, as we will see.

Why is a Striker Called a “Number 9”?

A striker is called a “Number 9” because that is traditionally the shirt number that a club’s main goalscorer has worn since shirt numbers were introduced in the 1920s.

Nowadays, a player being described as a “Number 9” has connotations of them being a certain type of forward player, usually a bustling, tall centre forward who not only finds the net regularly but also gives opposition defenders a tough time physically.

A “False 9” is an innovation in football tactics where a team plays without a recognised striker; instead, one or more players (usually attacking or creative midfielders) fill in in the “striker” role at various stages of the match, and often drop deep to take in the ball.

The lack of a main “Number 9” to occupy the centre halves can often cause confusion among defenders, leaving gaps for the front players to exploit.

Although not a new tactic, it came to prominence across Europe in the 2000s when employed by the likes of Pep Guardiola at Barcelona and Luciano Spaletti at Roma, who respectively used Lionel Messi and Francesco Totti as their False 9s.