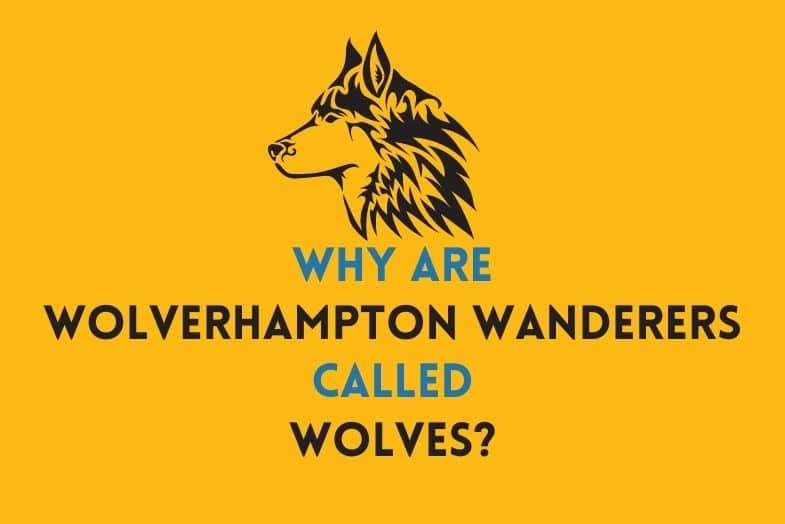 Have you ever wondered where a club nickname comes from? Many club names have their own unique origin stories. And this is also often the case when it comes to the nicknames of a football team.

But other times it is quite simple, the nickname comes from the formation of the club. And in the case of Wolves, it has to do with the merging of two clubs from completely different sports!

Why Are Wolverhampton Wanderers Called ‘Wolves’?

The term ‘Wolves’ is simply a shortened version of Wolverhampton. Since the 19th century, the city of Wolverhampton and its various clubs have been referred to as Wolves. There is no well-defined origin of the term other than it is a local nickname for the city.

Wolverhampton Wanderers FC has had the name ‘Wolves’ and an image of a wolf on programmes since at least the mid-1920s-1930s. In the 1960s, the club included a leaping wolf on the club badge. And since 1979, the badge has consisted of a “wolf head” design in gold and black.

Why Are Wolverhampton Called ‘Wanderers’?

The football club was founded in 1877 as St. Luke’s FC by two pupils of St. Luke’s Church School in Blakenhall. But in 1879 the club merged with a local cricket club called Blakenhall Wanderers. From August of 1879, the team was known as Wolverhampton Wanderers.

The ‘Wanderers’ name is as old as organised sports. The first club to ever win the FA Cub were called Wanderers FC after moving from London to Battersea Park. Examples of other clubs would be Bolton Wanderers, Wycombe Wanderers or the Montevideo Wanderers of Uruguay.

Who Are Wolves’ Rivals?

In 2008, a poll of 6,000 supporters across England, Wolves vs West Brom was ranked as the most heated rivalry in football. The history of the derby goes all the way back to January of 1883, where Albion won 4-2 in the Birmingham Senior Cup. The clubs would then meet two consecutive years in the FA Cup (‘86 and ‘87).

In the 1950s, both teams consistently challenged for the league title, with Wolves winning three times. In the 1953-54 season, both teams finished in the top 2.

Why Are Wolverhampton Wanderers Called ‘The Dingles’?

The Dingles are a fictional family depicted in the British soap opera Emmerdale since the mid-1990s. During this time “The Dingles” became a term for country folk. And Wolverhampton has been referred to as “The Dingles” by rival and local supporters of clubs in the West Midlands.

Clubs that call Wolves The Dingles are mainly West Bromwich Albion, Birmingham City, Aston Villa and Walsall. These are clubs that Wolverhampton have either historically competed with similar accolades or simply just have a rivalry with based on proximity.

Supporters of other football clubs may also use the term ‘The Dingles’ as a derogatory term to refer to their own rivals. These include clubs like Blackburn Rovers and West Ham United.

Sometimes the simplest answer is the right one. And sometimes things have always been the same as far back as our elders “can remember.” In the case of the ‘Wolves’ nickname, this couldn’t be more true. The city of Wolverhampton has been shortened to ‘Wolves’ since before the football league was formed.