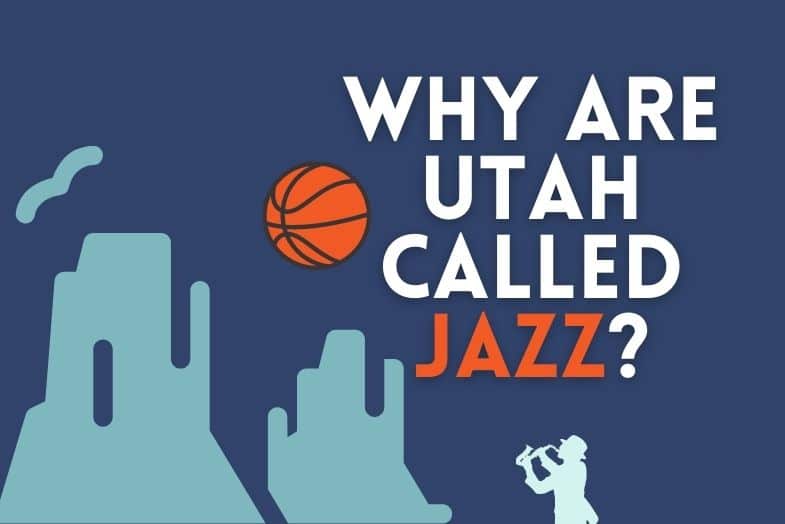 In many sports leagues, a club will be sold or moved by the ownership but keep the original team name.

Many sports teams take on nicknames that reflect on their unique history like that of Crystal Palace being called ‘The Eagles.’ But in most American sports leagues, there is not a tradition of fan given nicknames or common team suffixes like in English football.

The NBA is one of the biggest sports leagues in the world. But it is an association of franchises. Owners can sell or move clubs with the approval of the league. Many times this happens because the team isn’t financially viable due to a lack of local support or other factors.

The ‘Jazz’ name comes from New Orleans where the team was founded in 1974. The New Orleans Jazz was sold and moved to Utah in 1979 due to financial problems. The organization chose the name as a tribute to the city and its rich history in jazz music.

Dixieland jazz was started in New Orleans by Charles “Buddy” Bolden” and his contemporaries in the late 19th century. The 1917 recordings by the Original Dixieland Jazz Band help to spread music to other cities such as Chicago.

When the team was moved to Utah, the new owners decided to keep the ‘Jazz’ name.’

Is Utah a Jazz City?

Utah does not have a tradition of jazz music. It is a state located within the Northwestern US. The Utah Jazz is actually based in Salt Lake City. The city is known for the Wasatch mountains, winter sports and being the headquarters of The Church of Jesus Christ of Latter-Day Saints (Mormons).

The ‘Jazz’ name was a tribute to the city of New Orleans before the team was moved to Utah. However, if they were to change the name to represent the city they could go for something like the Utah Saints or the Utah Rockies.

Why Did Utah Keep the Name Jazz?

The Jazz was moved from New Orleans to Utah right before the start of the 1979-1980 season. Due to a lack of time to receive league approval for a name change, they opted to keep the Jazz name and Mardi Gras-themed colours of the uniforms.

In 1979, the NBA had many reservations about Utah’s ability to successfully support the team. But today, Utah Jazz fans are some of the loudest and most loyal in the league.

Will the Utah Jazz Change Their Name?

The Utah Jazz is very unlikely to change their name unless the franchise is moved to a new city. The organization has been the ‘Utah Jazz’ for all but five years of its existence. The name has taken on its own meaning for fans, players, and those associated with the franchise.

Since moving to Salt Lake City, the team has become one of the winningest franchises in the NBA. Hall of Famers John Stockton and Karl Malone played together for 18 seasons under coach Jerry Sloan.

This period made up the majority of a 20-year run of consecutive playoff appearances for the organization. And during the same time, the Utah Jazz made the NBA Finals twice (‘97,’98) losing both times to Michael Jordan and Chicago Bulls.

Will Utah Give the ‘Jazz’ Name back to New Orleans.

It’s highly unlikely that Utah will ever relinquish their name to the New Orleans franchise. This is because the team had been based in Utah for all but 5 years of the organization’s existence. Utah Jazz fans are among the most loyal in the NBA, and the ‘Jazz’ name has a special meaning to them.

After losing the Jazz in 1979, New Orleans was given a second chance at an NBA team. In 2002 the Charlotte Hornets was moved to New Orleans. In 2013, the New Orleans Hornets changed their name to the ‘Pelicans” and the Charlotte Bobcats acquired the Hornet’s name and history (confused yet?).

Many fans of the New Orleans Pelicans are hoping to get the ‘Jazz’ name back from Utah. But it is unlikely and they may have bigger worries. Support and financial problems have plagued a New Orleans franchise once again. And New Orleans may see another NBA team exit in the future.

Sports team names do have clear definitions. But years of history, heartbreaks, successes and failures give team names new meaning. Owing to this, Utah will likely keep the ‘Jazz’ name for the rest of its existence in Salt Lake City.