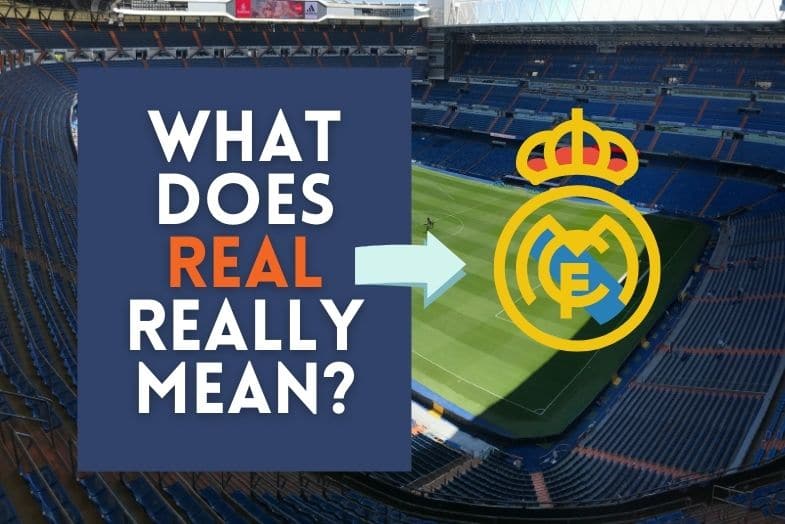 The Real Madrid story has its basis in Spanish royal and political life during the early 20th century, a period where some clubs were clamouring for royal approval.

As a result, there are several examples of ‘Royal’ clubs playing in the Spanish leagues, as we will see.

What Does ‘Real’ Mean in Spanish?

Why is Real Madrid Called ‘Real’?

Madrid Football Club was founded in 1902 and became ‘Real Madrid Club de Fútbol’ – or Real Madrid – in 1920 after the honorary title ‘Real’ was awarded to the club by Spain’s King Alfonso XIII.

At this point, the club was also allowed to add a royal crown to its emblem. Although known worldwide as Real Madrid, the nickname Los Blancos (The Whites), coined because of the club’s traditional all-white kit, is also regularly used in Spain.

Despite the addition of Real to its name, the club is actually one of only four in Spain to have been owned and run by its members, or socios, since its inception – Barcelona, Athletic Bilbao and Osasuna are the others.

It’s worth noting, however, that both of the ‘big two’ clubs in Spain – Real Madrid and Barcelona – are heavily in debt, which was arguably the main driver for both being among the number of top European clubs that tried unsuccessfully to form a breakaway European Super League in 2021 as a means of increasing revenue.

Which Spanish Teams Are Called ‘Real’?

Why Are Spanish Teams Called ‘Real’?

Spanish teams are called ‘Real’ because the title has been bestowed on them by the Spanish royal family. Traditionally, the club would offer a reigning Spanish king a title such as ‘Honorary President’ and in return would receive a royal patronage, allowing them to use the ‘Real’ prefix.

King Alfonso XIII of Spain (who reigned from 1886 to 1931, and thus presided over the birth of Spanish football) was known as a big fan of football, and it was he who bestowed the ‘Real’ title on Madrid CF in 1920.

Real Madrid was among the last of the clubs given the title by Alfonso, who first awarded his royal approval to Real Sociedad in 1912.

However, not all clubs in Spain could be granted this title, or would even want it, not because of what happens on the pitch but instead because of their political background or affiliations.

This would include Real Madrid’s main rivals Barcelona, whose own socios in Catalonia are known for their fiercely pro-Catalan independence stance.

So there we have it – many Real Madrid fans see their club as footballing royalty, and the origins of their name would suggest they might have a point.