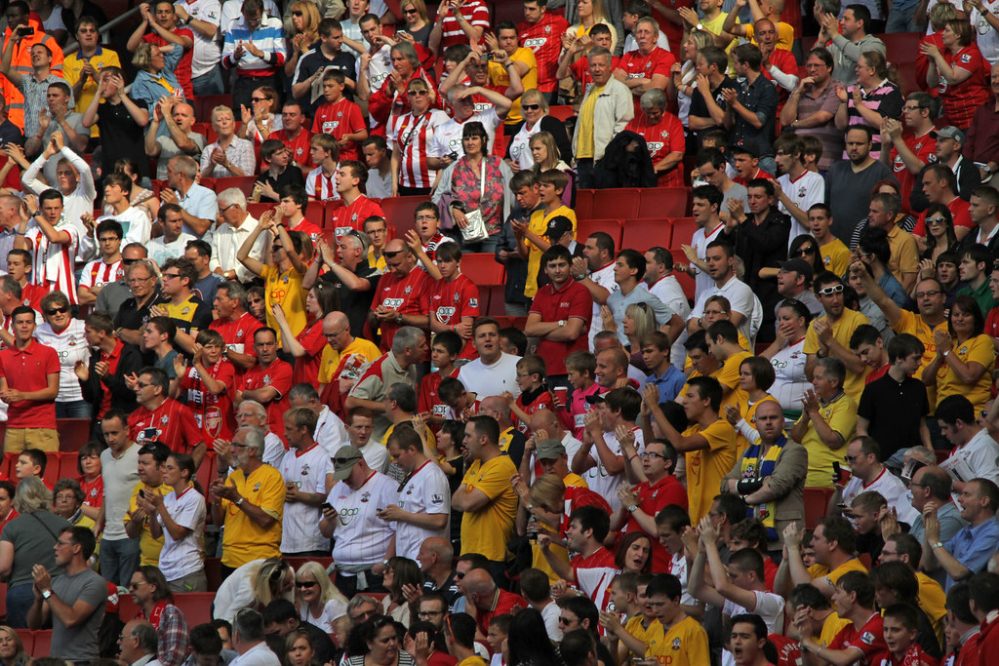 So, let’s now look at how Southampton’s own nickname came into being. Why are Southampton nicknamed ‘The Saints’? Who are their biggest rivals as well as Portsmouth? Let’s take a look at all of this and more…

What is Southampton FC’s Nickname Origin?

Southampton have, in fact, held the nickname ‘The Saints’ since they were formed in 1885, stemming from the club’s origin as a church football team.

Why Are Southampton Called ‘The Saints’?

Southampton are known as ‘The Saints’ as they were originally founded as St. Mary’s Church of England Young Men’s Association. The club changed their name to Southampton Football Club in 1897 as they joined the Southern League, but the “Saint” part of their name stuck by way of a nickname.

They have maintained their church-going roots ever since through their nickname, though. ‘When the Saints Go Marching In’ remains one of their fan base’s most popular songs, while the halo at the top of their crest is another nod to their ‘Saintly’ nickname.

Who Are Southampton’s Biggest Rivals?

Portsmouth are Southampton’s obvious main rivals, despite the two rarely competing in the same league as each other of late.

Much of this long-standing enmity is due not only to proximity geographically (20 miles separate them), but also the two cities’ contrasting maritime histories. Indeed, Southampton and Portsmouth have entirely different ports – the former is a merchant port, the latter a naval.

Since the 1987-88 season, Portsmouth fans have been known as ‘Skates’ by Southampton fans, after the insult was unofficially chosen from a list drawn up by Saints fanzine ‘The Ugly Inside’ in 1988.

This was actually stolen from the civilian population of Portsmouth, who had used ‘Skate’ as a derogatory term for sailors based in Portsmouth Dockyard and other Royal Navy establishments.

Royal Navy matelots on long voyages were supposedly often denied female company, and would keep skate fish with them to relieve their sexual frustrations. Sailors in Royal Navy uniform trying to attract the attention of Portsmouth’s prostitutes would often be refused and told “I ain’t no skate bait, mate!”

In return, Pompey fans have been known to call Saints supporters ‘Scum’ or ‘Scummers’, referring either to ‘scum,’ the naval term for merchant seamen floating on the water, or an acronym for ‘Southampton City (or Corporation) Union Men’

This is said to have originated from Southampton dockyard workers crossing the picket lines in the 1930s during the Portsmouth dockyard workers’ strikes, but its plausibility appears highly contentious.