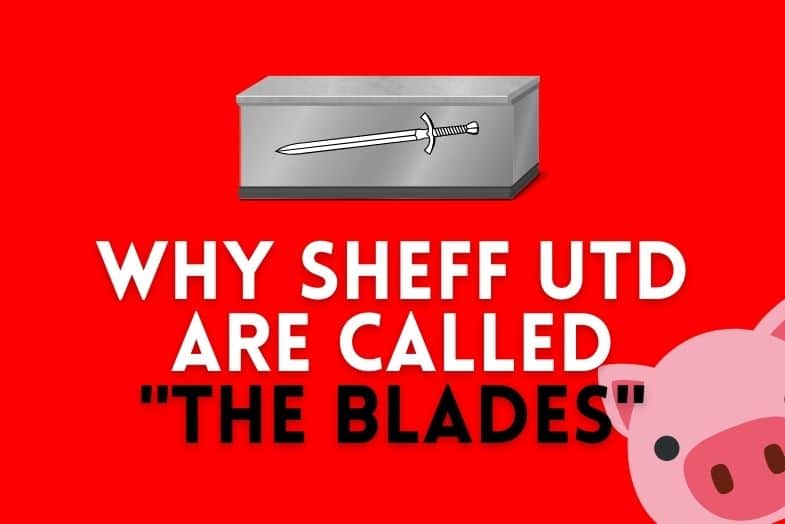 If you’re not from the Sheffield area nor are you a keen student of the Industrial Revolution in England then Sheffield United’s nickname, The Blades, might seem unusual – even a little aggressive! However, dive a little deeper and all becomes clear.

What Are Sheffield United Nicknamed ‘The Blades’?

Sheffield United’s nickname has its origins in the city of Sheffield’s development as the centre of the world’s steel production industry, in particular during the nineteenth century.

Plentiful availability of iron in the area, with the added advantage of coal and good sources of running water to power the industry, created the perfect conditions for steel production in and around Sheffield.

There were some truly sharp minds that helped push the steelmaking industry forward in Sheffield. Benjamin Hunstsmen invented the production method for crucible steel in the 17th century and Harry Brearly discovered rustless steel in 1912.

The Blades is not the only nickname associated with Sheffield United.

Another related nickname for Sheffield United is the ‘Cutlers’. This nickname also comes from the city’s reputation for steel production: One of the typical uses for steel is as cutlery, hence the Cutlers.

One rather less endearing nickname sometimes attached to Sheffield United is ‘Pigs’, as we’ll now discuss.

Why Are Sheffield United Called ‘Pigs’?

If you’re a fan of Sheffield United’s rivals, Sheffield Wednesday, you might not refer to them as The Blades, Cutlers, or United. Instead, you might call them Pigs.

How Many Titles Have Sheffield United Won?

Sheffield United has been competing across various football leagues for well over a century and have picked up some silverware over the years.

The Blades have won the top division of the English football pyramid one time way back in 1898 and, even with the help of the best betting offers available, you’re unlikely to win much money backing them to add to that tally any time soon!

They’ve also won the FA Cup four times (most recently in 1925) and are one of the few clubs to have won the league title in each of the top four levels of English professional football.