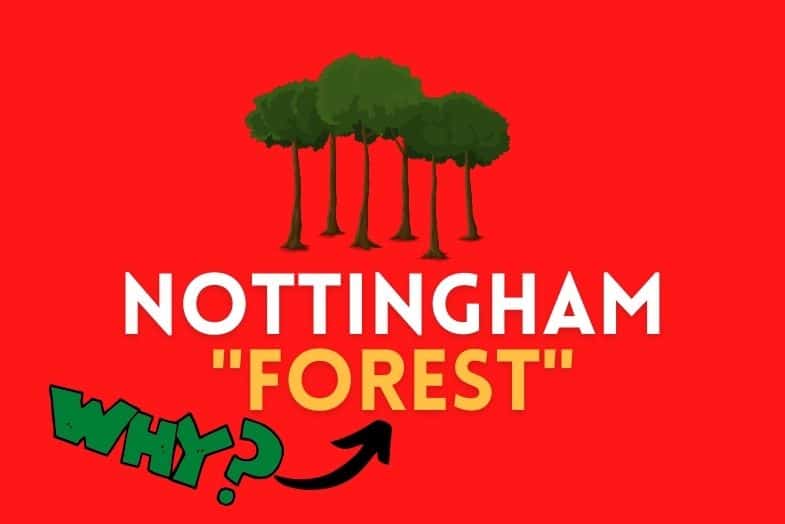 Like many in English football, Nottingham Forest has had highs and lows during its existence. As time moves on, the club’s glory years of the late ’70s and ’80s get further away. It’s only a matter of time before the vast majority of supporters won’t have even been alive during a major trophy win.

For the 2022/23 season, Forest will return to the Premier League, and that’s good news for everyone (except Notts County and Derby).

Nottingham is one of the oldest clubs in football. In its heyday, the club won several trophies including two European Cups, an FA Cup, and a First Division Title.

Promotion doesn’t always go so smoothly. Just ask the likes of yo-yo clubs like Fulham. But is Forest one of the sleeping giants of European football?

Nottingham Forest goes by several nicknames. The most well-known is simply just ‘Forest’. Other popular nicknames include Garibaldi, The Tricky Trees, Super Reds, and NFFC.

The nickname ‘Garibaldi’ is about the origins of the club which began with a group of Gaelic shinty players. In 1865, the group met together and reached an agreement to drop Shinty in place of playing association soccer.

They purchased 12 ‘Garibaldi Red’ caps (in reference to Italian patriot Giuseppe Garibaldi) and that was the beginning of the club colours. This decision made Forest the first club to officially don red.

Supporters never like the club to be referred to as ‘Notts Forest’. This is because the term ‘Notts’ refers to the entire county of Nottinghamshire including the City of Nottingham. This means anything ‘Notts’ is tied to NFFC’s bitter rivals, Notts County.

Forest’s City Ground is merely 300 yards away from Notts County’s Meadow lane–too close for comfort! No other two professional club grounds are as proximal to one another.

Why Are Nottingham Forest Called “Forest”?

Nottingham Forest is called ‘Forest’ in reference to the club’s first ground. In 1865, the club played its first matches at the Forest Recreation Ground in Nottingham. The ground is based in what would have been Sherwood Forest in medieval times. It has hosted sport for over 300 hundred years.

In a similar fashion, NFFC has also been nicknamed the “The Forest” or the ”Foresters”.

Why Are Nottingham Forest Called ‘The Tricky Trees’?

Since the club initially played at Forest Recreation Ground near Sherwood Forest, the club has always been called “Forest”. For nearly the same amount of time, the supporters have also given the club the nickname “The Tricky Trees”.

In the ’90s, there was a popular fanzine named The Tricky Tree.

Forest supporters are commonly called “Scabs” by opposing fans in reference to the miners’ strike from 1984-85. During this time, Nottingham coal miners failed to offer support to the movement and continued to work as usual.

The insult is especially hurled at NFFC supporters by visiting fans from Yorkshire and other northern football clubs.

Why Do Nottingham Forest Sing Mull of Kintyre?

Mull of Kintyre was released by Paul McCartney and Wings in the late ’70s. It was quickly adopted by Forest supporters during the 1978 campaign in which the club won the First Division. Since then, the song has become an anthem for the club calling back to the glory days. Of course, the words of the song have been altered to reflect the club. You can hear a chilling rendition of the anthem sung by supporters at Wembley for the 2021/22 Championship Play-off Final.