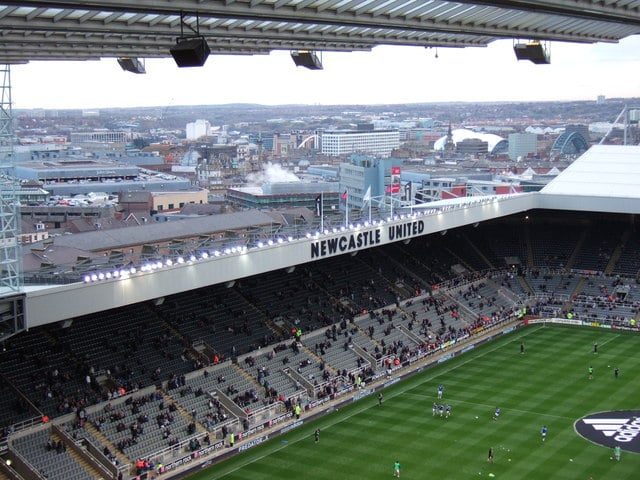 We’ve looked previously at why Southampton are called ‘Saints’, as well as why England are known as the ‘Three Lions’, and how Leicester adopted the nickname of ‘the Foxes’.

So, let’s now look at how Newcastle’s two ‘other’ titles, ‘the Magpies’ and ‘the Toon’ came into being. After that, we’ll explore who Newcastle’s biggest rivals are, and the other names these supporters have for them. Let’s go:

Why Are Newcastle United Called ‘The Magpies’?

Newcastle United are known as ‘The Magpies’ because of their iconic black and white home strips – the same colours as those of the Eurasian magpie bird.

Though, after being founded in 1892 by merging two clubs (West End and East End), Newcastle’s jerseys were not initially black and white. They wore red and white, or red and black, among other colours, with black and white firstly their change strip.

It was not until 1894, when it was agreed that their home kit should differ in colour to those worn by East and West End previously, that they began wearing black and white on a regular basis.

A magpie has even featured on two former Newcastle United crests – between 1976 and 1983, where the bird was placed in front of the city’s Castle Keep and on the River Tyne – and then from 1983 to 1988, which saw a small magpie underneath a bold spelling of ‘NUFC’ in a circular shape.

Why Are Newcastle United Called ‘The Toon’?

Newcastle’s nickname of ‘The Toon,’ or ‘Toon Amy,’ simply stems from the way many folk from the city (otherwise known as ‘Geordies’) pronounce the word ‘town’.

Even though Newcastle itself is not a town – it’s one of the UK’s biggest cities with a population of about 170,000 – nor are the team called ‘Newcastle Town,’ of course. Though, ‘town’ is a word commonly referring to a city centre in English dialect, and Newcastle’s stadium, St James’ Park, is right in the centre of the city.

In fact, such connotations date back as far as Old English, the language spoken by the Anglo-Saxons in 500 AD, up to the Norman conquest. Then, the word ‘tun’ meant an ‘enclosure, estate, farm, village,’ but would have pronounced similarly to ‘toon.’

The ‘Great Vowel Shift’ between the 14th and 17th centuries is believed to be when the gradual mispronunciation of British words began, whereby many with an ‘oo’ began to be pronounced with the ‘ow’ sound of today, e.g. ‘town’.

Though, some areas remain less affected than others, particularly Scotland and, of course, the North East of England.

Who Are Newcastle’s Biggest Rivals?

The obvious first answer is Sunderland, their North East neighbours with whom they contest the Tyne-Wear derby (Newcastle is based in Tyneside, Sunderland in Wearside).

Beyond Sunderland, Teeside-based Middlesbrough are the closest in terms of geographical rivalry with Newcastle, while given their previous in the Premier League with Manchester United (Kevin Keegan loved to beat them, you know) and, to a lesser extent, Liverpool, you could arguably call these two clubs their rivals, too.