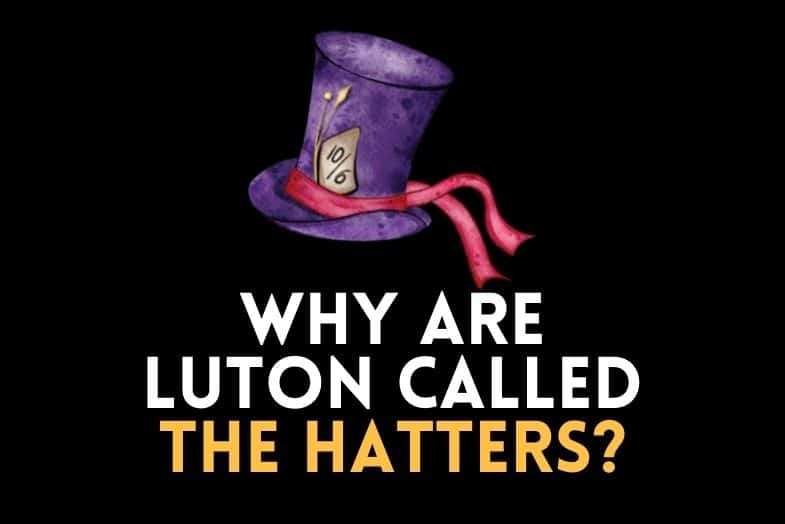 While the nicknames of some football clubs are pretty much self-explanatory – United, City, the Reds or the Blues – others require a little more explanation. For every United there’s a Gunners or Owls or Hornets (as we’ll see later).

Luton Town’s iconic nickname of The Hatters falls into the latter category. So what are its origins? Let’s find out, and learn more about the club itself.

By far the most common nickname of Luton Town is The Hatters, which is also used to refer to their fans.

Luton Town was the first club in the south of England to turn professional, and was making payments to players as early as 1890. Around that time, newspapers in London would refer to the club as The Straw Plaiters, a reference to the town’s world famous hat-making industry.

Why Are Luton Town Called ‘The Hatters’?

Luton Town are called The Hatters because Luton and its surrounding towns and villages were once an internationally important centre for hat-making, leading to the club being given the famous nickname.

The club’s crest – and the crest of Luton itself – both include images of the straw hats for which the town was once world-famous.

Who Are Luton’s Rivals?

Luton Town’s main rivals are Watford; the clubs are geographically close, with only 16 miles separating them, and matches between the sides have often been blighted by crowd trouble.

After fighting in Watford city centre and inside the club’s Vicarage Road ground before and during a League Cup fixture in 2002, 29 fans – 25 Luton and 4 Watford – were prosecuted, with some being barred from football stadia for life.

However, and unfortunately for The Hatters, there has been little on-field footballing rivalry to speak of in recent years; the Hornets of Watford have been the higher-ranked team at the end of every league season since 1997.

With Luton being in Bedfordshire and Watford in Hertfordshire, matches between the two are sometimes referred to in the media as the “Bed-Herts derby”.

A 2003 survey of Luton Town fans revealed that supporters of the club also felt animosity towards Queens Park Rangers.

Have Luton Town Ever Been in the Premier League?

Luton Town have never played in the Premier League, but they can perhaps count themselves as unfortunate having been relegated from the-then First Division in 1991/92, the season before the Premier League came into existence.

That relegation in 1992 meant that after ten consecutive years of top-flight football, Luton were consigned to the second tier and missed out on the lucrative new Premier League set-up, together with West Ham United and Notts County.

When Were Luton Town Last in the Top Flight?

Luton Town last played in the English top flight during the 1991/92 season, the final season of the First Division before it was rebranded as the Premier League. They finished 20th in the 22-team league and were relegated.

Since then, the club have endured on- and off-field crises, and had a five-season spell in non-league football from 2009 to 2014.

If they ever do make it into the Premier League, Luton will become the first club to go from top flight to non-league and back in English football history.