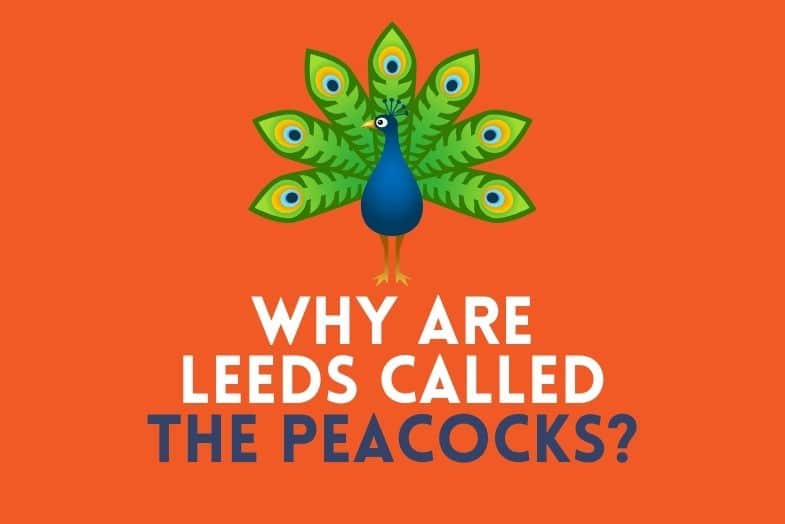 All football clubs, and even national sides have nicknames. Some are pretty obvious (e.g. Chelsea = ‘The Blues’) while others are a little more obscure (e.g. Why are England called ‘Three Lions’?)

Indeed, one of the less obvious nicknames in English football belongs to Leeds United, who are nicknamed ‘The Peacocks’. But why are Leeds called ‘Peacocks’ and what nicknames do fans of other clubs call them?

Having been in the doldrums for much of the 21st century, which included a miserable spell in the third tier of the Football League, the club is now back playing at the pinnacle of the English game in the Premier League.

While backed vociferously and in big numbers by their own fans, they are notoriously unpopular with fans of other clubs, as we will see.

They have particularly intense rivalries with Manchester United and fellow Yorkshire clubs such as Sheffield United and Sheffield Wednesday. But who doesn’t love a good rivalry in football?

What Are Leeds’ Nicknames?

Why Are Leeds Called ‘The Peacocks’?

The Peacocks nickname originates from the name of the pub closest to Leeds’ home ground of Elland Road, which is called The Old Peacock.

The club have played there since being formed in 1904 as Leeds City.

After City were disbanded by the football league over allegations of making illegal payments to players, Leeds United, as we know them today, were formed in 1919.

Eventually, the ground came to be known as Elland Road, sitting as it does on the A643 road to Elland in Yorkshire.

As for The Peacocks nickname, even the club itself now states that it is virtually obsolete.

What Are Leeds Fans Called?

Leeds fans don’t have a specific collective name, but do like to use the acronym ALAW to describe themselves, meaning ‘All Leeds, Aren’t We?’

Leeds fans have also adopted the ‘Dirty Leeds’ tag, first attributed to them by the media and fans of other clubs, as something of a badge of honour.

Why Are Leeds Called ‘Dirty Leeds’ By Other Fans?

Fans of other clubs use the term ‘Dirty Leeds’ because the club’s style has been viewed down the years as being direct and overly physical, a view exacerbated by events both on and off the field of play.

On the pitch, this can be traced back to a controversial match against Everton in 1964, where Leeds captain and fiery Scotsman Billy Bremner made his presence known within seconds by clattering Everton’s Ken Pickering.

Things became so heated that referee Roger Stokes ordered the players off the pitch just before half time to provide them with a cooling-off period – something unheard of in football in England.

Leeds won the match 1-0, but hardly won the sympathy of football fans, the media or even the Football Association, whose own newly established disciplinary table had Leeds highlighted as the ‘bad boys’ of the league that season.

The Dirty Leeds tag has stuck since then, and the nearly-all-conquering side of the late 1960s and 1970s were known as much for their steel and grit as for the quality of their football.

Off the field, Leeds fans formed one of England’s most feared hooligan crews during the 1970s and 1980s, which only served to play up to the Dirty Leeds reputation among opposition fans and clubs.