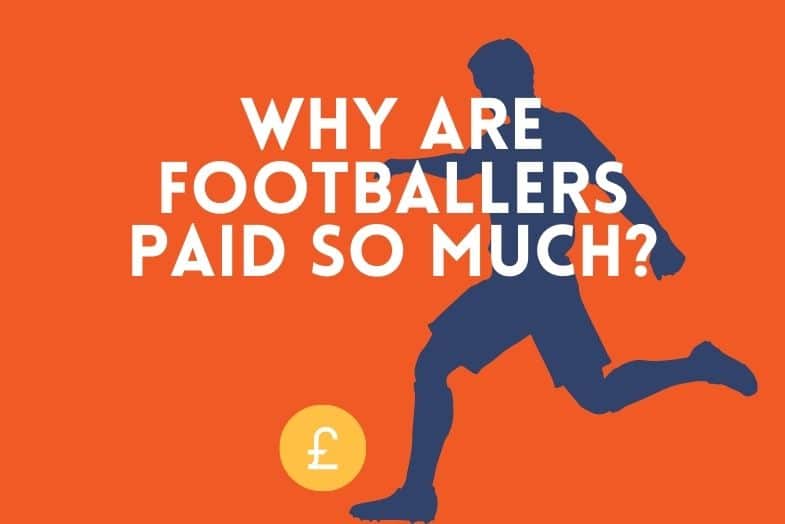 Every time the globe is gripped by uncertainty, people all over the world question whether or not the status quo is good enough. Things like The Great Depression, and World Wars I and II make us reflect on life. With a global pandemic akin to the Spanish Flu, many of us can only wonder, “Is this still working for us?”

Maybe it’s better to have a greater work-life balance and enough income to eliminate financial stress? Following this train of thought, those with so little can only feel hard done by those who have everything. And near the top of the list, professional footballers!

In a vacuum, all footballers do is workouts and practice a few hours a day, play 90-minute matches, and give media interviews. All for tens of thousands of pounds paid weekly. Arguably still the best player in the world, Lionel Messi is set to earn £82 million per year at PSG. It makes you think, is Leo dazzling on the pitch really worth such exorbitant amounts of money?

And concurrent with global uncertainty and a world public health crisis, why do footballers like Messi earn so much more than those fighting on the frontlines of healthcare? Well, folks, it has a whole lot less to do with any altruistic or intrinsic value. And it has a lot more to do with numbers and cold hard cash.

The globalisation of western capitalist ideals has only meant one thing for football; more money. And nowhere has enjoyed making more money than the top five European football leagues.

Professional footballers are increasingly paid more with each passing year. At the same time, wages for many professional jobs like doctors, teachers, and social workers have been stagnating for decades. Most footballers earn more money in one week than most people earn in a year.

Footballers in the world’s best divisions can make those sums of money in a matter of days or a week. Here are some average footballer salaries from a 2018 report.

How Much Do Premier League Players Make?

The average salary in the Premier league is £60,000 per week or £3 million per year. Many of the top players at the biggest clubs earn upwards of £250k per week or more. In the 2021/22 season, 23 players were earning more than £10 million annually.

If that’s not enough for a footballer to “take care” of his family he can also look to paid sponsorship. And top players will also be paid to train with the national team and awarded prize money for placing in competitions.

Why Do Premier League Players Get Paid So Much?

Premier League players get paid a lot of money due to the market forces of supply and demand. There is a limited supply of elite footballers with world-class skills. The Premier League generates billions in revenue every year and is willing to pay top wages to recruit these players.

Over many decades, players have gained more control over wage negotiation. In 1990, a player for RFC Liege in Belgium, Jean-Marc Bosman, wished to leave the club. However, as was acceptable at the time, Liege refused to release him and cut his role and wages.

Jean-Marc would sue the club. And in 1995, the European Court of Justice ruled football clubs could no longer restrict players out-of-contract from leaving the club. The court ruled this was a restriction on freedom of movement of workers and a violation of EU law in what became known as the Bosman ruling

Because of the Bosman ruling, this meant clubs would no longer have to pay large transfer fees to acquire players with expired contracts. Instead, the transfer savings were now going to the player’s wages. With players free to choose their next destination, this meant all clubs across Europe would be competing to sign them.

Technology improvements and globalisation have also continually grown the revenue of the Premier League. As an example, for less than £200 million, broadcasters purchased TV rights for the Premier League from 1992-97. The Premier League’s 2016-19 broadcasting rights were purchased for £5 billion. That represents a growth rate of 2500% over a 20-year span!

UEFA’s and the Premier League’s Financial Fair Play (FFP) regulate club spending to a point. But they in no way place a cap on player salaries. As long as teams aren’t losing money for consecutive years, they can pay players as much as they fancy.

According to Deloitte, the total revenue of the English Premier League has been on the rise every year besides a dip in 2019/20 due to COVID 19. In the 2020/21 season, the total league-wide revenue was £5.45 billion. That’s over £270 million per club!

Footballers are not overpaid. They earn high wages due to the market forces of supply and demand. Additionally, the matches they play in generate millions and billions of pounds each year. For the uniqueness of their abilities and the amount of revenue they generate, they are paid quite fairly.

All over the world, top division football generates a huge amount of money. In 2019/20, the “Big Five” European Leagues (Premier League, Bundesliga, La Liga, Serie A, Ligue 1) account for €15.1 billion of the €25.2 billion generated by all leagues in Europe.

The Big Five European football leagues generated nearly 60% of all football-related revenue in Europe. But this doesn’t happen by accident. The top leagues feature the world’s strongest teams with the best players. And it isn’t cheap to get a talent like Lionel Messi or Neymar.

This phenomenon can be observed in the Premier League where the majority of revenue is spent on player wages and transfer fees. In the 2018/19 season player wages ate 61.5% (£3.2 billion) of the total revenue of 5.2 billion. In the following 2019/20 season, revenues decreased to £4.5 billion but wages stayed almost that same at £3.3 billion eating up over 73% of league earnings!

Should Footballers Be Paid Less?

Whether or not footballers should be paid less depends on if their market value decreases. Currently, elite footballers are in short supply and their skills generate huge amounts of money. If the market becomes saturated with world-class footballers, or fans stop spending money to watch football matches, then footballers will be paid less.

When people all over the world compare footballer salaries to average and median wages, they can’t help but think footballers should be paid less. Most people have to work very hard at their jobs. So it’s hard to imagine someone else working hundreds or thousands of times harder to justify their earnings.

The average full-time salary in the UK for 2021 was £31,285 per year. That number pales in comparison to the average annual wage of a Premier League footballer of £3 million. That means English top-flight football players earn nearly double the average Brit’s salary in just one week of training/ playing matches!

Why Are Footballers Paid More Than Doctors?

Footballers are paid more than doctors because at their job their trade generates more money. For the 2020/21 season, it is expected that each first-team footballer will generate over £10.2 million adding up to a total league revenue of £5.1 billion.

Footballers are paid huge amounts of money because their skills are in high demand and short supply. However, there are plenty of other professions that require an extremely rare skill-set.

Take for instance neurosurgeons. Like many medical specialities in the UK, there is a need for more neurosurgeons. This is because of the challenging and rigorous requirement to become a full-time practitioner. Compared to the average physician, neurosurgeons have an average annual salary of over £271,857.

‘Premier Leaguers’ would have to break a sweat and work nearly 5 weeks to earn that amount of money. Of course, the highest-paid players would only need to work a week or less!

There are currently fewer neurosurgeons in the UK than there are players in the Premier League. So why is the pay over ten times less you ask? Well, football clubs are businesses. Whereas, the NHS is a government-funded public service.

One is a business looking to maximize profits. The other is a non-profit organisation looking to maximize coverage of the national population and improve patient outcomes. Neurosurgeons have complex and diverse motivations for spending nearly a decade training in the profession. But for most, money is quite low on the list. They aren’t likely to leave the NHS to work for another public healthcare service (because there isn’t one). This means there isn’t unregulated wage spending that aligns with profits.

Professional footballers are paid extremely well. Individual player salaries are determined by a free market. World-class players will continue to be paid huge sums of money until football fans around the world stop paying to watch football. If anything, footballer salaries in the top divisions will only continue to head to the moon.