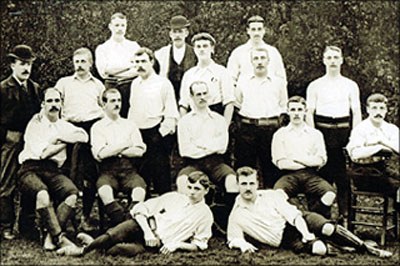 For many purists of English football, the 2019 Championship play-off final was contested between the ideal opponents.

Both Aston Villa and Derby County, as founding members of the Football League in 1888, are blessed with the sort of high esteem not quite felt towards so-called ‘smaller’ Premier League clubs, such as Bournemouth, or Brighton & Hove Albion, for instance.

Indeed, you will be hard-pressed to find anyone who has drawn up their ‘ideal’ top-flight without featuring both, if not one, of these two sides.

But why do Derby have the seemingly ‘incorrect’ name they do? After all, Derby is a city and Derbyshire is a county… surely they should be Derby City or Derbyshire County.

Why not ‘Derby City’ or ‘Derbyshire County?’

One of the oldest clubs in the country, Derby’s heritage is a particularly fascinating story.

Unlike a number of English city-based sides, they don’t take the obvious suffix ‘City’ after the name, despite them being the only major football team in their city.

Why? Well, because the club were initially set up in 1884 as an affiliate to Derbyshire County Cricket Club, which formed in 1871.

But after a horrendous season the previous year, which saw the cricket club lose all ten of its Championship matches, more revenue was needed, and needed fast.

At the same time, football was already becoming increasingly popular in the area. Derby Midland had formed in 1881, and would go on to be founding members of the Midland Football League in 1889, while the 1884 Derbyshire Cup final attracted a crowd of about 7,000, a record figure for a match in the region.

With this in mind, and to simply give the cricketers something to do during the winter, Derbyshire County Cricket Club approached the Derbyshire FA, formed in 1883.

It proposed the formation of a football club under the name ‘Derbyshire County,’ to underline its affiliation with the cricket club. But when this was rejected due to being too lengthy, the name was shortened to ‘Derby County,’ which formed in 1884.

In a move that would be unheard of nowadays, Derby County initially hosted matches at the cricket club’s stadium, the Racecourse Ground, where they would stay until 1895, before moving to the Baseball Ground and then to their current home, Pride Park, in 1997.

The first few years saw them contest a number of friendly matches and FA Cup ties, losing their first competitive match in the FA Cup 7-0 at home to Walsall Town. They didn’t play in their typical black-and-white strips of today, either; Derby initially sported the County Cricket Club’s colours of amber, chocolate and pale blue.

They would finish tenth in their first season, which started with a 6-3 win over Bolton having been 3-0 down, but were re-elected into the league for the following campaign. Then, in 1891, the club merged with Derby Midland, leaving the Rams as Derby’s only professional football club.

It may be a city in its own right, but Derby’s proud history reflects more on its county; a county clearly seeped in football tradition.

ALSO READ: Where do ‘Plymouth Argyle’ Get There Name From?