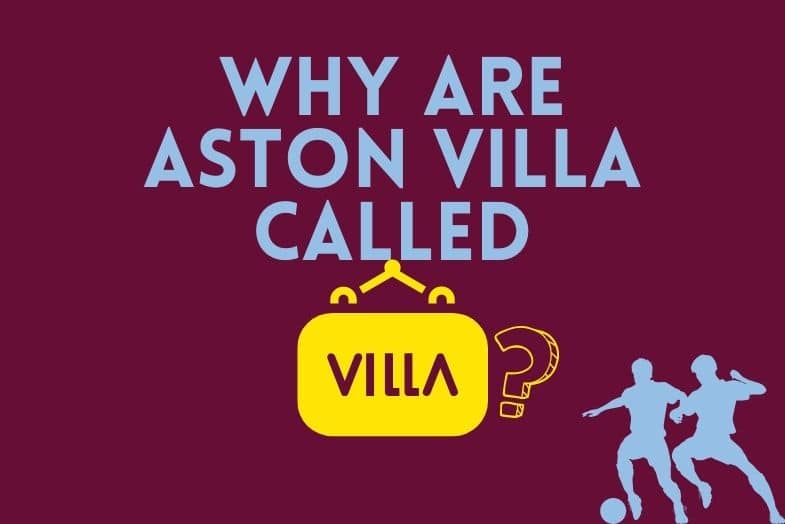 In football, there are tonnes of common nicknames for clubs. The likes of Rovers, United, Town, and City are commonplace throughout the football pyramid.

Some of the more unusual nicknames, like Villa or Wednesday, however, help clubs stand out from the crowd. But where do these names come from? We’re looking at how Aston Villa got its name, and what exactly the term ‘Villa’ stands for.

The name ‘Aston Villa’ originates from the Lozells area of Birmingham. Where Heathfield Road, Lozells Road, and Villa Road joined was dubbed “Aston Villa” due to the name of a large house in the vicinity. That house was situated near the Aston Villa Wesleyan Chapel, the birthplace of Aston Villa FC.

Aston Villa was formed in 1874, making it one of the oldest football clubs in the world. It was a founding member of the Football League in 1888 and is one of the most successful English teams ever.

Since being formed, football fans in Birmingham have flocked to Villa Park to watch their heroes in action. Many teams have been welcomed over the years, both friends and foes. Considering how long Villa has been around, it’s fair to say the club has its share of rivals.

One of Villa’s biggest rivals, West Bromwich Albion, not only shares a West Midlands home with them but also an interesting nickname. Just like Aston Villa’s unusual nickname, many football fans wonder why West Brom are called the Baggies.

Why Are Aston Villa Called ‘Villa’?

Aston Villa gets its name from the area in Birmingham where the club was formed. That area, Lozells, was known as ‘Aston Villa’ after the name of a large house. That house would be where Villa Cross Wesleyan Chapel Cricket Club was formed in 1872 and two years later the football club followed.

Once formed, Aston Villa FC went from strength to strength. Besides being a founding member of the Football League, Villa quickly set about establishing itself as one of the best.

The first league title Villa won came in 1894, and over the years six more top-flight titles would be added to the trophy cabinet. Villa also has a European Cup to its name, much to the envy of local rivals West Brom and Birmingham City.

What is Aston Villa’s Nickname?

Derived from its name, Aston Villa’s most prominent nickname is the Villans. Fans identify themselves as Villans but there are other nicknames for Aston Villa. Thanks to the crest, Villa is also known as the Lions. Another of Villa’s nicknames is the Claret and Blue Army thanks to the club colours.

Football clubs are commonly named after the places they are based in. The origins of teams like Liverpool, Norwich, and Newcastle need little explanation. After all, it would be kind of strange to be called Tottenham Hotspur but be based in Glasgow.

The same goes for London-based Crystal Palace and its wonderful name. It’s not obvious where Palace is based by the name alone but a dive into the history of where the Eagles get their name from reveals all.

It’s obvious where some clubs are based if they are named after the city they represent. But other teams, like Villa, don’t have an obvious connection to where the name comes from unless you’re a local. Now we know Villa’s name comes from the specific part of Birmingham the club was formed.