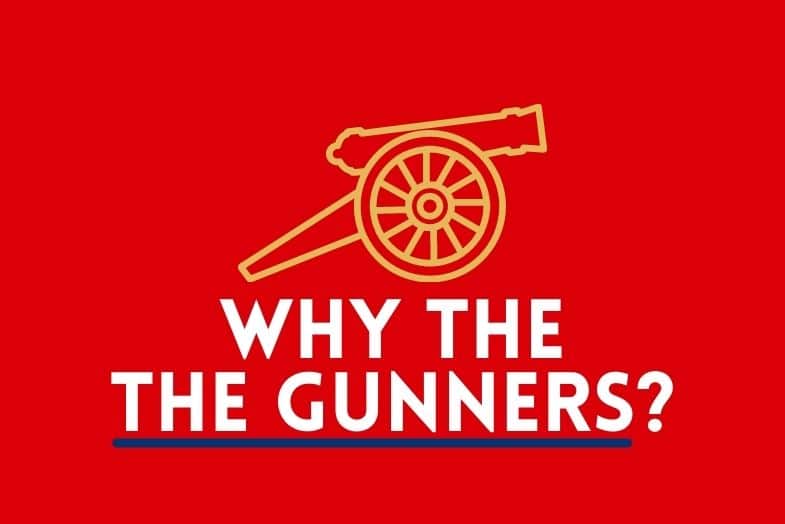 We’ve looked previously at some of the more obscure facts about Arsenal Football Club, as well as why they’re even called ‘Arsenal’ in the first place.

But have you ever wondered where their nickname, ‘The Gunners’, comes from? And why fans are not known as ‘Gunners’, but ‘Gooners’? All will be revealed below…

Why Are Arsenal Nicknamed ‘The Gunners’?

Arsenal Football Club are nicknamed ‘The Gunners’ because the club was formed in 1886 by munitions workers in the Royal Arsenal factory in Woolwich in south-east London, near where Arsenal were initially based.

The Royal Arsenal factory produced weapons and explosives, and so the nickname, and indeed the cannon on their badge, is a nod to their heritage.

But given the history associated with the Royal Arsenal factory, the nickname ‘The Gunners’ has been a permanent reminder of the club’s roots.

For instance, Arsenal’s logo has changed 11 times in its history. In 1888, Arsenal released its first logo, which was the same as the crest of the Metropolitan Borough of their local town, Woolwich.

However, in 1922, Arsenal’s trademark cannon featured for the first time in their logo, as the club had moved away from Woolwich to their new home ground at Highbury. Since then, the cannon has stayed in all the crests, symbolising the roots of the football club.

From 1994 to 2001, the term ‘Gunners’ featured on the top of the crest, paying homage to their celebrated nickname.

Although ‘Gunners’ has been removed from the crest, the cannon remains, and has become an icon for Arsenal and the club’s identity, which means it is likely that the cannon will remain a part of the crest for the foreseeable future.

What is the Nickname for Arsenal Fans?

Arsenal fans are more commonly known as ‘Gooners’. Indeed, while the players and the club in general are usually referred to as ‘Gunners’, the fans tend to go by the nickname ‘Gooners’ (hence the song ‘Ooh, to be a Gooner’, for instance).

You might think that Gooners is simply a slight play on words of the club’s official nickname The Gunners, but the backstory is not quite as simple as that, as we will see later.

But what is for sure is that Arsenal’s huge fan base now take great delight in being called Gooners, which hasn’t always been the case over the years.

What do Spurs Fans Call Arsenal?

Fans of Arsenal’s biggest and nearest rivals, Tottenham, have been known to call Arsenal ‘scum’, or ‘Woolwich’, in reference to the fact that they, unlike Spurs, do not have north London roots.

The north London derby has been a world-famous mainstay of the English football calendar for years now, but of course given Arsenal’s history and south London roots, this has not always been the case, and Spurs fans like to remind the Gooners of this.

The story of why Arsenal relocated to the north of the capital is a strange one, as it was actually prompted by the burning down of part of their original stadium by suffragettes protesting against women not having the right to vote in Britain.

It was after this happened in 1913 that the club moved north to the new Arsenal Stadium in Highbury, and an iconic local rivalry was born.

The term ‘Gooner’ is widely believed to have stemmed from the ‘Goon Squad’, a well-known Arsenal hooligan firm in the 1970s.

Hooliganism was rife in British football in the 1970s and 1980s, a period in which many clubs had at least one ‘firm’.

The loud and rowdy nature of Arsenal’s firm led to them being referred to as ‘goons’, and the Gooners nickname for Arsenal fans stemmed from there.

Arsenal fans aren’t the only ones to adopt the use of a nickname that started off as an insult. Leeds United supporters proudly use the term ‘Dirty Leeds’ when talking about their team, despite the clearly negative connotations.

But there is also a theory that the word ‘Gooner’ first came into being in the George Robey pub in Finsbury Park, coined by an Irishman who would mean ‘Gunners’ but famously pronounce it ‘Gooners’.

Whatever the case, Arsenal’s ‘Gooners’ have used the term for years now, and it seems set to remain as the club’s unofficial nickname.