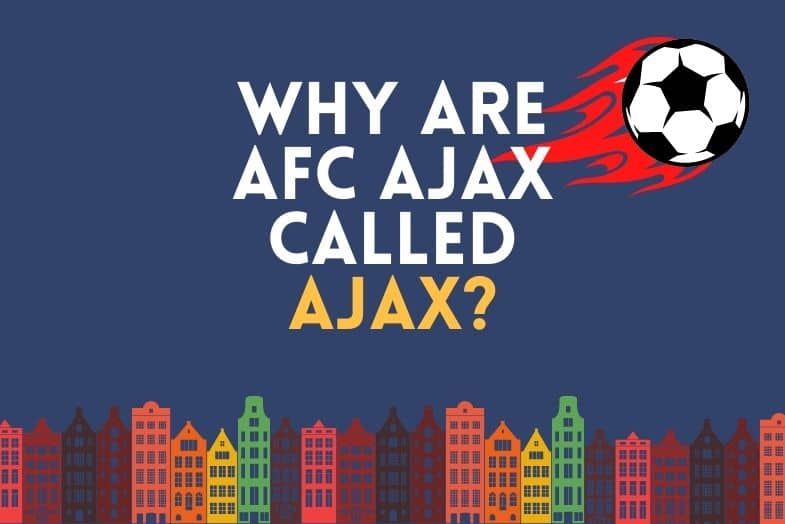 Many football clubs around the world can trace the origins of their name back to an array of weird and wonderful sources, and the most successful Dutch club of all time are no exception to this.

While Italian football has Juventus as its most successful and arguably most famous club, the Netherlands has Ajax, another side whose name has its own unusual backstory, this time based in Greek mythology.

Let’s learn more about the name Ajax and the club that was named the seventh most successful European club of the twentieth century by the International Federation of Football History and Statistics.

What is Ajax’s Full Name?

What Does ‘Ajax’ Mean in Dutch?

The simple answer is that ‘Ajax’ doesn’t mean anything in the Dutch language, but the word has become synonymous, both at home and abroad, with a certain style of entertaining and fluid football.

In 1965, under manager Rinus Michels, the club adopted a Total Football philosophy, where all the players could in essence play in any position on the field.

Under Michels, and subsequent managers, Ajax went on to dominate Dutch and European football during the 1970s, winning the European Cup in 1971, 1972 and 1973.

Since then, the club has produced or nurtured some of the best young talent to grace the footballing stage, including many who have starred in English football such as Dennis Bergkamp, Luis Suarez and Christian Eriksen.

By producing this conveyor belt of talented young, sought-after players, Ajax have managed to achieve success on the field and remain profitable off it.

Why Are Ajax Called ‘Ajax’?

Ajax took their name from the Greek mythological hero of the same name – the fact that Ajax remained undefeated throughout his life as a warrior appealed to Floris Stempel, one of the club’s original founders.

What Does the Ajax Logo Mean?

The current club logo was adopted in 1991 and is an abstract image of Ajax, the Greek mythological hero from whom the club takes its name. It consists of 11 lines, which represent the 11 players in a football team.

The original club logo was a drawing of a player in the club’s first red, white and black strip, which was altered in 1911 when Ajax removed the black from their colours and adopted the now-famous white kit with a red vertical stripe.

An image of Ajax first appeared on the team’s shirts in 1928, when the logo consisted of a detailed drawing of him alongside the name ‘AJAX’ and a red-and-white crest.

Many fans of the club want to see the more detailed image of Ajax return to the club logo in some form.

Who is the Man in Ajax’s Logo?

The man in the Ajax logo is Ajax himself, the mythological Greek warrior from whom the club takes its name. Unlike most characters in Greek mythology, Ajax was never defeated, and he is portrayed as a towering figure in Homer’s epic poem the Iliad.