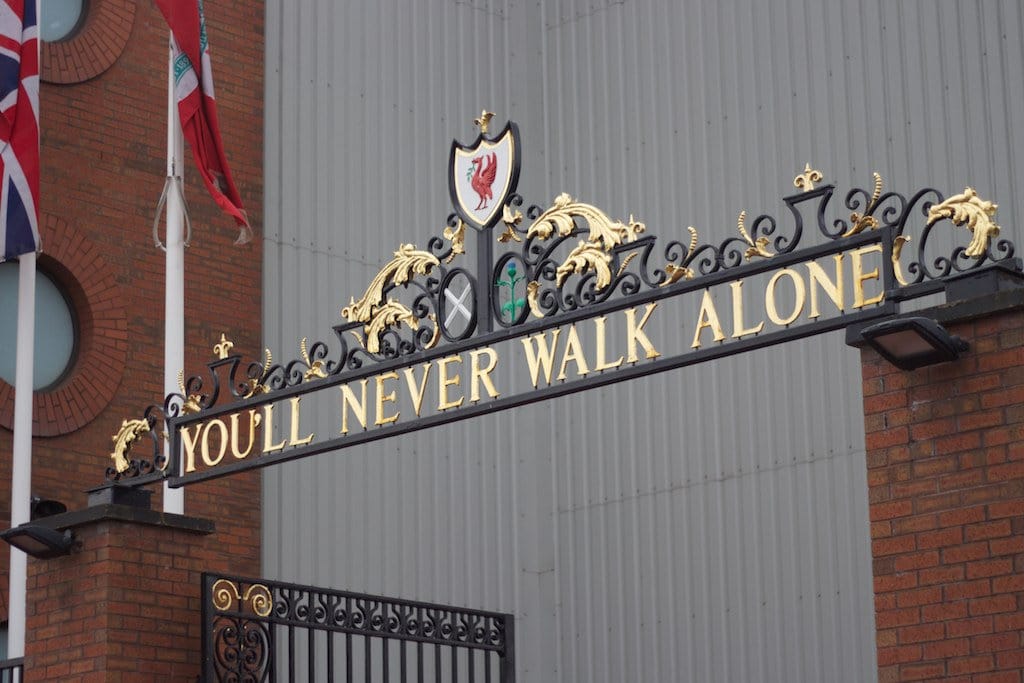 It’s risen to prominence in football through various different clubs and is now considered one of the most iconic songs sung at matches. For Liverpool, Celtic and Borussia Dortmund in particular, ‘You’ll Never Walk Alone’ holds a special place in each of their supporters’ hearts.

But where does the song actually originate from? Who sings ‘You’ll Never Walk Alone’? And which set of supporters claimed it as their own first? Let’s take a look:

‘You’ll Never Walk Alone’ was written by Broadway duo Richard Rodgers and Oscar Hammerstein II for their 1945 musical ‘Carousel’. The song is sung in the second act by Nettie Fowler to comfort her cousin Julie Jordan after Julie’s husband, Billy Bigelow, falls on his knife and dies after a failed robbery attempt.

It returns in the final scene of the musical when Billy, who has been given the chance to return to Earth for one day to redeem himself, watches his and Julie’s daughter Louise graduation class and silently motivates her to join in with the song.

‘You’ll Never Walk Alone’ has since been covered by countless singers, including Frank Sinatra, Elvis Presley and Johnny Cash, but perhaps its most famous rendition came from Liverpool band Gerry and the Pacemakers in 1963. More on that in a little bit.

What Does YNWA mean?

YNWA itself stands for ‘You’ll Never Walk Alone’, of course, with the lyrics themselves evoking feelings of togetherness, unity and, above all else, hope.

From that perspective, then, perhaps it’s easy to see why this song has fitted the scenario of a football match like a glove:

“When you walk through a storm, hold your head up high

“And don’t be afraid of the dark

“At the end of the storm, there’s a golden sky

“And the sweet, silver song of a lark

“Walk on through the wind

“Walk on through the rain

“Though your dreams be tossed and blown

“Walk on, walk on

“With hope in your heart

Plenty more than just Liverpool. The song is also a crowd favourite among Celtic and Borussia Dortmund fans, but while these are often seen as the main three clubs which have adopted it, they’re far from the only ones.

Other clubs who have also taken on the song for themselves include Dutch sides FC Twente, Feyenoord and SC Cambuur, German clubs Mainz and 1860 Munich, Belgium’s Club Brugge and KV Mechelen, FC Tokyo of Japan, CD Lugo in Spain, Greek outfit PAOK and Indonesia’s Bali United.

The song became a hit on the terraces of Anfield, one of the first UK grounds to have its own DJ, not long after Merseybeat group Gerry and the Pacemakers’ cover version was released.

In the event of the harrowing 1989 Hillsborough disaster, in which 96 supporters lost their lives at an FA Cup semi-final between Liverpool and Nottingham Forest at the Sheffield stadium, the song took on an extra meaning and significance.

For instance, while commentating on the memorial service following the disaster, Peter Jones recited the lyrics, which were then sung by a cathedral choir.

When did Liverpool Start Singing YNWA?

The story goes that the band’s lead singer and founding member, Gerry Marsden, gave then-manager Bill Shankly a copy of the single during a pre-season trip of the same year as its release, 1963.

According to former player Tommy Smith: “Shanks was in awe of what he heard. … Football writers from the local newspapers were travelling with our party and, thirsty for a story of any kind between games, filed copy back to their editors to the effect that we had adopted Gerry Marsden’s forthcoming single as the club song.”

The song was Shankly’s final pick during his appearance on the BBC’s ‘Desert Island Discs’ the eve of the 1965 FA Cup final. There is footage, as you’ll see below, of Reds fans singing YNWA at Wembley during that 2-1 win over Leeds, with commentator Kenneth Wolstenholme calling it their ‘signature tune’.

While it is not certain, it is likely that Liverpool first adopted the anthem in 1963, given both Marsden and Shankly’s exchange, and given it entered the top ten in the charts ahead of a home game against West Brom in October of that year.

The Anfield pre-match setlist would often consist of a top ten countdown at the time, so it surely would have featured then – the song spent ten weeks in the top ten, as it happens.

Though some debate they beat Liverpool to the punch here, it’s widely accepted that the supporters of the Glasgow giants adopted the anthem themselves after playing Liverpool at Anfield in the 1966 European Cup Winners’ Cup semi-finals. These days, it’s still belted out at Parkhead before kick-off, especially on European nights.

There’s also a school of thought that Celtic took the song later than this. In the 1970s, Celtic and Liverpool met in a number of friendlies and testimonial matches for the likes of Ron Yeats, Tommy Burns and Billy McNeill. It is then, some say, that Celtic fans started singing YNWA, albeit intermittently until the Hillsborough Memorial Match in 1989, after which it began to become more commonplace on the Parkhead terraces.

Why do Dortmund Fans Sing YNWA?

German giants Borussia Dortmund’s affiliation with the song dates back to 1996, when a band from the region, Pur Harmony, covered the classic themselves.

In April 2016, speaking to Liverpool’s official website before the Reds met Dortmund in the Europa League quarter-finals, frontman Matthias Kartner said: “We are Dortmund boys and big Borussia fans, so I gave the recording of ‘You’ll Never Walk Alone’ to our stadium speaker and he took this and said ‘very nice, we’ll try this’.”

Indeed, it caught on instantly in Dortmund, so much so that that meeting between Jurgen Klopp’s current and former clubs led to a stadium-wide rendition of one of football’s most recognisable songs:

It’s widely Liverpool claimed YNWA as their own first in football, then, with the song title now emblazoned on their crest and in iron on their Shankly Gates, which were erected in 1982.