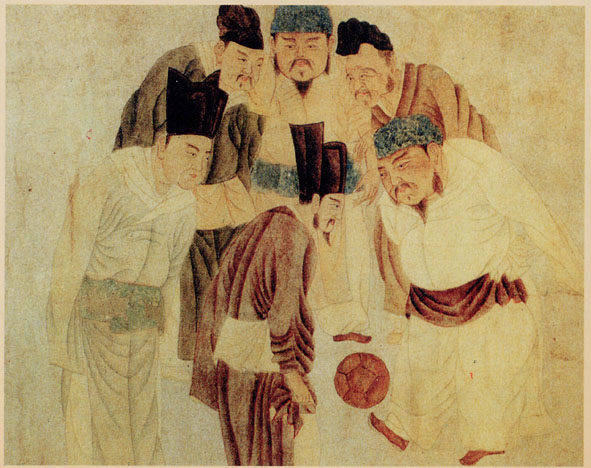 It’s the biggest sport on the planet, played by more than 240 million people around the globe. Whether it be on the street, in the park or on the pitch, you’re never far from a game of football.

But have you ever wondered about when and where football started in the world, and how it came to be such a popular phenomenon?

When Did Football Start?

The first known examples of a team game involving a ball stems from old North American cultures more than 3,000 years ago. Apparently, the ball, which was actually a rock, would symbolise the sun, while the losing team’s captain would be sacrificed to the gods.

The earliest form of a ball game involving kicking is from a military manual in the second and third centuries BC in China. It was called Cuju, and involved of kicking a leather ball filled with feathers and hair through an opening only 30 – 40cm wide into a small goal fixed on long bamboo canes. Supposedly, a player would have to use his feet, chest, back and shoulders while trying to control his opponents’ attacks, while handling the ball was forbidden.

Where Football Was Originated

Another early form of the game is the Japanese Kemari, which began between 500 and 600 years later and is still played today. Whereas Cuju is a more competitive sport, here, players stand in a circle and pass to each other, in a relatively small space, trying not to let the ball touch the ground.

Much livelier variations of the sport include the Greek ‘Episkyros’, of which little else is known today, and the Roman ‘Harpastum’, where two teams would aim to get a smaller ball over their opponent’s boundary lines on a rectangular field, in a game based around trickery and deception. This was a popular game for as much as 800 years, but, though the Romans took it to Britain with them, the use of feet was extremely rare that it could hardly be described as a form of football.

But England Created The Football We Know And Love, Right?

Despite all of these wide-ranging differences in origin, it is generally accepted that England established football into the game it is recognised as today.

In that respect, you could argue that ‘football’ officially began in England in 1863, and when rugby football (i.e. rugby) and association football each became their own thing, and football’s first governing body, the Football Association in England, was created. After the first regulations had been implemented by the English, the sport only continued to develop, and the number of rules added and enhancements made to football only grew.

Indeed, even before this point, football had become incredibly popular during much of the 19th century, though the rules varied between places depending primarily on the weather. For example, Cheltenham and Rugby’s wider playing fields meant a player could fall over by several players and come out unscathed. By contrast, at Westminster, such a rough approach would have caused broken bones, so was in areas like this that the dribbling game evolved, and subsequently limited further the use of the hand.

It wasn’t until 1848, in a meeting H.C. Malden of Godalming, Surrey met with representatives from other schools and colleges in Cambridge and at drew up the laws of the game, known as ‘Cambridge Rules’. Of course, 15 years later, the Football Association was formed, and football began to take its place a more ‘official’ sport.