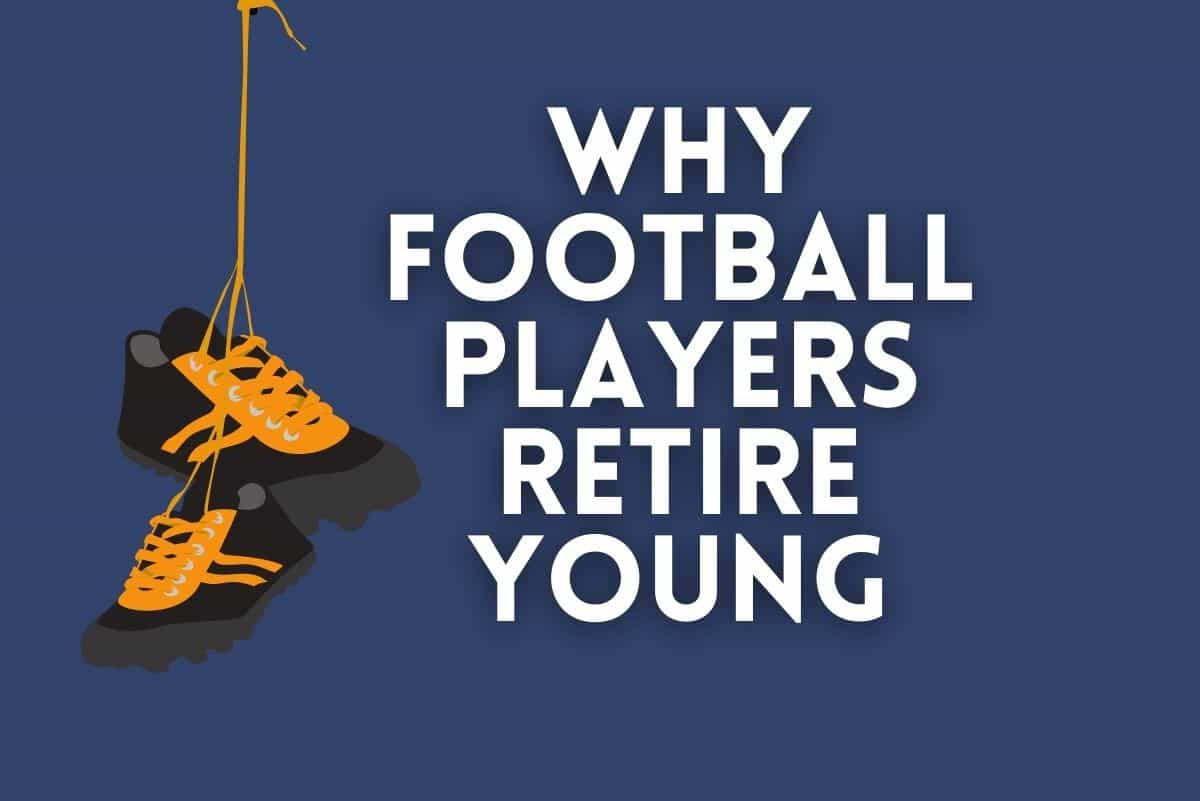 Whilst a footballer’s career is often filled with emotional events varying between glory and agony, the most dramatic moment is usually reserved for the very end, when the player finally decides to hang up his boots.

Of course not all retirements are the same. Some ensue on the pitch while less fortunate players are forced to call it day without having the chance to have a testimonial for one reason or another. But regardless of the manner, this event is simply inevitable.

Therefore, retirement eventually knocks on the door of every footballer, although in different timings.

So why do football players retire? What is the average age of retirement in the Beautiful Game? And does it differ based on the playing?

Time to dive into the matter.

Why Do Footballers Retire?

The reasons that prompt footballers to retire vary between one player and another. The list includes physically declining, injuries, lack of motivation and passion, the need to spend more time with loved-ones or even financial satisfaction.

The declining physical aspect is arguably the most common reason on the list. Football is an extremely demanding sport from a physical standpoint, and at a certain age, the level of stamina and the ability to recover decreases, which naturally impacts the player’s level. Even the most talented of footballers begin to struggle on the technical level once their tired legs start to betray them.

While some will be able to cope with a declining endurance level, injuries are a more devastating factor. When it comes to avoiding knocks, fortune plays a significant role. While some manage to remain healthy for the vast majority of their playing days, others are forced to spend large spells on the sidelines. A player’s tendency to get injured naturally increases with a age, and when setbacks start to pile up, they ultimately take their toll on the player’s physical and mental conditions.

But even those who remain healthy could contemplate retirement once they begin to lose their passion for the sport. Now surely the grand clashes will always have an eternal appeal, but being a professional footballer requires daily training, constant travelling and attending media events on some occasions, which can be exhausting. So while some would gladly perform all these tasks, it can drive others away from the game, especially after gaining enough money which allows them to live a luxurious life.

Nonetheless, we should also mention that decisions of such paramount importance aren’t always taken solely based on the player’s own desires. By the time they reach their mid-thirties, most players have families of their own at that point, and their personal circumstances largely affect whether they can prolong their careers or call it a day. Let’s just say that father time isn’t to be underestimated.

Some players end their careers at a relatively early age while others manage to push the deadline further, but eventually, all footballers have to retire.

Football is a highly demanding sport on the physical level, and it’s hard to imagine a 50-year-old player chasing behind a speedy 23-year-old winger. So while other sports like golf and snooker can be a safe haven for aging veterans, football is less kind on the old.

Therefore, retirement is a must for any football player… Well, maybe expect for Kazuyoshi Miura, who remains active in his mid-fifties. Will the legendary “King Kazu” ever retire? We certainly can’t speak on his behalf.

What Age Do Footballers Stop Playing?

While there isn’t an exact age for footballers to retire, the largest host of professional players hang their boots between the ages of 33 and 37, with 35 being the accepted average.

While some professions have laws that regulate the retirement age, this isn’t the case for football, nor any other sport for that matter. After all, football is an equal-opportunity game that allows anyone to take part if he’s able to cope with the challenges and cement himself a spot, regardless of his age.

So as long as a player is healthy and able to deliver decent showings, he’d probably opt to extend his career rather than relying on a pension in some cases.

As we mentioned above, the average retirement age for footballers is somewhere around 35. However, the situation differs between one playing position and another, as we’ll see in the paragraphs below.

When Do Goalkeepers Retire?

According to ASCFootball, most goalkeepers retire between the ages 36 and 42. As we all know, the goalkeeping position is the least physically demanding role on the football pitch, which explains why custodians cope better with age than outfielders.

While a shot-stopper has to be fit and agile to pull off acrobatic saves, he doesn’t have to sprint nor run all over the field, which allows him to extend his playing career if he wishes. For instance, Juventus and Italy legend Gianluigi Buffon remains active well into his mid-forties.

When Do Defenders Retire?

The difference is due to the fact that fullbacks have a more physically-exhausting role, as they have to dart up-and-down the flank, while a centre-back occupies a more stable position on the field and is rarely asked to sprint.

Therefore, some fullbacks end up switching into a more central role when they reach the autumn of their careers in an attempt to prolong their days on the field. For instance, Milan legend Paolo Maldini made his bones as a left-back, but it was his shift to the central defender role that allowed him to play at the top level until the age of 41.

When Do Midfielders Retire?

Midfielders are usually those who do most of the running on the pitch and are embroiled in never-ending duels throughout the match. Therefore, their retirement average age is between 30 and 35, making it the lowest amongst all playing positions.

However, we should note that there are a various types of midfielders in the game, and playmakers tend to age better than enforcers or destroyers.

Former Milan and Italy teammates Andrea Pirlo and Gennaro Gattuso make for a great example. The two stars are almost at the same age, and played side-by-side for around a decade. But at the age of 31, Gattuso’s body no longer permitted him to chase the ball and terrify his foes as he famously did during his heyday. On the other hand, Pirlo’s unparalleled technique allowed him to deliver four more memorable years at Juventus, while his friend’s days on the pitch were dead and buried.

When Do Strikers Retire?

The retirement age of strikers ranges between 32 and 39, making it the highest amongst outfielders. That’s because a football manager wouldn’t mind seeing an aging forward neglecting his defensive duties, as long as he still possesses the clinical touch that enables him to score a timely winner.

Moreover, the centre forward role requires more experience and shrewdness than pace, which is why the likes of Karim Benzema and Robert Lewandowski consolidated their positions as arguably the best in the business after reaching their mid-thirties.