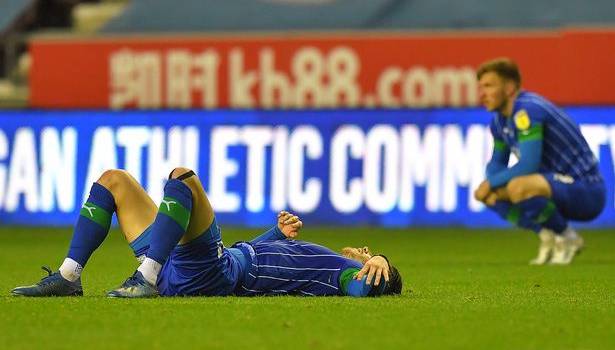 It is only seven years ago but the sight of Roberto Martinez and his triumphant Wigan players parading through the Lancashire town’s streets must feel like a scene from an altogether different lifetime.

Lapping up the adulation of their adoring masses after the club’s greatest day in May 2013, the FA Cup final triumph over Manchester City, not even relegation after a commendable eight-season stint in the Premier League could puncture the mood. What has followed since, though, might go some way to doing so.

Wigan can never have that day out at Wembley taken from them, but three relegations to League One in the seven years since have rather sapped the optimism in one of football’s more obvious ‘rugby towns’‘. The most recent of these, though, will be hardest to stomach, because it simply shouldn’t have happened.

Between New Year’s Day in 2020 and the final game of the elongated 2019-20 Championship season, only Leeds United and Brentford amassed more points than Wigan’s haul of 38 from 21 games, as the Latics shrugged off a sluggish start to rub shoulders with the mid-table dwellers and the play-off outsiders.

Then their momentum ground to an untimely halt on July 1, as the club were placed in administration, and handed the standard 12-point deduction for such a wrongdoing. Try as they might, it was an insurmountable penalty to overhaul, and Wigan were demoted back to League One on the final day.

But how did it come to this? Why did Wigan lose points, why did Wigan get relegated, and why were they allowed to fall into the hands of such unscrupulous owners?

Why did Wigan Enter Administration?

It was in November 2018 when the Whelan family, for many the face of Wigan Athletic, sold up after 23 years at the helm. Bottom of the fourth tier when former footballer Dave Whelan bought them in 1995, it was time for their own white-knuckle ride to draw to a close. Only, another far more perilous one was about to be set in motion.

Indeed, Wigan were sold to Hong Kong-based International Entertainment Corporation (IEC) for £22 million. Which, at least on the face of it, left some puzzled. Whelan had built Wigan from the ground up, funded their 25,000-seater DW Stadium himself and had a genuine affinity with the club.

At 81 years old, perhaps selling on was understandable, but to sell such a warm, community-based club to a company based on the other side of the world, registered in the Cayman Islands tax haven, seemed peculiar. Not least when Wigan are a less attractive proposition within the new ‘Hollywood of football’ that is the North West of England – why would these owners be so taken by a side then 16th in the Championship when they could have found bigger fish to fry just around the corner in Manchester or Liverpool?

To say they spent big the following summer, after Championship survival in their first year back, may be a stretch, but they certainly pushed the boat out further in 2019 than in 2018. Forwards Jamal Lowe and Kieffer Moore arrived from Portsmouth and Barnsley respectively, each for about £2.5 million. Highly-rated left-back Antonee Robinson made his loan move from Everton permanent for roughly £2 million. Per transfermarkt, it is estimated Wigan spent in excess of £7 million on new additions in 2019-20, as opposed to £4.5 million the previous campaign.

Then, on May 29, 2020, as English football’s coronavirus-enforced three-month suspension neared its conclusion, IEC announced it had sold Wigan for £17.5 million, as well their full repayment of the £24.6 million it had put into Wigan. The buyers were revealed on June 4 as Next Leader Fund (NLF), another Hong Kong-based, Cayman Island-registered group, with general partner Au Yeung Wai Kay becoming a club director.

The EFL approved the initial NLF takeover, as well as Au Yeung’s subsequent total buyout of the club on June 24 – he is now thought to own 100 per cent of Wigan Athletic. A week later, with at least £6 million owed to non-football creditors, Au Yeung placed the club into administration, rather than continue to fund the club he had only just taken total control of.

It has since been revealed, shockingly, that he even enquired about putting the into administration before taking over, once again calling into question the validity of the EFL’s ‘fit and proper persons’ test for prospective new owners.

The move shattered both the club and the community of Wigan. The town’s Labour MP, Lisa Nandy, labelled the plight into administration a ‘major global scandal’, while she and Greater Manchester mayor Andy Burnham have both called for an investigation into the takeover. Less than a week after the news, administrator Gerald Krasner revealed that 75 employees at the club had been made redundant. An exodus of playing and coaching staff soon followed.

Why Did Wigan Get 12 Points Deducted?

Because EFL rules state that a 12-point deduction is the automatic penalty imposed on clubs who enter administration, as Wigan did on July 1.

Had Wigan finished 12 or more points clear of the Championship drop zone in 2019-20, their deduction would have been floated into the 2020-21 season, meaning they would have started the new campaign on -12 points.

As it is, despite that Herculean effort in the second half of the season, including wins away at the both of the eventual top two, Leeds and West Brom, and an 8-0 evisceration of Hull City, this hill proved just too steep to climb.

Without the deduction, Wigan would have finished 13th on 59 points, a stunning turnaround considering they were two points adrift of safety in 23rd on January 18. But subtract 12 from that total and only Hull managed a smaller haul, with Barnsley on 49 points the beneficiaries of Wigan’s sanction, finishing 21st and surviving by the skin of their teeth.

An appeal inevitably followed on the grounds of ‘force majeure’ – i.e. unforeseen circumstances beyond the control of the involved parties, namely the coronavirus pandemic in this case – but despite the club stating what they considered a strong case, it was rejected on August 4, with the final and legally binding ruling from an independent arbitration panel confirming Wigan’s return to the third tier.

In a damaging season for the EFL, which saw Bury expelled from League One, Bolton saved from a similar fate at the eleventh hour, Macclesfield deducted 17 points for missing payment of players’ wages, Sheffield Wednesday docked 12 points for the 2020-21 campaign for breaching financial rules and Derby County still in the lurch for similar offences, Wigan’s plight was the latest sorry, bruising episode for an organisation which many feel has an awful lot to answer for.

What Next For Wigan?

Well, their immediate future lies, of course, in League One, but you sense that there will be no middle ground with Wigan; that they will either continue to be asset-stripped and plummet even further into the doldrums, or that they will be saved and rejuvenated by a legitimately decent new buyer.

Even before the decision on the appeal was made, manager Paul Cook resigned, telling Wigan Today this week that he felt undermined by administrators agreeing to sell striker Moore to QPR two days before their date with destiny in the final game of the season against Fulham. A new boss has yet to be appointed, with Cook’s assistant Leam Richardson taking temporary charge. First-team coach Anthony Barry looks set to move to Chelsea, meanwhile.

On the pitch, there have, obviously, been no incomings, but a whole host of outgoings. At time of writing, ten players have left Wigan this summer, including Moore and Robinson, as well as the club’s brightest youth prospects such as striker Joe Gelhardt and midfielder Jensen Weir. With further departures, including Lowe, expected before the League One season begins on September 12, quite how threadbare Wigan’s squad will be when they kick off the new campaign at Ipswich that day remains to be seen.

As for the ownership situation, Wigan remain mired in administration with up to 60 potential investors having been linked with the club, but nothing concrete has transpired as yet.

Au Yeung did, at least, agree to waive the £36 million owed to him by Wigan on August 20, but the former owner could have sent a proud club long synonymous for punching well above its weight spiralling into an interminable decline.

One thought on “What Happened to Wigan Athletic?”