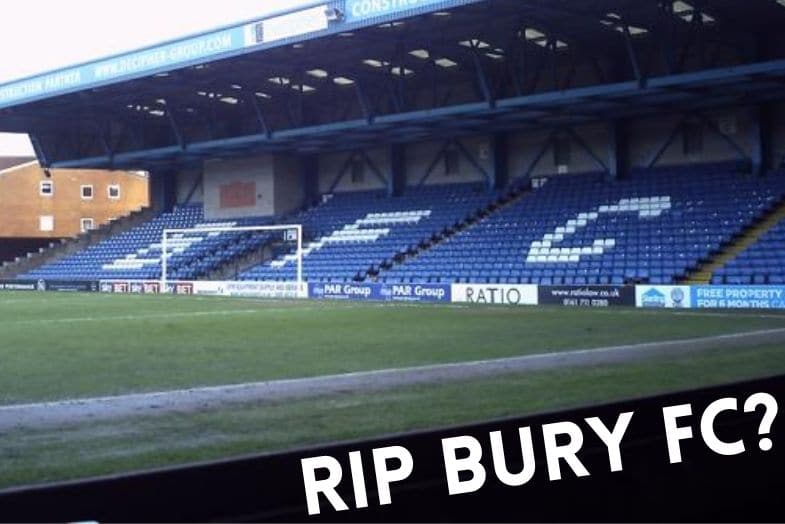 On August 27th, 2019, Bury Football Club was expelled from the English Football League following a devastating financial crisis. The 134-year old football club, which had been one of the oldest clubs in English football, became the first team to be kicked out of the EFL in nearly 30 years.

After a rollercoaster 2018-2019 campaign which saw the club promoted to League One, the reveal that the club would struggle to pay off creditors, and the sale of Bury F.C. for £1, the demise of the club has been a shocking reminder of how much importance money has in modern football.

But why exactly were Bury F.C. expelled from the Football League? And what has happened to the club, players, and supporters since?

Why Was Bury FC Expelled from the Football League?

Bury Football Club was expelled from the Football League because they were unable to meet a 14-day deadline requiring information that proved they were financially sound and able to pay off their debts to creditors.

As the club was already in financial debt back in 2018, then-owner Stewart Day sold Bury F.C. for an astonishing £1 to Steve Dale with the club’s overspending in recent years causing a financial crisis for the foreseeable future.

At this point, players and staff were being paid late followed by a winding-up petition being filed against the club. The High Court adjourned the petition three times before it was eventually dismissed on July 31st.

Under the EFL ruling, a 12-point deduction was then handed to the League One club after creditors had approved a company voluntary arrangement (CVA) that was put forward by Dale. A hefty point deduction had been seen in the past with other EFL teams, leaving many Bury fans fearful of what would eventually follow.

The CVA was proposed to help settle some of the club’s debts, meaning unsecured creditors, including HM Revenue & Customs, would be paid 25% of the money owed back to them, further breaking EFL ruling for financial stability.

With all this financial uncertainty, the EFL were unsatisfied that Bury F.C. had provided enough evidence of their financial viability as a Football League club. This led to several fixtures being postponed as the EFL awaited clarity that Bury could financially support itself.

Eventually, Bury were given a 14-day deadline on August 9th to provide the necessary information or face expulsion.

Despite a late ember of hope for supporters and staff from the possible purchase of the club from C&N Sporting Risk, the deal fell through meaning that Bury Football Club joined the growing list of clubs that were sent into administration and was officially expelled from the Football League after 134 years of being a longstanding member.

As Bury F.C. fell into administration, it is unable to sign up as a National League side until members of the club can prove that it can be run in a financially sound way. Bury F.C., therefore, has not played a game since 2019 and is not listed in any league table in the English football system.

The EFL initially revealed that the club was free to make an application to the Football Association to rejoin league competition further down the English football pyramid from season 2020-21, however at the time of writing this, they have yet to do so successfully.

After the club’s expulsion, all of the coaching staff and players were forced to move elsewhere as free agents with manager Ryan Lowe moving to Plymouth Argyle and winning automatic promotion in the 2019-2020 season from League Two.

Is Bury FC Coming Back?

Despite falling into administration, there is hope for a Bury F.C. revival as a group of 300 some Bury fans joined together to purchase the iconic Bury stadium, Gigg Lane, and started a phoenix club that trades under the name Bury A.F.C.

The group who purchased the club called Est. 1885, paying homage to the club’s original founding in 1885, have plans to one day return to officially using Bury Football Club as their official club name.

Bury F.C. remain, however, they were denied a place in the National League when attempting to reapply due to the club’s financial resources, ownership, and insolvency status.

What Are Bury FC Called Now?

Bury A.F.C were successful in their application to join the North West Counties League and are now top of the 10th division table by seven points and look almost certain for promotion this season.

Is Bury AFC the Same as Bury FC?

The fan group who started the phoenix club, Est 1885, were created by over 300 Bury F.C. fans who wanted their club to never again fall into financial ruin due to decisions not under the fan’s control.

Bury A.F.C were successful in their application to join the North West Counties League for the 2020-2021 season and now play in the 10th-tier of English football (Division One North). In their first match, the phoenix club won 5-0 to give hope for a swift revival out of non-league and back into the EFL.

The fan group were also aided by a government-run community ownership fund which provided £1 million towards the purchasing of Gigg Lane.