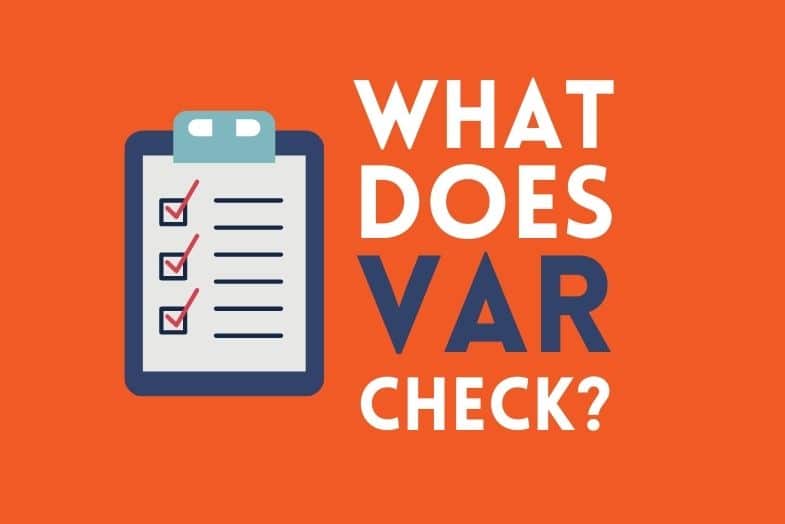 Football is always full of controversy. Missed fouls like handballs, penalties and offsides are common. Or even dastardly players getting away with diving to win free-kicks and penalties. Love it or hate it,  these types of mistakes are just part of the game.

For many, the drama of missed and bad calls in football is part of its charm.

It gives us something to talk about at the “water cooler” on Monday or in the team Slack channel. A decision may even make one wonder how much do these referees get paid?

But perhaps, equally as controversial, is football’s solution to referee mistakes. VAR is still in its infancy as far as world football is concerned. Fans, managers and players alike are all figuring it out. And if you fall into any of those categories, you’ve come to the right place!

Does VAR Check Everything?

VAR does not check everything that happens in a football match. VAR is used only for “clear and obvious errors” or “serious missed incidents” in situations that can change the match. This involves four areas of the game; goals, penalty decisions, direct red-card incidents, and mistaken identity.

VAR does not check for yellow cards. But if a wrong player is cautioned, VAR may step in to ensure the referee corrects their mistake. And in the case of a yellow card resulting in a penalty, the on-field referee can be notified to review the play if the decision is a “clear and obvious error”.

Can VAR Give a Yellow Card?

VAR cannot give a yellow. If a player is deemed to have dove in or given a foul during one of the four game-changing situations that VAR applies to, then the referee will be prompted to at least review the play. Whether or not a yellow card is given is up to the discretion of the referee.

Can VAR Give a Second Yellow Card?

Does VAR Check Every Goal?

VAR checks every goal. This is because goals are a match-changing situation. During a goal, VAR will check for the following: attacking team commits an offence, ball out of play, the ball crossing the goal line, offside, handball, offences and encroachment during penalty kicks.

Can VAR Give a Free Kick?

VAR cannot award a free-kick. However, if an offence has been committed during one of 4 match-changing situations, VAR can make a recommendation to the referee or ask for them to review the play. In many circumstances, this prompting may lead to a referee decision to award a free-kick.

Can VAR Be Used After Full-Time?

VAR can be used after the final whistle. If a play in the dying moments of a match is under review, VAR will notify the referee. The referee will stop play while awaiting the decision from VAR. Once a decision is made, the match is either over, or a free kick or penalty will be awarded.

With time up, the referee will blow the whistle one time to stop play and put their finger to their left ear and palm out to indicate that VAR is checking the decision. If the review advises a decision to be made. They will then either blow again to end the match or indicate the result of any decision such as a free kick or penalty.

What Can VAR Overturn?

When a play is reviewed, offences like fouls and handballs are checked as well as things like offsides and out of bounds. VAR can be used to overturn incidents during four match-changing situations:

Goals or no goal

Penalty or no penalty

Mistaken identity in awarding a red or yellow card

Can VAR Overturn a Yellow Card?

During a match-changing situation like a goal or penalty, VAR will review the play and consult the referee if necessary. But ultimately, the decision to overturn a yellow card lies with the referee. But if a yellow card is given to the wrong player, VAR will also notify the referee.

VAR can also help the referee to correct any cases of mistaken identity. In this case, a yellow card would still be awarded but to the player who committed the foul and not the player already on a yellow. This is a crucial game-changing mistake. By allowing the previously cautioned player to (correctly) remain on the pitch, the match remains untainted.

Can VAR Overturn a Red Card?

If a player receives a red card via a second yellow, this will not necessarily require a check with VAR. A review would only apply if the second yellow was awarded during a match-changing situation.

Can VAR Overturn a Penalty?

VAR can help a referee to overturn an awarded penalty. When a penalty is given, VAR will check for attacking player offences, if the ball goes out of play, and the location of the offence. If VAR believes the penalty was given incorrectly, they will notify the referee to make a decision.

Can VAR Overrule the Referee?

VAR cannot overrule the referee. VAR can only review plays during match-changing situations. For these plays, VAR can make a recommendation or ask the referees to review the play themselves. But ultimately, it’s up to the referee. In this case, the referee can overrule VAR.

VAR has been implemented in international football and domestic football leagues like the English Premier League. As it becomes more prevalent, fans and players will get more used to it. But if the solution to a problem is becoming a problem itself, is it time to rethink the use of VAR?

Whatever the answer, VAR looks like it’s here to stay. And hopefully, its use will become more efficient and effective as it gets its sea legs with regular use.