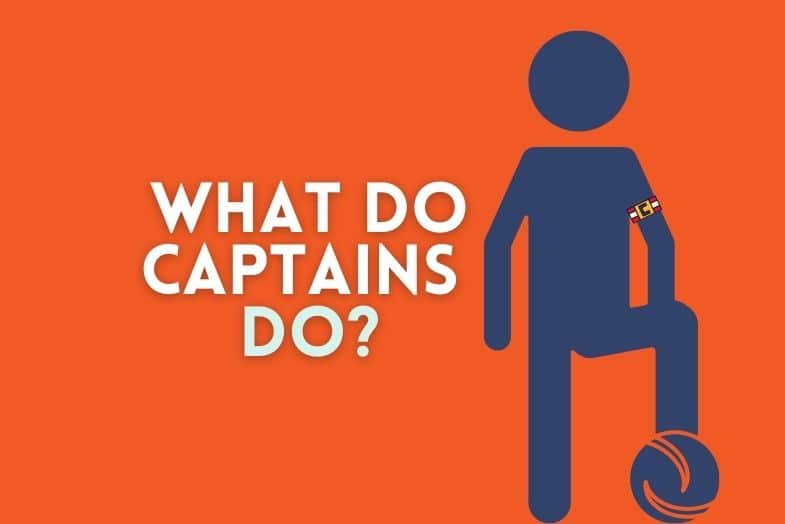 Captains have become a vital position in modern-day football, with many of the game’s greatest ever players donning the armband for club and country.

From legends like Johan Cruyff and Roy Keane to more recent players like Giorgio Chiellini and Manuel Neuer, the role of a captain is a respected and admired position that requires several important traits to be successful.

But what are the responsibilities of a football captain? Which position do captains usually play in? And do they receive extra pay for their role in the team?

Join us as we go through the role and what is needed for a captain to succeed.

What Are the Official Duties of a Football Captain?

As stated by the ‘Laws of the Game’, a football captain’s only official responsibility is to participate in the coin toss to decide which side will take kick-off and which side would take the first kick in a penalty shoot-out.

Usually appointed at the start of a season, captains also have several unofficial duties with their respective league clubs. The club captain generally leads their team out onto the pitch at the start of a match and is tasked with ‘running’ the dressing room.

They also can be looked to for a rallying point for the team, this could be when the team’s spirits are in need of lifting when morale may be decreasing. Depending on the club, a captain may join the manager in deciding the starting eleven for a fixture, however, this practice is seen more in lower-division football rather than the top European leagues.

If a captain is unable to play or be selected for a certain game, the club’s vice-captain assumes the captain’s role and responsibilities.

What Makes a Good Football Captain?

One of the main traits for a good football captain is to be a strong leader for their fellow players, with countless iconic captains in football history demonstrating an authoritative and commanding presence.

Many of the game’s legendary captains have been assets both on and off the pitch, offering an important link between the team and the head coach/manager of their club.

Other traits for some of football’s greatest captains include a strong tactical understanding of the game, handling pressure well and communicating effectively with the referee during a match.

Do Football Captains Get Paid More?

Although captains hold a high position within a football club, they do not receive any extra financial benefit for holding the captaincy.

As a captain, the players are more likely to receive additional advertisement deals and promotional benefits for their club and other marketing companies. Sky Sports often use key players such as captains to advertise important fixtures for the Premier League, further enforcing their role in the club and the match itself.

Why Do Football Captains Have Armbands?

Used as a form of identification, captains wear armbands so that the referee, officials, teammates and manager can identify the captain easily on the pitch. As the captain has additional responsibilities compared to their teammates on the pitch, it is important to stand out when needed.

The captain’s armband is traditionally worn on the left sleeve and can vary in different colours. Players occasionally wear an armband on their right arm, however, this can be to respect or raise awareness for certain occasions such as a black armband for any recent tragedies in the sport.

What is the Most Common Position for a Captain?

The most common position for a Premier League captain is central defender, with nine of the 20 club captains playing at the heart of the defence for their respective teams.

As a football captain needs to be able to motivate their entire team, it is unsurprising that the majority of Premier League team captains are based in the central positions on the pitch.

Being located centrally allows captains to communicate equally with the majority of their team, with 18 of the 20 Premier League clubs having central players as captains.

Interestingly, the two Premier League captains that do not play centrally are both right-backs – Seamus Coleman for Everton and César Azpilicueta for Chelsea.