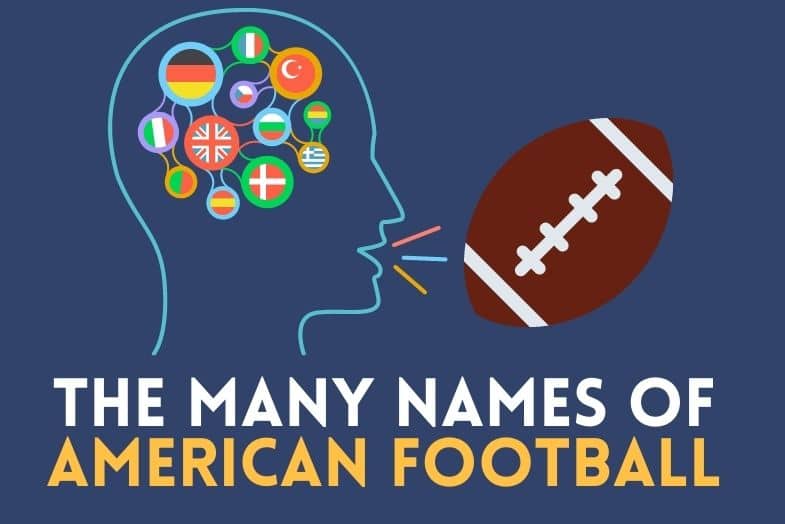 American football has continued to spread throughout the world due to its dominance in TV ratings and revenue. It’s becoming more common even here in Britain for people to stay up late one Sunday a year to tune into the Super Bowl.

On this side of the pond, we call the sacred yet brutal sport “American football.” Of course, “football” only means a game played on a gridiron with an oblong-shaped ball when used in America. In the USA, people call the beautiful game “soccer”.

Ever wonder what French fries are called in France or what Colombian coffee is called in Colombia? We’ll go ahead and let you take a wild guess. If you managed to come up with something like “fries” and “coffee” then you must at least be literate.

But what about other parts of the world. What do you call American football?

How Did “American Football” Get its Name?

American football originated in the mid-19th century. The game was a combination of rugby football and association football. As the rules of the game evolved it became a uniquely American sport and referred to simply as “football” in its home nation.

What is American Football Called in America?

In the US, “American football” is simply called “football”. It is one of the 4 major sports in the US and is the most popular in the country. Americans call association football “soccer” to distinguish it from their homegrown sport.

The Super Bowl is one of the most-watched sporting events in the world and is typically number 1 for American TV ratings each year. By revenue, the NFL is the richest sports league in the world.

What is American Football Called in Different Countries?

American football goes by many names depending on where it is being played or seen. In the US, it is called “football”. Terms that translate as “gridiron” or “American football” are used to distinguish it from their own versions of football or rugby including association football.

What is American Football Called in the UK?

What is American Football Called in Europe?

In Europe, association football is king. Football that is played on the gridiron in North America is always referred to as “American football” to avoid any misunderstanding or confusion.

What is American Football Called in Australia?

The terms “American football” or “gridiron football” are used by Australians when discussing the American sport of football. This is not to distinguish the sport from association football which the Aussies call “soccer” but to separate it from Australian rules football.

What Do Other Countries Call American Football?

American football is mainly a blend of two European sports, association football and rugby. The sport has become one of the most popular in the world and is king in America. Outside of the US and Canada, it will always be referred to as “American Football” where other sports are more popular.