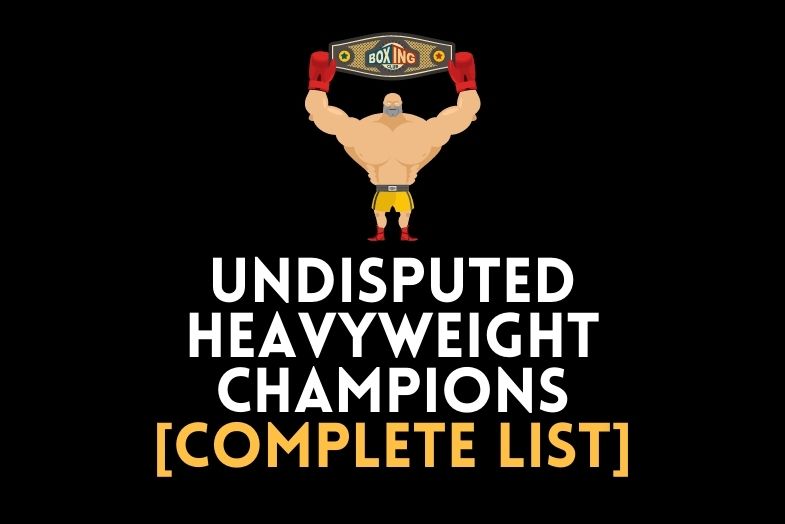 When it comes to boxing, the casual fan might struggle while trying to track the title picture within the sport’s numerous divisions.

With several organizations all crowning world champions left and right, the top of the divisions can be a bit chaotic.

But in some instances, a certain boxer manages to subjugate all of his rivals and conquer the weight class by winning all world title belts (or at least the ones that truly matter).

Such occurrences can be a blessing for the sport’s promoters. Whether the fans decide to cheer for this “super champion” or root against him, it doesn’t matter, as long as the division would be ruled an ultimate king with an unquestionable claim to throne.

So what the is correct term used to describe such a champion? What is the difference between “undisputed” and “unified”? Who were the undisputed heavyweight champions in the sport’s long history? And was Mike Tyson one of them?

Here’s your undisputed source for all the answers.

What Does “Undisputed” Mean in Boxing?

In boxing, an undisputed champion is a boxer who conquers a weight class by winning all of the recognized world title belts.

Therefore, in order to define which champions can be described as “undisputed”, we must first determine the organizations that hand legitimate title belts.

In the current day and age, we have numerous sanctioning bodies trying to gain the recognition of observers and fans alike.

So nowadays, a boxer who wins all four belts handed by the organizations mentioned above in the same weight class would then be called the “undisputed champion”.

But this description depends on the era. For instance, the WBO was only fully recognized by the other major sanctioning bodies in 2007, so prior to that year, winning world championships for the WBA, WBC and IBF was considered to be sufficient for the boxer to be crowned undisputed.

While an undisputed champion is a boxer who manages to win world title belts across all global organizations in the same weight division, a unified champion is one who wins two or more belts in the same division but without conquering all recognized belts.

In the current era, a boxer needs to grab gold in WBA, WBC, IBF and WBO in order to become the division’s undisputed champion. On the other hand, a boxer who holds two or three belts in the mentioned organizations will be recognized as a unified champion.

What is a Unification in Boxing?

A unification in boxing is a bout between two champions from different organizations who are putting their respective titles on the line. Effectively, each boxer is defending his own belt (or more) while acting as a challenger for the opponent’s title.

As one would expect, these type of fights are extremely popular with the fans, as they aim to determine the best of the best.

If each fighter holds a championship belt for one sanctioning body, then the winner of the bout will become a unified champion.

However, if the two fighters hold between them all four major titles, then the outcome of the fight will be the crowning of a new undisputed champion inside the squared circle.

Who Was the Last Undisputed Heavyweight Champion?

The last undisputed heavyweight champion was the legendary Lennox Lewis who held the honor between November 1999 and April 2000.

“The Lion” won his first world title in 1993 when he was promoted by the WBC. Although he lost the belt to Oliver McCall in 1994 (which was his first professional defeat), he would later regain it after winning a rematch in 1997.

That proved to be the Brit’s ticket towards greatness, as it paved the way for a unification bout against the great Evander Holyfield, who at the time held the WBA and IBF titles.

While the first bout ended in a draw, Lewis saw his hand raised following a unanimous decision win in the rematch, thus becoming the WBC, WBA and IBF champion (while also winning the vacant IBO title).

At the time, Vitali Klitscko was the reigning WBO heavyweight champion, but that didn’t matter much in the equation, as the WBO was only fully recognized as a major organization in 2007.

So at the time, winning the championship belts of the WBC, WBA and IBF was deemed sufficient for Lewis to become the undisputed champions of the heavyweight division and the ultimate star of the sport fondly known as “the sweet science“.

Unfortunately for him, politics once again reared its ugly head to ruin the great fighter’s undisputed status. Both the WBC and WBA had their own mandatory number one contenders. Lewis opted to fight Michael Grant instead of John Ruiz. The latter went on to win a court decision forcing the WBA to strip “the Lion” out the belt in 2000.

As a result, Lewis was no longer the undisputed heavyweight champion, as the decision stripped him from one of the three major belts.

Since then, no heavyweight has been able to unify these three belts alongside the WBO which became recognized as the fourth major belt since 2007.

Between 1963 and 1983, holding the WBA and WBC belts was sufficient to earn the “undisputed” tag. Then, the IBF world title was added to the equation. Starting from 2007, the WBO became the fourth recognized organization, adding yet another task for any boxer who wishes to become the ultimate king of his weight class.

Since the beginning of a modern era in boxing, only ten heavyweights were recognized as undisputed champions.

So let’s take a look at men who managed to join this elite club.

Was Mike Tyson the Undisputed Champion?

Between August 1987 and February 1990, Mike Tyson reigned as the undisputed heavyweight champion while identifying himself as “the baddest man on the planet”.

At the age of 20, “Iron Mike” won his first world title by knocking out Trevor Berbick in the second round and becoming the WBC heavyweight champion in the process.

In 1987, Tyson won the WBA title in a unification bout against James Smith. Later that year, he bested Tony Tucker to add the IBF belt to the fold, therefore becoming the undisputed heavyweight champion.

Following six successful defenses, he lost his belts to Buster Douglas in major upset following a 10th round knockout in February 1990.